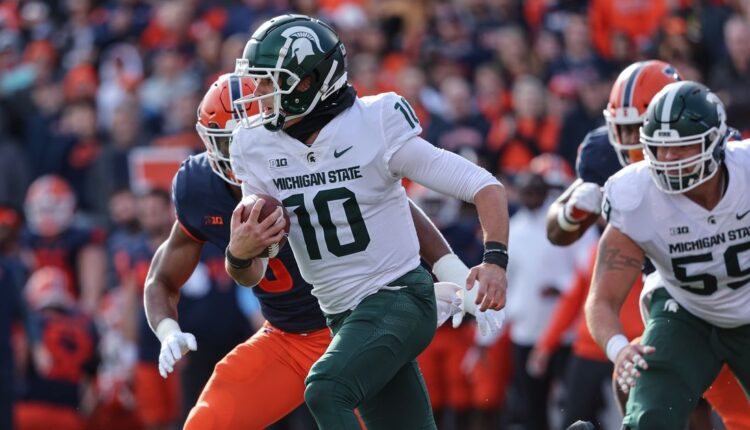 Maryland football returned from its bye week to take on Wisconsin in a Big Ten battle at Camp Randall Stadium in Madison, Wisconsin.

The Badgers dominated, though, and Maryland fell to 6-3 on the season with a 3-3 record in Big Ten play. Next, Maryland will wrap up its two-game road trip next Saturday in a matchup with No. 15 Penn State.

All 14 Big Ten teams were in action this week, highlighted by statement victories and a few deflating losses.

In one of the best games Saturday afternoon, Michigan State head coach Mel Tucker and the Spartans made their way to Memorial Stadium in Champaign, Illinois, for a conference tilt with Illinois.

Following a short Michigan State punt, Illinois looked to get off to a good start on its home turf. With under nine minutes in the opening quarter, the Fighting Illini needed just two plays for senior quarterback Tommy DeVito to find sophomore wide receiver Isaiah Williams over the middle. Williams caught the ball in traffic and then proceeded to evade tacklers for a 60-yard touchdown, giving the Fighting Illini an early 7-0 lead.

Michigan State responded immediately with a 15-play, 72-yard drive that ended with the Spartans settling for a 21-yard field goal by junior kicker Ben Payton.

Trailing 7-3, the Spartans received the ball with a chance to trim their deficit or take the lead with a trip into the end zone.

Coming out of halftime, both teams traded punts after unsuccessful offensive drives.

With momentum shifting toward Michigan State’s sideline, the defense forced a fumble from DeVito to give the Spartans good field position to score again.

Michigan State took advantage of the turnover, as Thorne found senior wide receiver Jayden Reed for a 16-yard touchdown. The Spartans took a commanding 23-7 advantage late into the second half.

Illinois would not quit, instead responding on the next drive. DeVito connected with Williams again on a 7-yard touchdown, and the Fighting Illini converted the two-point conversion. It wasn’t enough, though, as Michigan State held on for a 23-15 victory.

The Spartans defense limited the Illinois run game to 3.3 yards per carry and the ability to control the game was a key factor in the outcome.

Illinois will look to rebound next week when Purdue comes to town, and Michigan State will clash with Rutgers.

Maryland head coach Michael Locksley took his team on the road for a highly anticipated noon showdown with the Wisconsin Badgers.

The forecast called for rain showers and heavy winds, and that was evident throughout the first half.

The Terps’ offense struggled to maintain drives, as they recorded a half-dozen three-and-outs in the first half.

Maryland came out of the second half seemingly with an emphasis to string together a quality drive that could fuel its comeback attempt.

Maryland redshirt junior quarterback Taulia Tagovailoa led the Terps on a 12-play, 43-yard drive, but a crucial sack would force the Terps to settle for a field goal attempt. Senior kicker Chad Ryland sent a 39-yard field goal through the uprights to trim Maryland’s deficit to 17-3.

But the Badgers responded, extending their lead to 20-3 on a 35-yard field goal by Van Zelst.

Maryland’s defense was effective in forcing Wisconsin’s offense to settle for field goals when in scoring territory.

Tagovailoa and Maryland’s offense trotted onto the field, as they looked to orchestrate a drive that would hopefully end in a touchdown for the Terps. The star signal caller made an errant throw that ended in an interception by sophomore safety Hunter Wohler.

With under a minute to go, Maryland finally found the end zone on a 12-play, 73-yard drive. Tagovailoa found sophomore wide receiver Tai Felton in the back of the end zone for a 5-yard touchdown.

The Badgers will travel next Saturday for a conference matchup with Iowa.

Iowa made the trip to Ross-Ade Stadium in West Lafayette, Indiana, for a clash with Purdue.

The game began as a defensive battle between the two Big Ten West programs.

Early in the second quarter, Iowa looked to break the ice and record the first points of the game.

On the ensuing possession, Purdue senior quarterback Aidan O’Connell misfired, as Iowa senior defensive back Kaevon Merriweather intercepted the pass to give possession back to his offense.

Iowa needed only three plays for Petras to deliver a strike over the middle for a 29-yard touchdown to senior wide receiver Nico Ragaini. Petras’ second touchdown of the day extended Iowa’s lead to 14-0.

With a two-possession deficit, Purdue received the ball with a chance to get back into the game.

O’Connell attempted to make a simple check-down pass, but the ball was tipped off the hands of junior running back Dylan Downing. Iowa senior linebacker Seth Benson made an athletic dive for the Hawkeyes’ second interception of the game.

Iowa ultimately put the game away on the first drive of the second half. It took just two plays for freshman running back Kaleb Johnson to take a carry 75 yards for a touchdown. Johnson’s touchdown helped Iowa Cruise to a dominant 24-3 victory.

Following an early-season three-game losing streak, Iowa has won its last two games by a wide scoring margin of 57-16. On the other hand, Purdue has dropped its past two games, also falling 35-24 to Wisconsin on Oct. 22

Next week, Iowa will return home for a clash with Wisconsin. Purdue will travel for a showdown with No. 16 Illinois.

Residents, cats left without a home after Rockford fire