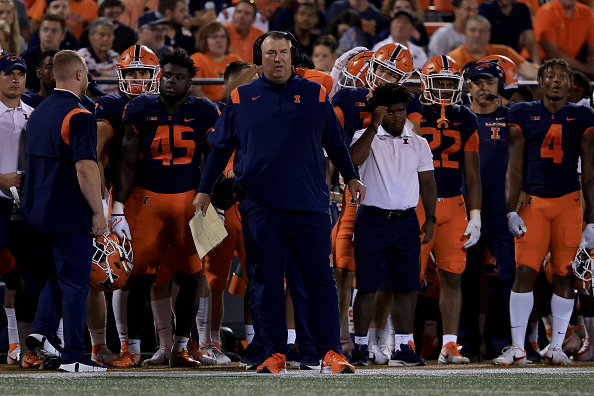 CHAMPAIGN – It’s important that the leader of a program is front and center with optimism before the beginning of a particular campaign.

Bret Bielema had that and more when he was at the lectern to discuss Illinois’ opening contest against Wyoming Saturday at 3 PM in Champaign. As the head coach entered his second season with the program, he was a little more cheery about what the Illini’s chances might be in 2022.

“There’s a really good buzz going on within our players; buzz doesn’t actually equate to wins but I do like the excitement, the energy, just the general feel of what our guys are doing,” Bielema said. “There’s so many little indicators for me as a head coach. A year ago, you guys asked me, ‘How do you feel? Is it different from the spring?’

“There’s definitely just a consistent evolution to get to where we are right now and I couldn’t be more excited.”

That level of excitement for his club, according to the head coach, is as high as it has been in his career.

“I’ve been doing this for quite a while as a head coach, I’m going into my 14th year, and to just see what I’ve seen happen from last fall when we got done, through the portal process, through spring ball, through fall camp, and now getting into game week, there hasn’t been a time where I’ve been more excited,” said Bielema. “I’m talking after a Big Ten Championship and projections to win one. This group of guys is very special.

“I think it’s going to be one of those types of years.”

That’s a bold statement from Bielema considering that he won Big Ten championships from 2010 through 2012 while the head coach at Wisconsin. Illinois hasn’t won a conference crown in 21 years and hasn’t had a winning record since the 2011 season.

In Bielema’s first season in Champaign, the Illini went 5-7 while knocking off a pair of ranked opponents in just falling short of a bowl game. This year they’ll return 12 starters from that group but feature a new signal caller, Tommy DeVito, who was officially named the starter this week.

WGN News Now previewed the Illini on “Campus Check-In” this week, and you can watch that segment in the video above.