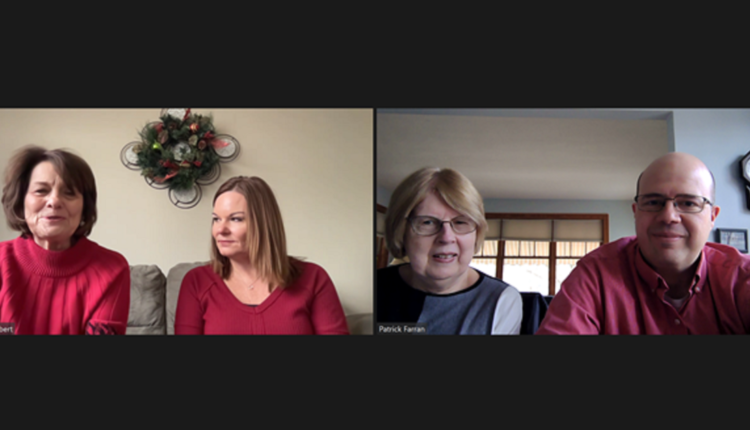 
Peggy Vaughan looked across the living room this Christmas season and beamed like any other grandmother as she admired her grandchildren.

But there’s an interesting catch here:

It would not be three of these grandchildren without Peggy’s piercing screams of desperation in an Illinois State University Union parking lot in 1980.

Peggy’s daughter Beth, the mother of her grandchildren, wouldn’t be around either.

If it hadn’t been for another woman that night – a random stranger who responded to Peggy yelling in desperation, “My child is choking!

Since that April night in 1980 that was not revealed, a Vaughan hero with no identity, her “angel” has simply remained the woman of memories who appeared shortly after a performance of “Babes In Toyland” at the ISU Union to join Beth rescue.

That night everyone went back to their cars, stunned, exhausted, relieved and grateful.

It went so quickly, no names were exchanged.

A week later, Peggy placed an ad in this newspaper: “Thanks to the lady in the parking lot of the ISU Union who saved my child from suffocating on a piece of candy,” it said. “God bless you! – Peggy and Beth Vaughn, Fairbury.”

That is, until this Christmas.

Patrick Farran was there that night in 1980.

Then Patrick, the 8 year old son of the woman rushing to Heimlich, also heard Peggy’s desperate screams and watched his own mother, a Heimlich trained nurse, come running to save Beth.

“That,” he says, “was definitely one of those moments when I was reminded that I have a pretty cool mom.”

She is Carol Farran, now in the suburbs of Oak Park, now 76 years old, a nurse in the 1970s and early 1980s living in Bloomington Normal, and also the director of the Mennonite School of Nursing here. From there she became a director at Rush University Medical Center in Chicago, which is considered to be one of the leading centers of its kind in the United States

Flick: Oh, what a great year!

“In a way, that night on Normal was just another day at the office for my mother,” says Patrick. “She was in the right place at the right time and just did what she was trained to do.”

Forever after, however, the scene stayed with Patrick.

He returned to memory at different times over the years, wondering who these people were and what had happened to them.

Six years ago, on the occasion of his mother’s 70th birthday, he searched the Internet for the advertisement The Pantagraph, which he found “emblematic of his mother’s silent legacy”.

Then, one day just before Christmas, while digging through digital files in an online search – now in Goshen, Indiana, age 49, a member of the MBA at the University of Notre Dame – Patrick found a Peggy and Beth Vaughan , listed in Bloomington, Illinois.

He took a shot that could be her.

“Is that you from that night in Normal?” He asked on Facebook.

At the end of the Vaughans there was a moment of pause and then also a rush.

“It was just amazing!” Says Beth.

A few days later they all “met” again via Zoom, even if they didn’t quite meet the first time.

At first, Peggy did it tearfully.

“It brought back ALL the memories and emotions,” she says.

McLean County’s evictions are rising and social services are working to tackle homelessness.

“Your mom was my angel that night!” She announced. “I think your mom never said a word. My mother had a car full of Girl Scouts that night. Nobody said a word the whole way home. “

And so ends and begins a 41-year-old odyssey about who was this Guardian Angel?

Ironically, although Beth Vaughan Robert never knows the identity of Carol Farran, the nurse who saved her, today she is a nurse herself. To get her education, she attended the Mennonite School of Nursing, the same school where Carol had been principal years earlier.

There is another irony.

Amidst all the emotions, both from joy and deep tears, Beth’s mother Peggy says that her first thought – when she finally discovered the identity of the woman who saved her daughter – was to hug Carol.

This hug still cannot be compared to any other. This is the very different kind of lifesaving hug that Carol Beth gave in an ISU parking lot in 1980.

Bill Flick can be reached at [email protected]

Receive opinion articles, letters and editorials straight to your inbox every week!