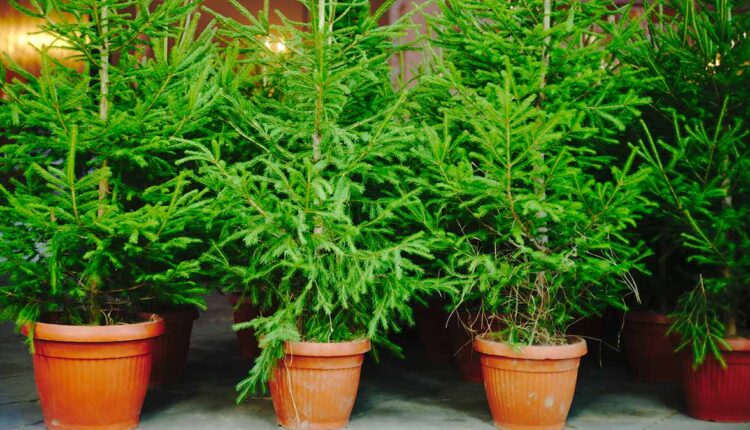 The first advantage to a potted Christmas tree is emotional, which is a perfectly good reason, particularly around the emotionally charged holiday season. If you get depressed by throwing a beloved Christmas tree on the curb (or even composting it, the eco-friendly alternative that’s available in many regions), getting a potted Christmas tree helps complete some of the guilt and pain involved in dragging the tree downstairs and letting it languish on the sidewalk for days before pickup.

“Every year we attempt to retrieve the trees, putting them all back in the mountains to keep alive for another eleven months until the following Christmas season,” says Eric Manning, owner of Plantman.com in California, who has been renting trees for 30 years.

Some companies, including Manning’s, allow you to rent the same tree year after year, in which case the tree quite literally grows alongside your family. Manning says his company carefully prunes each tree “like bonsai,” so that the trees are the ideal shape for people’s homes. “I want the perfect ratio of height to width, so I shape all varieties, including redwood, spruce, fir, and cedar,” he says.

The other advantage is that potted trees are one of the most sustainable ways to decorate your home for Christmas. Although cut Christmas trees are not as horrible for the environment as many imagine, a potted tree, whether rental or owned, has long-term environmental benefits over artificial trees in particular. Folks at Consumer Reports like artificial Christmas trees, but we have pretty strict requirements for what qualifies as a good one that will last you a long time—the only way to ensure that the reduced environmental impact over time balances out the shipping costs and landfill- bound plastic.

“Artificial trees will likely end up in landfill,” says Bert Cregg, PhD, professor of horticulture at Michigan State University in East Lansing, Mich. Cut trees can be composted into mulch, but “potted trees can be planted in a park or landscape and will continue to capture carbon from the atmosphere—and produce oxygen—as long as they are alive.”

They’re also easier to get home. “Potted trees that are rented often offer the advantage of being delivered, whereas purchasing live trees in containers (or ball-and-burlap) can be considerably heavier than cut live trees or artificial trees,” says Mike Arnold, professor of landscape horticulture and Director of The Gardens at Texas A&M University in College Station, Texas. (Ball-and-burlap trees are grown in the ground at the nursery, then dug up and placed in—you guessed it—a burlap bag before transport.)

In the example of the Plantman, trees are gently extracted from the ground, placed in a pot, and delivered to your home, to be picked up a few weeks later and replanted. The company sends along care instructions, which must be followed carefully to ensure that the tree is in healthy condition when it’s time for pickup. Other companies may keep the tree in a pot throughout the year, though according to Chris Enroth, a horticulture educator at the University of Illinois Urbana-Champaign Illinois Extension, they likely need to be repotted in a bigger container each year because, obviously, the tree gets bigger. If you plan to use the same tree each year, that could be a boon—as I wrote earlier, the tree grows along with your kids (if you have them) or simply and beautifully expresses the passing of time as it gets taller. But if your space is limited, in a few holiday cycles the tree may have grown too large for your home, in which case you’ll have to move on to a newer, younger, and smaller tree.

And generally speaking, the prices for a potted tree rental are about what you’d pay for a cut tree (although as you’ll read below, you may not get to keep the tree rental as long as a cut tree). In New York, at least, a 6-foot cut tree costs between $150 and $200; the prices for a potted tree of the same size are about the same, although your local tree prices (both rentals and cut trees) may differ according to availability.