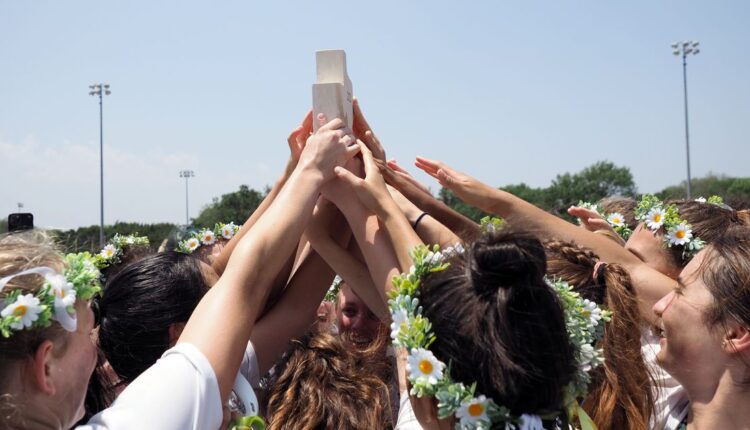 AUSTIN — Minje Kwun exploded for nine goals — including six in the opening half — as Hockaday captured his second consecutive state girls lacrosse Division I championship with a dominating 20-8 victory over Austin Westlake Sunday afternoon at St. Michael’s High School.

“Winning the championship would not be possible without having great teammates,” said a jubilant Kwun, a Dartmouth signee. “I just took advantage of my opportunities. This is all so very special. Unbelievable season.”

Hockaday Head Coach Molly Ford Hutchinson had high praise for Kwun, and her entire team. “Minje has had a phenomenal career, and she comes up so big in the big games. It was fitting that her last game in a Hockaday uniform was a great one.”

Junior goalkeeper Josie Sinwell, who had seven saves in each of the Sunday title match and the 19-13 semifinal win over Flower Mound on Saturday, also gave credit to her teammates. “I can’t say enough about my teammates,” said Sinwell. “We put the work in every day, and it has been an amazing year.”

“Josie was really patient in Goal,” added Coach Ford Hutchinson. “She really had an outstanding game today. Everyone on the team contributed. I’m so very proud of this group.”

Top-seeded Hockaday (20-1-0), after allowing a goal to begin the championship match, reeled off six consecutive goals, and rolled to an 11-3 halftime cushion. After freshman Sunnie Wang scored a pair of goals in a 27 second span in the first 1:52 after intermission, the match was played with a continuously running clock, and Kwun capped her stellar performance, slamming in the final goal with 37 seconds left, for the final margin.

Mae Flanagan, Lily Gum, Anna Gum, and Ava Tribolet each registered a goal for the champions.

Hockaday knocked off Southlake Carroll 14-11 a year ago to claim the title.

Rockwall, whose program was launched in 2017 and making its first-ever state-tourney appearance this year, fell to No. 1 and unbeaten Austin Anderson, 14-11, in the state title matchup.

Rockwall jumped out to a 2-0 lead in the opening 1:15 — goal each by Hailey Morgan and Emily Leal — before Anderson answered with four straight goals to take a lead it never relinquished.

Trailing 10-5 at halftime, Rockwall did manage to narrow the gap to 12-10 with 11:46 remaining; however, Anderson’s Jones Harper, a Dartmouth pledge, scored the last of her game-high six goals to seal the win for Anderson.

“We gave great effort,” said Rockwall Head Coach Gillian Goodsell. “We have great leaders on this team. The girls did all we asked of them, and I am so very proud of them.”

To view subscription options for The News and SportsDay, click here.

Rockford Scanner™: Good Samaritans Save A Pelican, On the Rock River