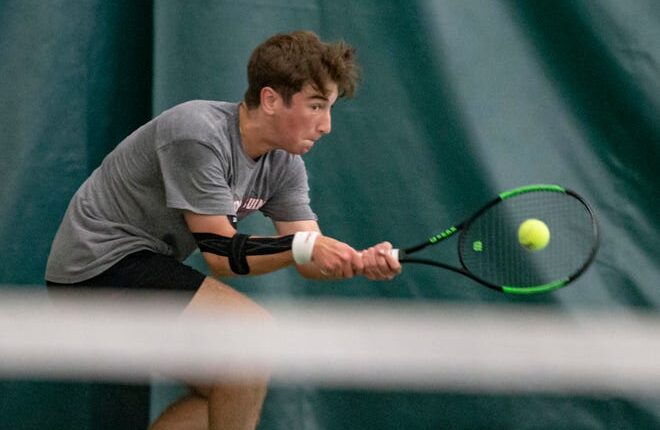 ROCKFORD — Auburn squeaked out another sectional tennis title — it’s eighth in five years, counting both boys and girls — while Rockford Christian cruised to only its second title in school history Saturday. No Rockford-area players reached state from the Rochelle Sectional.

Here is how area players reached state, their reactions and a breakdown on the six singles players and five doubles teams to qualify for the Class 1A and 2A Illinois High School Association boys tennis state finals next weekend in Chicagoland:

NIC-10:Auburn tennis streak rolls on, but this Belvidere North freshman was talk of meet

Buelte repeated as sectional champion, dropping only two games in eight sets. For Buelte, sectionals was more about the Royal Lions joining the 2018 team as the school’s only sectional champion and also qualifying a second singles player and its top doubles team.

“It’s great being a senior and having three out of four teams go down,” Buelte said. “It’s just an all-around great feeling.”

Buelte and Belvidere North’s Anderson Park, both in Class 1A, are the only area state singles medalists in the last 25 years. Buelte, undefeated this year, now hopes to become a two-time state medalist after taking sixth last year.

“I am obviously nervous, but I am excited too,” he said. “I am just going to have to show a lot of perseverance. Every opponent is going to be tough.”

Brinkmeyer lost only six games in six sets before losing 6-1, 6-1 to Buelte to finish second.

“It’s my first time to state as a sophomore,” Brinkmeyer said. “It’s exciting. I don’t know what to expect, but I’m excited. My serves helped me through most of my matches and kept me going.”

“He’s an all-around player,” Lutheran coach Nick Born said of his top player. “He’s got strong hits, strong serves, knows how to move and can play the volley when he needs to.”

McIlroy finished fourth at singles. Last year, he was part of a doubles team that took second.

“I got fourth individually, but my team held it down,” said McIlroy, one of four RC seniors who qualified for state. “That’s all that matters, that we got first.”

The two brothers were pushed by both Woodstock Marian teams, winning 7-5 in the second set in the first round and going to three sets in the finals before winning 6-2, 4-6, 6-1.

“We just stuck with it,” Spencer, a right-handed junior, said. “We never quit. We never got down on ourselves. We just picked each other up and pulled it out.”

“Doubles is a lot different,” he said. “It’s easier to stay positive because you have someone there to support you.”

Both partners are first-time state qualifiers.

“I’ve always wanted to qualify for state in something,” Ciembronowicz said. “To do it in tennis and help the team win the sectional title for only the second time in school history really means a lot.”

The Auburn junior didn’t lose a game until beating Guilford’s Joe Gesmer 6-1, 6-3 in a hard-hitting rematch of the NIC-10 finals that was closer than the score appeared.

“He was attacking a lot and hitting a lot of deep balls, heavy balls and some nice serves,” Kamaraj said.

Gesmer also hit a lot of hard balls with heavy topspin that just skimmed over the net. “Defending that was tough,” Kamaraj said. “He mostly got those points. I tried to hit it deep and heavy, near the baseline.

“I will need to be more consistent at state, keep it more deep. Attack more. And hit my serves better.”

The second set was only 4-3 before Kamaraj held serve on a marathon game. “That took a bit out of me,” said Gesmer, who lost shortly afterwards. “You are in it for so long and it was such a crucial game. He just played the long game in that game.”

Gesmer, a senior, said playing Kamaraj has prepared him for state but he needs to be more unpredictable next week.

“It can go either way with us; some points are over quickly because somebody is pounding the ball with their forehand, but sometimes it’s just playing the long point and trying to last as long as possible,” Gesmer said. “I have to strengthen my change of play, either being more aggressive or playing the long game.”

Kumar finished fourth to qualify for state for the first time as a senior.

“It’s great to represent the school,” Kumar said while icing his right shoulder. “I am definitely excited, but also nervous. I definitely need to be a little more consistent. And I hope the shoulder injury gets better. It got to me today, both with my serves and my forehands.”

The Auburn seniors won only one game in the finals against Huntley’s top team, but edged Hononegah 6-1, 3-6, 6-3 in the semifinals to take second.

“We were in most of the games, but we have to learn how to finish the points better,” Licari said. “We have to really pick it up at state and have fun.”

Ramaswami felt he gave Huntley too many chances to hit a put-away volley.

“I have to work on keeping it away from the net player, trying to draw him outside and then try to do down the line when they shift over,” he said.

Coach for all seasons:83-year-old has led eight sports in his quarter century at Lutheran

The Hononegah duo played two straight three-set matches, falling to Auburn but then beating Guilford 6-3, 2-6, 7-5 to take third. Broad won a lot of big points with aggressive forehands down the line. “It seemed to be working the whole match,” he said. “I figured I’d stick with what works.”

“What we struggled on was made really prominent on some of those points,” Kirwin said. “Knowing that is going to help us prepare for state. Serving for me was a struggle. And we need to keep getting our ground strokes in and staying consistent.”

The Guilford duo lost 6-2, 6-1 in the semifinals — but that was two more games than anyone else won off of Huntley’s champions. And the fourth-place team lost 7-5 in the third set to Hononegah in the third-place match.

“We really thought we could come back,” Lane said. “In the end, we just let it slip a little bit.”

“Our serving was really good,” Roberts said, “and our net presence and switching around was good. We just need to work on hitting our shots and being more accurate. We weren’t hitting our lobs correctly. We were feeding in front of them too much.”