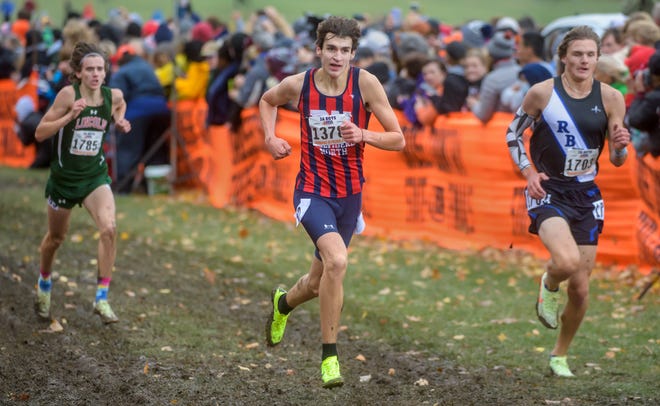 It was a rainy, windy and muddy day of state cross country races at Detweiller Park in Peoria on Saturday, but a pair of Rockford-area runners (Evan Horgan and Grace Erb) battled through it to place in the top 10 while one local squad (the Belvidere boys) hauled in a top-three team trophy.

North’s Horgan placed fourth in the Class 2A boys race in 15:26.93 to top all the local finishers, and to lead his team to the best finish for an area squad, finishing with a runner-up trophy in Class 2A. The Winnebago girls, who placed second at state last year and won it all in 2019, took fourth as a team, led by senior Erb’s sixth-place finish in 17:49.39.

“This was as tough a day to run in as you could find,” Winnebago coach Joe Erb said. “All of the runners had to work extra hard for this one. … Our girls were so tough. I’m just really proud of how they toughed it out.”

Here is how the locals fared in each class at the state races:

The Winnebago girls fell just one spot out of the trophy position by taking fourth place with 202 points, while Aurora Rosary took third with 198 and Chicago DePaul finished in second with 185. It was tight, but Winnebago didn’t have quite enough depth.

They were strong at the top, however.

“It’s just been amazing, and I’m really proud of how all of us handled it,” Grace Erb said. “And I was happy with my race. … We all wanted a trophy, sure, but this was a tough day, and this is the best we could do today.”

Marissa Roggensack placed 15th for Winnebago with a mark of 18:15.44, and Kaylee Woolery came in 45th in 19:05.70. But there was too big a gap after that, and Winnebago settled for fourth.

“We were pretty much prepared for anything, and it was crazy out there,” Roggensack said. “And while it didn’t end the way we wanted, I’m still proud as heck. We all are.”

Oregon’s Ella Dannhorn was the next best local female at 103rd.

“These were probably some of the worst conditions I’ve ever run in,” Sosnowski said. “We dug in. We found good spots to run. It was a really tough battle, but we just kept pushing and it turned out pretty well.”

Class 2A, 3A highlights

Orlando Hernandez came in the 26th after his North teammate Horgan, to spark the Blue Thunder in the 2A showdown. Boylan’s Alex Horton then came in at 34th. On the girls side, the best finish in 2A was from Belvidere’s Nina Fiore, who finished in 95th.

In the 3A races, Guilford’s Juan Del Real topped all the other locals by placing 58th at 15:50.34, followed way back by his teammate Landon Bachta, who took 107th.

The rain was falling much harder by the time the 3A races went off, and the course was very muddy and slick.

Jay Taft is a Rockford Register Star sports reporter. Email him at [email protected] and follow him on Twitter at @JayTaft. Sign up for the Rockford High School newsletter at rrstar.com. Jay has covered a wide variety of sports, from the Chicago Bears and Blackhawks to youth sports, for more than 20 years at the Register Star, and for nearly 30 years all together.