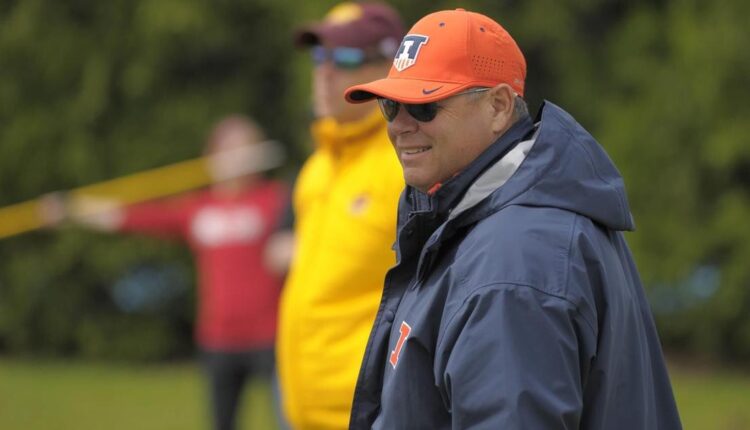 Illinois track and cross country coach Mike Turk. Turk was dismissed from his post on Wednesday per a department release.

Turk was hired as an assistant coaching throws in 2006 and has been the head men’s track coach since being announced as an interim in 2010. He was hired permanently in 2012 and became the head coach of both the men’s and women’s programs in 2017.

“I want to thank Coach Turk for his longtime service to the University of Illinois,” Whitman said in a news release. “Regrettably, following our Big Ten championship in 2015, competitive success in our men’s and women’s programs has been fleeting. With the programs now combined under a single coaching structure and with the recent opening of Demirjian Park, the time is right to usher in a new era for our proud running and field event programs. We wish Coach Turk all the best in his future endeavors.”

In January of 2020 he was named director of track and field and cross country. Illinois won a men’s outdoor Big Ten track title in 2015 and had five top-two finishes at conference championships from 2010-15. Since the coaching of the men’s and women’s teams became consolidated, Illinois has only one team finish in the top-eight of the Big Ten at an outdoor or indoor championships.

An Illini Guardians pamphlet advertising the collective’s subscription model. It includes meet and greets with members of the Illinois athletic department and Illinois gear.

Football coach Bret Bielema addresses a group of donors at an NIL fundraiser in Decatur.