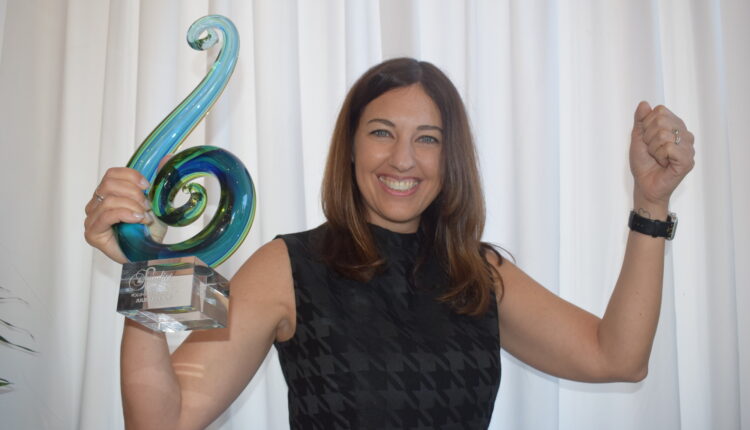 The Lakewood Ranch Business Alliance announced its Sandies’ winners in a special luncheon on Friday at The Ballroom at the Grove. The annual award program recognizes members — chosen by their peers — who have used their talent, character and commitment to give back to the Alliance and the community.

Fanning was a Sandies finalist for third time, this one in the Above and Beyond category. But when the award was announced as the first one on the program, it went to Nyda Bittmann Neville of TNB Consulting.

In eight of the 10 awards, all the finalists are announced. In the remaining two categories, the winner is a complete surprise. Ashlyn McCarty of Buffalo Lodging was the first surprise by taking down the Best Rancher award that is “awarded to the most dedicated and highly motivated member who has invited or referred the highest number of new Alliance members.”

Then it came to the final award, also considered the biggest.

Julie Fanning was selected as the Volunteer of the Year.

“I thought I had gotten off the hook,” Fanning told the packed room in The Ballroom about having to speak in front of a crowd after she lost Above and Beyond.

“When I decide to commit myself to something, I go ahead and dive right in,” Fanning said.

Fanning, the chair of the Alliance’s communication committee, likes dedicated herself to the Alliance because she said it supports both small and large business with great networking.

“It helps this community grow and prosper,” she said.

Erik Hanson, the Alliance’s incoming board chair, said Fanning has taken the communications committee to a “brand new level” and also noted she just “has the best smile and personality.”

Among the other winners was Brian Garnant, the program management and event coordinator for the Florida Cancer Specialists Foundation. He moved to the area last October from Peoria, Illinois and immediately joined the Lakewood Ranch Business Alliance to help him connect with his new community.

As the winner of the Rising Star award, that connection obviously worked.

“I didn’t know anyone here,” Garnant, who works with Kristie Teal to plan the foundation’s major fundraisers.

“Boy, this is a great organization,” he said of the Alliance. “It was fortunate that I plugged into them or I wouldn’t have been able to learn about this community. It got me connected.”

Join the Neighborhood! Our 100% local content helps strengthen our communities by delivering news and information that is relevant to our readers. Support independent local journalism by joining the Observer’s new membership program — The Newsies — a group of like-minded community citizens, like you. .