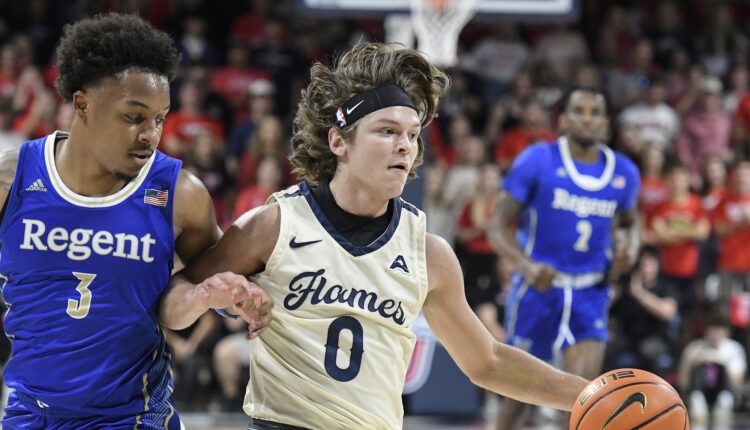 The Liberty Flames have utilized the services of a couple of true freshmen this season to help push the team to remaining at the top of the ASUN Conference. Led by starting point guard Colin Porter, this class should continue to make an impact on the men’s basketball program as it moves towards a tenure in the Conference USA.

As we’re roughly halfway through the conference portion of the season, let’s take a look at the freshmen’s progress through so far.

Porter may be one of the biggest reasons for Liberty taking a step forward this year. Last season’s team was unable to find a true point guard to compliment the skill and talent of Darius McGhee. The Flames tried Drake Dobbs and DJ Moore, neither of which panned out and ultimately entered the transfer portal.

Enter porter, a 5’9″ guard from Ashland, Kentucky. Yes, he was reclassified during his junior year of high school to enroll early, but that put him back on schedule with his original graduation class. Still, the poise and skill he has provided to the team as a true freshman has been superb.

Porter has started all 21 games, averaging 25.6 minutes each game. He’s shooting 43.1% from three and his 31 made triples are the fourth most on the team behind McGhee, Brody Peebles, and Kyle Rode. He also leads the team with 87 assists to only l36 turnovers and is second on the team with 28 steals. Porter is currently averaging 6.5 points per game.

McKay’s take – “He brings a stability to our group on both ends. He doesn’t get the credit that he deserves for how sound he is defensively. He’s got a commitment on that end that is unlike most freshmen. I love him. I trust him. I think he’s got a chance to be one of the best ever in our program. To me, he’s as good as any point guarded out there as a freshman.”

Cleveland has played in 16 of the team’s 21 games, averaging 15.9 minutes each outing. He’s shooting 44.7% from the field and has missed his six three point attempts. Cleveland is averaging 3.8 points and 3.3 rebounds per game. He’s also second on the team to Shiloh Robinson with 10 blocks and has shown his ability to make plays with the ball in his hands as he has 35 assists.

The 6’7″, 210 pound forward from Bloomington, Illinois, Cleveland has shown flashes of his potential to make a big impact on the team. His athletic ability has led to several times he nearly broke the rim off the backboard with thunderous dunks.

Cleveland has missed the past four games, having not played since the team’s loss at Eastern Kentucky. Coach McKay had indicated prior to the home game against North Alabama on Jan. 12 that he was to miss the game due to a non-COVID related illness. Cleveland made the trip with the team to Jacksonville this past weekend, but did not see any game action as he was on the bench in street clothes.

McKay’s take from earlier in season – “We’ve seen flashes of (him being really good) throughout the fall and even some in the early season. Between he and freshmen comrade Colin Porter and Ben Southerland, he’s going to be a really good player for us too. I really like the youth that we have in our program.”

The 6’9″ forward from Virginia Beach, Spell redshirted last year and has yet to crack into the normal rotation this season. He has seen playing time in 17 of the team’s 21 games, averaging 4.1 minutes per contest. 18 of his 19 attempted field goal attempts have come from three-point range. He has made 4 of 18 triples for 22.2% this season.

Southerland was likely the highest rated signee of the class coming out of high school. The 6’7″, 190 pound forward out of Ohio is currently redshirting. He has the ability to make an impact on this team moving forward, especially once forwards Kyle Rode and Shiloh Robinson exhaust their eligibility. Southerland’s biggest strength is likely his ability to stretch the floor and shoot from the perimeter.

The 6’3″, 195 pound guard is a walk-on from Arlington, Texas who is currently redshirting.

A conversation with the Rockford Symphony Orchestra’s new music director