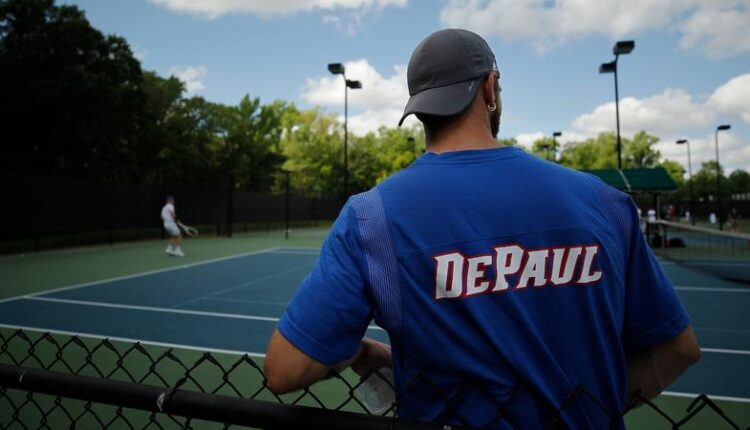 The Blue Demons will be participating in the weekend-long Milwaukee Tennis Classic while also playing in the two-day-long River Forest Invitational, both starting on September 16th.

The following week, on September 26th, DePaul will make an appearance at the UTSA Futures tournament in Albuquerque, New Mexico and then travel to another week-long UTSA Futures contest in Ithaca, NY starting on October 3rd.

Members of the team will head out to Des Moines, Iowa for the Drake Invitational, October 7th through October 3rd, while other squad members take on the competition at the Redbird Invitational in Normal, Illinois.

To close out October matchups, the “Band of Brothers” will travel to Notre Dame, Indiana for the Notre Dame Invitational on October 28th.

On January 13th, DePaul heads back to Indiana to start the spring dual season, versus the Fighting Irish and IUPUI in South Bend.

On January 20th and 21st the Blue Demons face off against Wisconsin and Princeton on the road in Madison.

The Blue Demons hit the road again for a match against Purdue in West Lafayette, Indiana on February 3rd. The following weekend, DePaul has three consecutive matches against Drake, Creighton, and University of Nebraska at Omaha starting on February 10th.

On February 17th and 18th, DePaul will participate in the HEB Tournament of Champions taking place in Corpus Christi, Texas before continuing regular season play.

DePaul will host the rest of their matches in February, starting with Eastern Kentucky on the 24th and finishing off with both Cleveland State and Army on the 25th.

On March 3rd, the Blue Demons take on fellow BIG EAST member Marquette in Milwaukee, Wisconsin. The following weekend DePaul travels to Wilmington, North Carolina for another three-match series starting on March 17th with a match versus North Carolina Wilmington before facing Illinois State on the 18th and closing out the weekend against Bryant on Sunday.

After that, the Blue Demons will hit the road for 2 conference matches facing off against Butler on the 25th and Xavier on the 26th.

For their last two road matches of the regular season, DePaul travels to Richmond, Virginia on March 31st for a contest against VCU and then on to Washington DC to play Georgetown for its penultimate conference match.

DePaul will host their last dual match of the 2023 campaign against the Villanova Wildcats at the XS Tennis Village on April 7th.

The BIG EAST is set to host the 2023 championship beginning on April 21st in Cayce, South Carolina with the first round of the NCAA Championship commencing on May 5th.