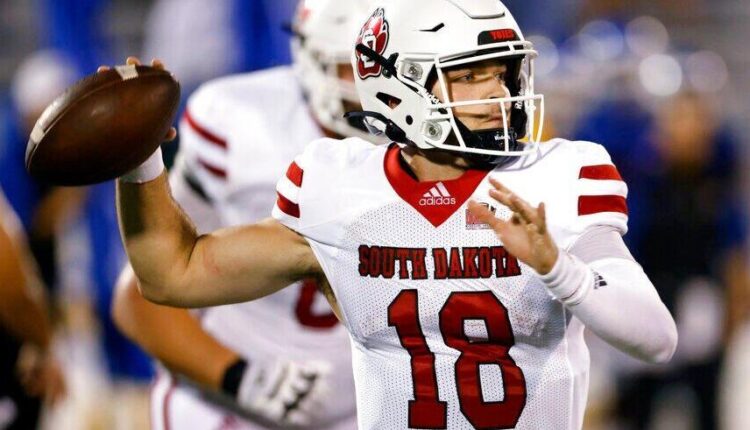 Here are the key Coyotes players to watch:

The 6-foot-3, 210-pound sophomore quarterback from Bloomington, Illinois, already has 17 starts under his belt. Camp is in his third year as a starter going back to the 2021 spring season, when he made the MVFC all-newcomer team as USD’s first-ever true freshman QB to start a season opener. He passed for 2,252 yards, 17 touchdowns and seven interceptions last fall while ranking 11th in the FCS in completion percentage and 14th in pass efficiency. Camp was 18-of-34 passing for 139 yards and one interception last week in a 34-0 loss to FBS Kansas State.

Running back: Travis Theis, No. 5

The 5-foot-11, 205-pound sophomore running back from Pratt, Kansas, earned All-MVFC honorable mention status last season. Theis ranked seventh among MVFC players with 61.5 rushing yards per game. His eight rushing scores led USD and were tied for eight in the MVFC. Theis was the 2018 Kansas high school all-class offensive player of the year. He rushed 11 times for 56 yards last week. Shomari Lawrence ran 14 times for 84 yards in his return from injury. USD’s leading rusher in the final four games last year, Nate Thomas, will miss the year with an injury.

The 5-foot-10, 175-pound sophomore wide receiver from Bettendorf, Iowa, has been all over the field in his still-young college career. Bell earned preseason first-team all-conference honors as an all-purpose back and second-team recognition as a receiver entering this season. Last year, he picked up all-league honorable mention status after he led the team with 41 catches for 673 yards and five touchdowns. He ranked ninth in the MVFC with 56.1 receiving yards per game. Bell caught two passes for 18 yards last week as USD had nine players combine for 18 receptions.

The 6-foot-7, 290-pound senior offensive lineman from Plymouth, Minnesota, is again holding down left tackle for a line that returns four of five starters. Jensen is a Stats Perform preseason second-team All-American, got preseason second-team All-America honors from Hero Sports and was a preseason first-team All-MVFC selection this fall. He earned second-team All-MVFC honors in the fall 2021 season and had been all-conference honorable mention in the spring 2021 season. He’s started in 29 consecutive games at left tackle dating back to the 2019 season.

The 6-foot-4, 270-pound sophomore defensive lineman from Alta, Iowa, impressed in his first full college season last fall. Gaes comes into this year as a preseason second-team all-league honoree after he made the Hero Sports FCS freshman All-America team, was chosen for the MVFC all-newcomer team and finished third in voting for the conference freshman of the year last case. He totaled 10 tackles for loss last season and led all MVFC players with seven solo sacks in league play. He finished with 35 tackles to rank sixth on USD. He had three tackles last week.

The 6-foot-2, 230-pound junior linebacker from Farmington, Minnesota, takes over leadership of a linebacking group that had two players sign with NFL teams in the spring. Mogensen was given Hero Sports preseason third-team All-America honors and preseason first-team all-conference recognition this fall. Last year, he ranked eighth in the MVFC with 7.2 tackles per game, while his 86 total tackles ranked second on USD. Last week, he had a game-high 12 tackles against Kansas State, while Akron transfer LB Michael Scott was second with eight stops.

The 5-foot-10, 190-pound sophomore cornerback from Miami Gardens, Florida, is back from an injury that limited him to the first six games last season. Harden had been coming off a stellar spring 2021 season in which he made the Hero Sports FCS freshman All-America Team, earned All-MVFC honorable mention status and landed on the MVFC all-newcomer team. He led the FCS in passes defended per game that spring season. In his return last week, Harden tallied five tackles, all solo stops, including two tackles for loss and one sack, to go with one forced fumble.

The 6-foot, 200-pound junior from Fort Lauderdale, Florida, made a splash in the kickoff return game. Eliodor was All-MVFC honorable mention as a return specialist last season, when he ranked 10th in the FCS and second in the MVFC by averaging 28.7 yards over 18 kick returns. He had a 99-yard kick return TD against Missouri State, which made him the first USD player to return a kick for a score since 2008. Carter Bell ran back 14 punts for 132 yards and a TD last season. USD is replacing it kicker and punter but has back its All-American long snapper.