New Rockford movie theater roof caves in; no one hurt 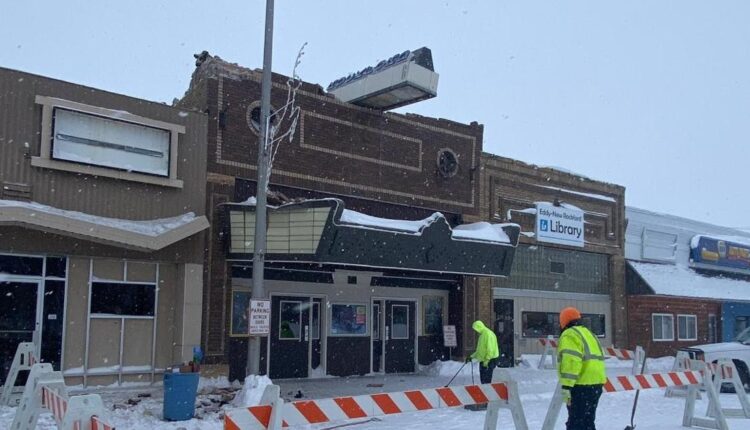 The roof of the Rockford Theater in New Rockford collapsed early Monday, apparently from the weight of snow.

There were no injuries in the incident in the small Eddy County community about 140 miles northeast of Bismarck.

The community-owned movie theater is in New Rockford’s downtown.

“It’s just been around for what seems like forever,” said Sydney Ulrich, daughter of theater manager Glenda Collier.

Weight of snow on the roof is the suspected cause of the auditorium caving in. It’s been a snowy start to the season in North Dakota, and nearly 11 inches of snow fell in New Rockford during last week’s blizzard, according to the National Weather Service.

The theater opened in 1920 as the Blackstone Theatre. It converted to digital projection and sound in 2012. It was renovated two years ago, with new chairs, flooring and walls.

The theater will consider estimates for repairs or a new building, and look for grant money. The North Dakota Film Society has launched a GoFundMe page to help the theater. It had raised more than $3,000 as of late Monday afternoon.

The theater is closed indefinitely, and officials cautioned residents in a Facebook statement to stay outside barricades “as the building structure is unstable and more bricks could fall.”

“We are hopeful and full of motivation to open again at some point,” the statement added.

Exclusive: Breeda Wool opens up about her career and upcoming roles