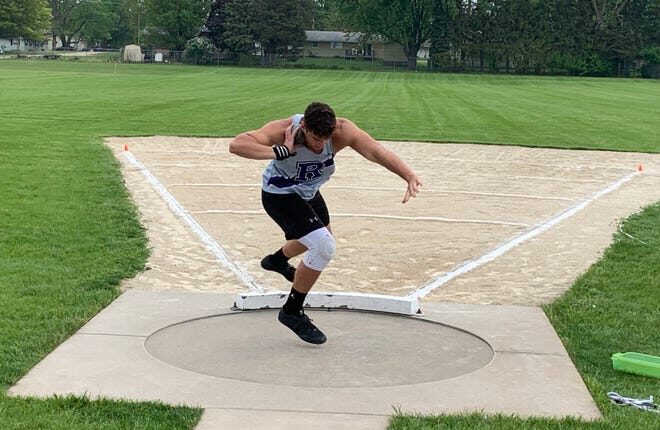 Some of the top area throwers stepped up and strutted their stuff at sectionals early in the week, advancing to the Illinois High School Association state finals and setting the stage for a big finish to the boys track and field season.

Harlem’s Riley Lundgren, who headed into the postseason with the third-best discus throw in all of Class 3A this season and the 18th-best shot put of the year, continued on his torrid pace Wednesday during the 3A Huntley Sectional. He advanced to state in both the discus and the shot put, showing the rest of the way.

Along with the rest of the standouts from the area who finished either first or second in their events, or eclipsed the state standards, they will now get set for the boys state track and field meet in Charleston from May 26-28.

One of those, Sanford, tore the ACL in his knee one year and one week ago from the day he advanced to state.

“It was such a weight off my shoulders to get through to state,” said Sanford, who placed fifth at sectionals on Wednesday, but his throw of 48 feet, 5 1/2 inches was just good enough to get him down to state on distance. “After all that, a year and a week later I’m back here qualifying for state in the shot put. … And there’s a lot more room in the tank for state now, too.”

The throwers weren’t alone, and led by sophomore Nico Bertolino, Belvidere North advanced out of the 3A Huntley Sectional in seven individual events and a relay on Wednesday as well. For Freeport, it was just hurdler Bayley Pierce who made it out of the 2A Rochelle Sectional, but he made it in both of his events.

“It feels incredible. Now I can go home and sleep,” said Pierce, who took second in both the 110 highs and the 300 intermediates. “I was dying, but I knew I had to fight through it, I knew I had to battle through it all and go get it.”

Here is a look at all the state qualifiers from the area:

This story will be updated after the rest of the area teams complete their sectional track and field meets.

The Private Sector Steps In to Protect Online Health Privacy, but Critics Say It Can’t Be Trusted