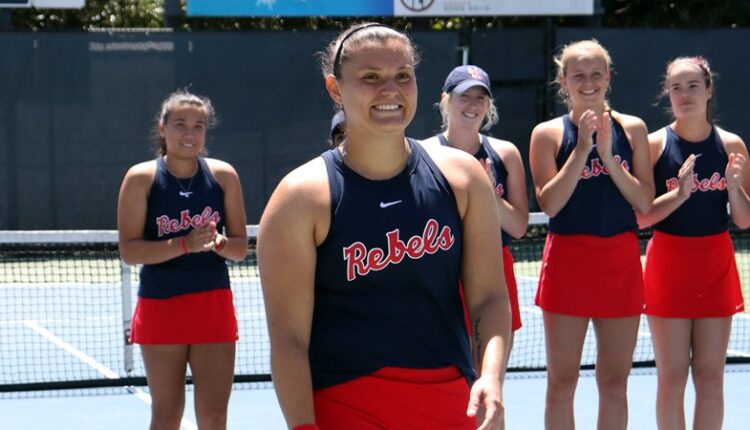 TEMPE, Ariz. – Ole Miss Women’s Tennis (13-11, 5-8 SEC) remained No. 50 in the ITA Tennis Rankings sponsored by Tennis-Point on Wednesday. Sabina Machalova moved up two positions to No. 42 in singles and fell back one to No. 88 in doubles alongside Rachel Krzyzak.

Wednesday’s Collegiate Tennis Rankings sponsored by Tennis-Point are the final ITA rankings released prior to the NCAA Team Championships. The ultimate team rankings for the 2022 season will be released on May 25, followed by the final singles and doubles rankings on June 2.

The Rebels team season came to a close at the SEC Championships in Gainesville, FL. The Rebels ended the 2021 spring season with a 13-11 overall record. The 13 victories are the most by the program since 2018 (22). The Rebels didn’t make the NCAA Team Championships this season.

Ole Miss is one of nine SEC teams to rank in the ITA top-50 in the May 4 updated rankings.

Machalova jumped up the rankings from No. 44 to No. 42 this week without competing in any matches. The senior has earned a 22-12 overall record this season and was voted to the All-SEC First Team. Yesterday, she earned an at-large entry into the NCAA Singles Championships starting with the round of 64 on May 23 in Champaign-Urbana, Illinois. Machalova earned her second consecutive at-large placement into the pinnacle individual event of the spring tennis season.

The full women’s ITA Rankings can be found here:
https://www.wearecollegetennis.com/2022/05/04/di-womens-rankings-for-may-4/