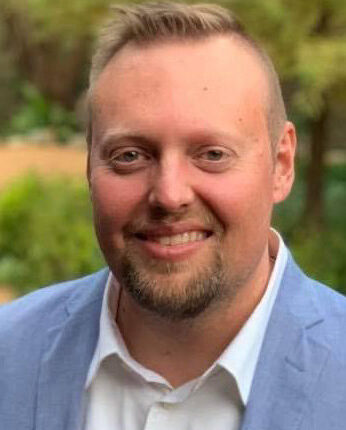 Russell Adam Buckingham “Russell Rush”, passed away on Friday, October 21, 2022, at his home in San Antonio, Texas surrounded by his family and close friends.

He was born on August 4, 1978, in Fort Madison, Iowa the son of Lyle and Rosemary (Funck) Buckingham. Russell’s love of people and compassion for others was apparent at an early age, and he always gravitated towards the spotlight whether it be to grab his guitar to organize cousin sing-a-longs, or to perform in a local production of “The Music Man ” at the age of nine. He attended the Aquinas Catholic School system in Fort Madison, Iowa graduating in 1996. He then went on to complete his bachelor’s degree at St. Ambrose University, majoring in Communications with a minor in Music and Marketing.

Russell’s passion for radio began as a young child pretending to do radio spots in the backyard. At sixteen years old he first flooded the airwaves at KBKB-FM Radio as DJ Colin Black, and over the course of his young lifetime worked at several radio stations in cities across the country including All Hit 98.9 out of Davenport, Iowa, 101.5 WBNQ in Bloomington, Illinois, and WQEN in Birmingham, Alabama.

In 2005 he transferred to San Antonio, Texas where he became the afternoon drive on-air personality and later became the program director for iHeart Media’s KXXM-FM Mix 96.1 NOW. Russell fell in love with the city of San Antonio and was a well-known and respected member of the broadcast community. In 2008 the San Antonio Media Alliance named him “Radio Personality of the Year” and his work has been featured on radio and TV stations across the country. He wrote and produced “The Russell Rush Haunted Tour,” a paranormal investigation show which won several Lone Star EMMY & Telly Awards.

His passion, however, didn’t stop at the microphone. He was a powerful voice and strong advocate for several nonprofit organizations participating in events for Susan G. Komen, Make-A-Wish, Kidd’s Kids, SA Rodeo, Fiesta San Antonio, Elf Louise Radioathon, Toys for Tots, College Signing Day, and organizer of the annual Roofsit for SIDS (Sudden Infant Death Syndrome) to promote safe sleep patterns for infants in honor of his niece Caroline who passed away from SIDS in 2002. He also helped raise money for the Uvalde, Texas school shooting victims and hosted a public affairs radio show that brought awareness to several community activities. He was an advocate for education and worked with many local school districts.

On November 14, 2020 he married the love of his life, Saralyn Ferrell, in Dripping Springs, Texas, who survives with their two dachshunds: Hayden Waffle Fry and Leia June.

Russell was welcomed to heaven by his grandparents: Robert and Cecilia Buckingham (formerly of West Point, Iowa); his grandfather: Robert Funck (formerly of Fort Madison, Iowa); his niece Caroline, and his dog: Barrett.

A graveside service will be held at 11:00 am on Saturday, October 29, 2022, at Calvary Cemetery in West Point, Iowa, with Father Joseph Phung officiating.

A large scale memorial service will be held at Tech Port Center and Arena in San Antonia, Texas, Sunday, November 13, 2022. Open to the public, family, friends, fans and anyone touched by Russell are encouraged to come.

A permanent sight to memorialize Russell has been established at www.russellrush.com/wp.

A memorial has been established in his memory and can be mailed to the family at: Schmitz Funeral Home, PO Box 22, West Point, Iowa 52656.

Schmitz Funeral Home of West Point is assisting the family with arrangements. Online condolences may be made to the family at www.schmitzfuneralhomes.com.