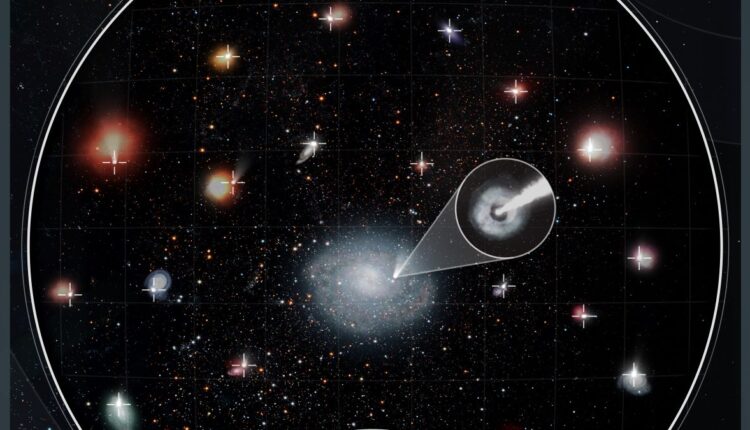 Billions of light years away from Earth, occasionally galaxies may have mysterious, powerful, short-lived outbursts. They’re called short gamma ray bursts (SGRBs), and a team of astronomers have just released the most extensive inventory to date of where they originate.

“This is the largest catalog of SGRB host galaxies to ever exist, so we expect it to be the gold standard for many years to come,” said Anya Nugent, a Northwestern University, Illinois astronomer.

“Building this catalog and finally having enough host galaxies to see patterns and draw significant conclusions is exactly what the field needed to push our understanding of these fantastic events and what happens to stars after they die.”

The research has been published in two papers in The Astrophysical Journal.

SGRB are created when two neutron stars collide. They generate flashes of intense gamma ray light that last less than two seconds but can travel billions of light years. Some gamma ray bursts will eject more energy in 10 seconds than the Sun will emit in its 10-billion-year lifetime.

While the gamma rays last mere seconds, the optical light can sometimes continue for hours before fading below detection levels. This is called an afterglow, and it helps astronomers track the SGRB back to a galaxy or other source. SGRBs having an afterglow is relatively rare, with, at most, a dozen detected and pinpointed each year.

NASA’s Swift Observatory first discovered an SGRB afterglow in 2005, and since then researchers have been trying to understand why only some galaxies produce these outbursts. At this stage only one SGRB (GRB 170817A) has a confirmed neutron-star merger origin — as it was detected just seconds after gravitational wave detectors observed the binary neutron-star merger (GW170817).

Get an update of science stories delivered straight to your inbox.

Because these gamma rays currently represent the only way to study a large population of merging neutron star systems, having a catalog of what scientists already know is extremely helpful.

Using several highly sensitive instruments and sophisticated galaxy modelling, the researchers pinpointed the galactic homes of 84 SGRBs and probed the characteristics of 69 of the identified host galaxies. Among their findings, they discovered that about 85% of the studied SGRBs come from young, actively star-forming galaxies.

“In a decade, the next generation of gravitational wave observatories will be able to detect neutron star mergers out to the same distances as we do SGRBs today,” said one of the researchers, Northwestern University astronomer Assistant Professor Wen-fai Fong.

“Thus, our catalog will serve as a benchmark for comparison to future detections of neutron star mergers.”

The astronomers found that more SGRBs occurred at earlier times, when the universe was much younger (and with greater distances from their host galaxies’ centres) than was previously known.

Also, several SGRBs were spotted far outside their host galaxies. This is very surprising, like they were ‘kicked out,’ and raises questions as to how they were able to travel so far.

“The catalog can really make impacts beyond just a single class of transients like SGRBs,” said Northwestern astrophysicist Yuxin ‘Vic’ Dong. “With the wealth of data and results presented in the catalogue, I believe a variety of research projects will make use of it, maybe even in ways we have yet not thought of.”