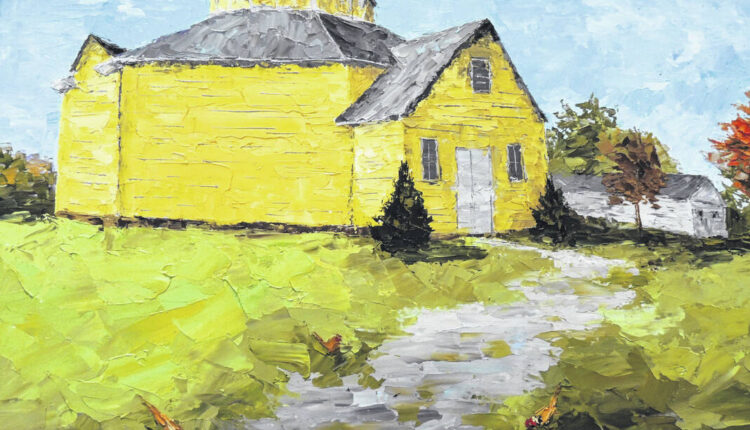 SIDNEY — Robert Kroeger, of Cincinnati, created 17 Shelby County barn paintings to raise awareness for historic barn preservation in November 2021. He then donated them to the County Wide Historical Alliance as a fundraising opportunity. A 2023 calendar and note cards were created with the images of the paintings.

The Alliance has announced the paintings will be going up for auction online during the month of July.

Diamonds are valuable gems, a good analogy for this superb octagonal barn on the fairgrounds of Shelby County. Round barns, a category that includes true circular and polygonal shapes, are extremely rare and represent a fad of barn building that didn’t last and comprised less than one percent of barns built in that era – from 1875 to about 1930. In Ohio there are only about two dozen remaining.

Though there were a handful of round barns built before 1875, the shape didn’t interest the average farmer, even though the country’s first president, farmer George Washington, built a 16-sided threshing barn in 1793 and the Shakers of western Massachusetts built a true round barn of stone in 1826. Oddly enough, another round barn, this one of orange brick, was built in 1860 in Champaign County. None followed its lead. Farmers figured that rectangular barns were easier and less expensive to build, compared to round ones. They were right. The shape just didn’t catch on.

Then, in 1875, after losing three conventional barns to fire, New York State’s Eliot Stewart built an octagonal barn, which he figured would survive. As the editor of the Buffalo Livestock Journal from 1872 to 1876, he was influential in the agricultural community and by 1884 he claimed there were 30-40 octagonals, mostly in New York but also as far away as Mississippi. However, they still remained less than one percent of all barns built.

The next phase was the circular barn, popularized by Wisconsin’s Professor Franklin King, who built one for his brother in 1890 and published it in many ag journals. This shape did catch on … for about 30 years and was geared for the dairy farmer, who could gather his cows around a central silo, also introduced by King. Still, the average farmer chose the traditional barn and ignored the “self-supporting” roof of the rounds, which proponents claimed to be wind resistant. They weren’t.

Today the plaque over the barn’s entrance reads, “Community Hall, Community Foundation of Shelby County.” Though it’s still being used, there are rumors of its demise. Now, if you had a diamond ring, you would surely be cautious around a drain, being careful not to let it slip off and then down the drain. Likewise, Shelby County should take great care to preserve this octagonal gem, one of the few of its kind left in Ohio. Indeed, it’s one of the county’s true diamonds.

The paintings have been on display at various community festivals and will be displayed at the Shelby County Fair at the end of July. The paintings will be located in the Bicentennial Traveling Museum that will be parked next to the Community Foundation Hall. The calendars and sets of 14 note cards will be available for sale for $15 each.

Each painting will be listed by lot number with a description. Opening bids will start at $50 and each subsequent bid will go up by $5. Bids can be made at TroyKies.hibid.com. There will be a total of 19 paintings auctioned off.

The auction will end on Friday, July 29, at 6:30 p.m. The winners of the bids are to pick up their paintings on Saturday, July 30, between 1 and 3 p.m. at the Traveling Museum inside the Shelby County Fairgrounds or arrange a pickup at a future time with the Shelby County Historical Society.