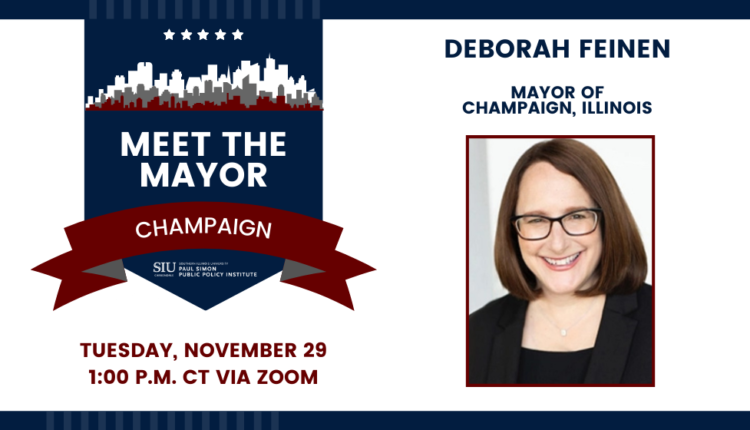 Feinen will join John Shaw, institute director, for a virtual discussion at 1 pm, Tuesday, Nov. 29. They will discuss Feinen’s career in both the public and private sectors, her tenure as Champaign’s mayor and her vision for her community.

“Mayor Feinen has had a remarkably wide-ranging and interesting career, built around a deep passion for making Champaign better. We are eager to learn how Champaign has evolved during the 45 years that she has lived in her community and also understand the mayor’s aspirations for Champaign,” Shaw said.

Feinen is in her second term as Champaign’s mayor. She was appointed to the Champaign City Council as an at-large member in 2006 and re-elected twice before being elected mayor in 2015 and winning re-election in 2019. Prior to that, Feinen served on the Champaign County Board for 14 years.

Feinen earned a bachelor’s degree in psychology and education from Mount Holyoke College and a law degree from IIT-Chicago Kent College of Law. As an attorney, she has worked for the Illinois Pollution Control Board, the Illinois State Board of Education, Nally, Bauer, Feinen & Mann, PC, and Tummelson, Bryan, & Knox, LLP. She is vice president for downstate operations at Attorneys’ Title Guaranty Fund, Inc.

The event is free and open to the public; registration is required at paulsimoninstitute.org/events. Attendees are encouraged to submit questions for Feinen on their registration form or email them to [email protected]

Meet the Mayor is a series of virtual conversations in which the institute hosts interviews with Illinois’ municipal leaders and discuss the challenges and opportunities they face.

Detonation by Design: The Inevitability of Tony Khan’s ‘Dynamite’