Smith sisters “set” up for success – The Daily Eastern News 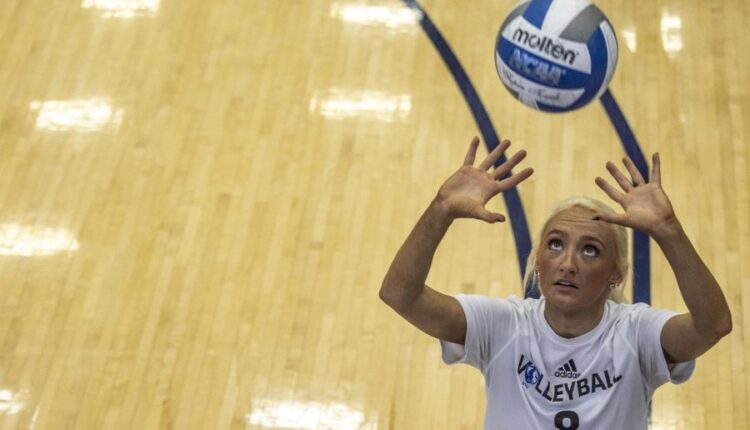 I-57 North is a highway that is anything but unfamiliar to Summerlyn Smith.

For two years, the senior setter for the Eastern volleyball team took the highway north to Champaign, Ill., to the birthplace of her collegiate volleyball career; Parkland College.

“It’s mainly just a straight shot and it’s all pretty much cornfields until you hit Champaign,” Summerlyn said.

Being a Cobra for two years allowed Smith to get a taste of what being on a championship team was like as the Cobras captured Mid-West Athletic Conference titles and played in two straight NJCAA Division II National Championships.

“It was one of the best experiences of my life, but I think it just made me hungry, to kind of want more,” Summerlyn said. “That’s why I chose to come to Eastern because it was super close to home, and I know that they needed a jumpstart, like a kind of a push. I wanted to be that person to come in and start a fire here.”

Smith did not leave her hometown of Mattoon, Ill., in her review mirror for long as her success as a Cobra and her hunger for more competition led her to following those same cornfields back home because two years later, Smith committed to the Panther volleyball program.

Smith first laced up her volleyball shoes as a Panther during the 2021 season during which she recorded 785 assists, including an astounding 121 at the Saluki Invitational where she also had 22 digs in three matches.

This season, Smith has more than 300 assists that includes a season-high of 22 against UT Martin earlier this season when the Panthers and the Skyhawks battled it out for first place in the OVC.

Her success at both the NJCAA Division II and NCAA Division I levels was not unprecedented. When Smith steps on the court at Lantz Arena, she is filling the proverbial steps left on the court by her older sister and former EIU All Conference player, Taylor Smith.

Taylor was a setter for the Panther volleyball program from 2015-2018. During those four years, Summerlyn was able to sit in the stands and watch her sister play, which only made her admiration for her older sister grow.

“She was definitely one of my role models, and I always looked up to her,” Summerlyn said. “I know that she left it all out on the court every time she played so I just always admired that and wanted to be more like her.

The sisters have been able to regularly watch each other play.

“It was so nice getting to play in front of my hometown friends and family,” Taylor said. “I think my sister would agree that it’s comforting to be able to look into the stands and see your family members there cheering you on.”

Although Summerlyn and Taylor have had their own individual and successful volleyball careers as setters, there are still times when comparisons are made.

However, Summerlyn said that in some ways, it’s one of the best things about having an athletic older sibling that has done the same sport and position as her.

“I would say the comparisons are kind of the hardest part but honestly, at the same time, it’s kind of a good thing just because people know like, hey, you come from a good family, my sister is a hard worker,” Summerlyn said. “So, they’re like, okay, she’s probably going to be similar to that.”

Taylor said that people often ask her and Summerlyn who the better volleyball player is, and they always say themselves.

‘We are too competitive to say the other person,’ Taylor said. “Also, as we’ve gotten older, we also have grown to look a lot alike. We’ve gotten asked if we are twins more times than I can count.”

Aside from their dad attending Eastern, both Summerlyn and Taylor have a huge tie to the Panther Volleyball program; coach Sara Thomas.

Thomas was hired as the head coach in December of 2019, just shortly after Taylor ended her athletic career as a Panther. However, it was the interviewing process that hired Thomas as head coach that would bring the Smith sisters and the Panther volleyball program even closer.

“Well, it was kind of funny because her sister is an alumnus from here and Taylor was a part of the interview process when I was going through it and so I really got to know Taylor,” Thomas said. “Then, as we started recruiting, Taylor is like ‘oh yeah, my sister is a setter as well at Parkland.’ So, then once we saw her, we were like oh, yeah, we need her.”

Taylor knew that her sister would be left in good hands once she committed to the Panther volleyball program.

Summerlyn played her last home match as a Panther last Wednesday other but she will be chasing the OVC Tournament title later this week.

Taylor left everything she had on the court when she played and now, it is Summerlyn’s turn to do the same.

“I just hope the good culture continues,” Summerlyn said. “I feel like we’ve built, especially this season, a great culture between all the players on and off the court. So, I just hope that kind of stays and people are driven to win and want the title of OVC Champions.”

Taylor said that there are two things that Summerlyn has always excelled at; volleyball and athletics. With two volleyball careers under her belt as both a Cobra and a Panther, Summerlyn will graduate knowing that her sister will always remain joyful.

“She’s truly my best friend and watching her exceed her goals has just been amazing to watch,” Taylor said. “I’m so proud of her.”