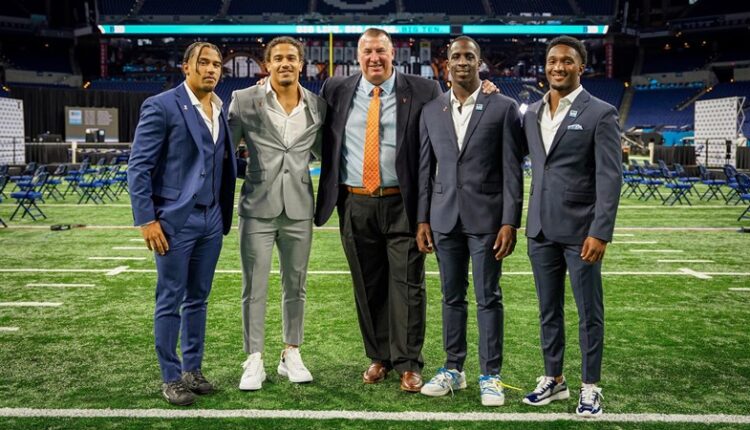 INDIANAPOLIS — Bret Bielema’s second Big Ten Media Days appearance since taking over as head coach at Illinois in December 2020 is in the books. Bielema and Illini student-athletes attended the second day of the two-day event alongside six other conference teams, with senior defensive backs Sydney Brown and Jartavius ​​Martin, junior running back Chase Brown, and sophomore wide receiver Isaiah Williams all representing Illinois in Indianapolis.

Following a 5-7 season in Bielema and company’s first year in Champaign, the Illini head coach focused on several key topics during his press conference and television appearance, including the defense’s improvement under defensive coordinator Ryan Walters, the change in offensive coordinator with new OC Barry Lunney Jr., the vibes inside the Smith Center and more.

With training camp starting on Saturday and the season opener against Wyoming one month away, let’s take a look at five key takeaways from Big Ten Media Days.

After the Illini lost to the Virginia Cavaliers in Charlottesville on Sept. 11, the defensive unit flipped a switch. Illinois allowed 20 points or fewer in seven of the final nine games and established itself as one of the best defenses in the conference.

The Illini ranked 14th in the Big Ten in points allowed in 2020, giving up just under 35 points per game in the COVID-19 shortened season. In Walters’ first campaign in Champaign, Illinois finished fourth in the conference in points conceded per game at 18.9 points per game.

“Without a doubt, the thing that Ryan has is a complete confidence, like he’s a very confident person,” Bielema said. “He has a great way of rapport with our players, and … I think our guys basically recognize the competitiveness of him.”

Though Joseph is no longer with the team after being selected by the Detroit Lions in the third round of the 2022 NFL Draft, Martin and Sydney Brown will continue to bring their production and experience to the Illini secondary this season.

“Yeah, (Coach Walters) made a big impact in that,” Sydney Brown said. “I’d say a real turning point and a mark point that we can make what you look at the Virginia game after we played. I mean, that was a game that we faced a lot of adversity. And it was guys like Kerby that came in and stepped in and played a big role.

“So I mean, revolving off that game and making the improvements, you know, continue on this season and have some success we did later down the road was a big, big turning point.”

It’s no secret that the key to any dominant run game is a strong, reliable offensive line. Illinois boasted one of the most experienced units in the country last season, and despite losing Doug Kramer, Vederian Lowe, and Jack Badovinac, Bielema and the Illini still feel confident in its offensive line heading into the season.

That starts with the return of senior Alex Palczewski, who already has 52 career starts under his belt. Bielema knows his veteran experience will be pivotal, especially early on in the season as the rest of the o-line develops and meshes.

“The players that we have coming back from last year’s roster start with Palcho,” Bielema said. “He looks incredible. He’s kind of redefined his weight. We’ve had an entire year to work with him. If he continues to be what we think he’ll be, he’ll leave college football with the most career starts in the history of the game. He’s played a lot of really good games at guard and tackle. His leadership has been unwavering since we got together in January again.”

Senior Alex Pihlstrom and junior Julian Pearl are two other key returners from last year’s squad. Pihlstrom appeared in all 12 games last season, including five starts, and has experience as both a tackle and a guard, while Pearl also played in all 12 games while making 10 starts.

Bielema says he plans for Pihlstrom to play at center, while the additions of Isaiah Adams and Zy Crisler, who both have experience at the community college level, and the return of Jordyn Slaughter, who missed the 2021 season with an injury, have the offensive line in a good position heading into training camp.

“Those three guys (Pihlstrom, Slaughter, and Pearl), in addition to the new faces you’re going to see, have got me very excited about our offensive play,” Bielema said.

Good vibes inside the Smith Center heading into training camp

Despite returning the least production in the Big Ten, Bielema feels great about where the Illini stood less than one week from the start of training camp.

“One of the things that jumped out to me, everybody that comes into that building and is around our players and engaged with our players, they talk about the vibe that’s in the Smith Center,” Bielema said. “I think it’s very real, and I can’t wait to see where it leads.”

Bielema says the fact he was able to get out on the recruiting trail and bring in his own freshman class is a big reason behind the feeling around the building, while the ability to use the transfer portal to fill some of the team’s biggest needs has also been important

“I would say going into this year, that’s what I know and appreciate more is I think I just know our roster so much more,” Bielema said. “We’ve had moments of adversity and moments of success and added players now that we’ve recruited, so there’s a really good vibe in the Smith Center right now.”

With last season now in the rearview mirror, Bielema and the Illini look to turn the page and build off a solid start to the new coaching staff’s time at Illinois.

“My hope is that we make as much gain this year as we did last year,” Bielema said. “I like our team. I like our roster. I love our staff. There’s a really good vibe in the Smith Center right now and hopefully going in the right direction.”

Though Lunney is in his first season with the Illini, Bielema says the players have already bought into his high-tempo system.

Illinois actually got a first-hand glimpse into what Lunney brings to the table, as the Illini faced off with Lunney’s former team, UTSA, in their second game of the season last year. The Roadrunners used a strong run and pass game to narrowly defeat the Illini in Champaign on Sept. 4.

“I think Barry’s got our players excited,” Bielema said. “They’re excited on the offensive side about the scheme and the way we’re playing.”

The Illini have one of the most dynamic running back duos in the Big Ten in Chase Brown and sophomore Josh McCray. The pair combined for seven rushing touchdowns in 2021, while Brown, who was named to the Maxwell Award and Doak Walker Award preseason watch lists this year, averaged over 100 yards per game and became just the third player in program history to record multiple 200- Yard rushing games in one season.

Williams also looks to build off a strong 2021 season after making the switch from quarterback to wide receiver, leading the Illini in receptions, receiving yards and receiving touchdowns.

QB1 has yet determined to be, though Bielema is excited for the competition within the quarterback room heading into training camp.

“I just love the room and the competition,” Bielema said. “I think our offensive guys, wide receivers: I’ll come over on Saturday morning at 6:30 or I’ll come back Saturday night at 6:30, and we’ll have guys out throwing on our grass field. I just never have seen that happen before, so I think our guys are all in.”

Importance of a Week Zero game

Like last year’s season opener against Nebraska, Illinois will open its 2022 schedule with a Week Zero contest, taking on Mountain West foe Wyoming on Aug. 27 before opening Big Ten play the following week.

Bielema says he likes the Week Zero game to get the team some in-game experience before taking on Indiana to begin conference action.

“We’re going to Indiana out of the gate, but I really wanted to have a home game,” Bielema said. “We have the least returning production, so I want to have a game at home.”

Martin echoed the sentiment expressed by his head coach, as the Week Zero game against Wyoming allows the Illini to “get our feet wet” before traveling to Bloomington, Indiana.

“This is a great opportunity to open up in Week Zero,” Martin said, “and we have Indiana after that, so just to be able to get our feet wet before heading into Big Ten play is pretty cool.”