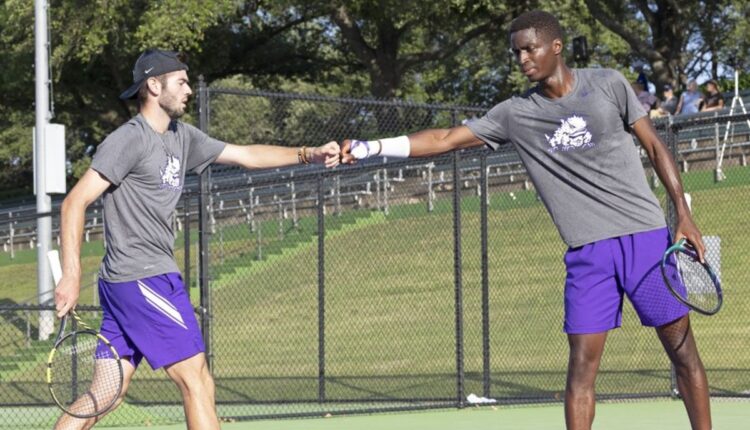 The historic season for the TCU men’s tennis team has come to an end. Luc Fomba other Jake Fearnley lost their First Round match on Tuesday evening in the NCAA Individual Doubles National Championships in Champaign, Illinois.

TCU as a team was the No. 1 seed in the team championship. They were eliminated during the Elite Eight quarterfinals last week. Fomba, Fearnley, and teammate Juan Carlos Aguilar remained in Champaign to participate in the individual singles and doubles tournaments. Fomba and Aguilar both won their First Round matches on Monday in the singles tournament. Both, however, were eliminated on Tuesday afternoon as neither won their Second Round match.

Fomba and Fearnley were the nation’s No. 1 doubles pairing in the nation. This was Fomba’s second consecutive season to play in the doubles tournament. He and his partner Alastair Gray made it to the Round of 16 last year. This was Fearnley’s debut in the individual tournament.

The duo met no. 33 Charles Bertimon and Maxence Bertimon, both from Virginia Commonwealth University, in Tuesday’s First Round. Fomba/Fearnley won their first set 6-3 but lost their second set 2-6. This forced a super set tiebreaker which is the first to 10 points. The VCU brothers won the tiebreaker 10-7, ending the season for Fomba and Fearnley.

It was a historic season for the TCU men’s tennis team that included the program’s first ITA Indoor National Championship in February and a sweep of the Big 12 regular season. Aguilar was a grad transfer after spending four years at Texas A&M. He looks to go pro now that the collegiate season is over. Fomba and Fearnley should both be back as part of the TCU team next season.

Next up: Both the singles and doubles tournaments continue in Champaign. Both championship matches will be played on Saturday, May 28.

Want to join the discussion? Click here to become a member of the Killer Frogs message board community today!

The Blackfeet Nation’s Plight Underscores the Fentanyl Crisis on Reservations