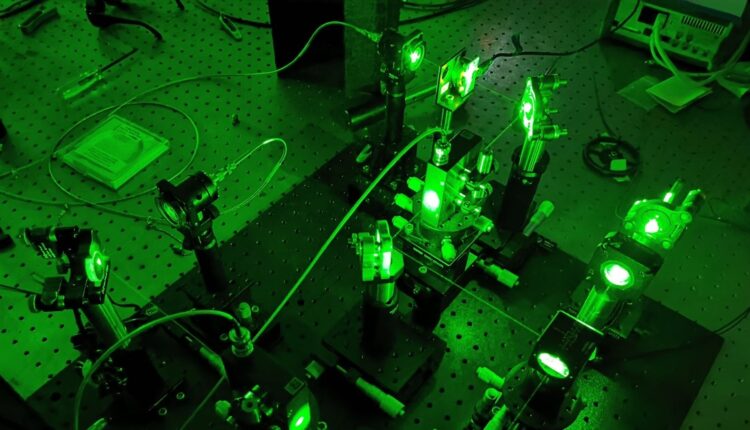 A new technology for fast imaging through holography allows you to see the invisible in images captured by a camera, such as z).

The invention uses visible or infrared light that is indirectly scattered by hidden objects in order to uncover and reconstruct things that are outside the immediately visible range when this light is returned to the camera. The walls become mirrors for these rays and the apparatus perceive the multiple reflections of each one of them.

The camera takes pictures of large areas with sub-millimeter precision and is therefore can see through the skin, even the smallest capillaries in operation. On the other hand, this technique has a high temporal resolution, something that allows you to get a clear view of moving objects like the heart beating behind the ribs, which in this case does not obstruct your vision.

The method was developed under the auspices of the DARPA agency, which is part of the US Department of Defense, but the university does not specify how it should be applied to combat or other military missions. For the authors, their primary potential lies in the non-invasive extraction of medical imaging, automotive early warning navigation and industrial inspection in a confined space. Other uses are endless, emphasizes the research team.

It’s like sending light through the palm of your hand

Seeing what’s hiding behind a corner and mapping an organ in the human body may seem like two very different challenges, but lead author of a related study, Florian Willomitzer, stated that they are actually closely related. Both have to do with light scatteringthat hits an object and spreads so that the direct image of the object is no longer visible.

“If you’ve ever tried shining a flashlight through your hand, you’ve put this phenomenon to the test,” said Willomitzer. Although some of the brightness of the flashlight is perceived on the other side, it seems that “in theory the shadow of the bones should also be projected”. “However, the light that passes through the bones travels in all directions in the tissue and completely erases the image of the shadow,” he added.

The inventors call this method ‘synthetic wavelength holography’, a term that refers to the use of two lasers and the combination of their reflected light so as not to have to resort to fast detectors capable of detecting the smallest nuances in the speed of each beam of light but they are very expensive. Instead of these tiny dimensions, the camera assemblesthe entire light field of an object in a hologram and uses it to reproduce the three-dimensional shape of this object in its entirety.

If you liked it, share it with your friends!

Disclaimer: This article is generated from the feed and is not edited by our team.

Stranded by the Pandemic, He Had Only Travel Insurance. It Left Him With a $38,000 Bill.