This Madison La Follette junior scored 40 points in 3 of her team’s 8 games. Here’s how. 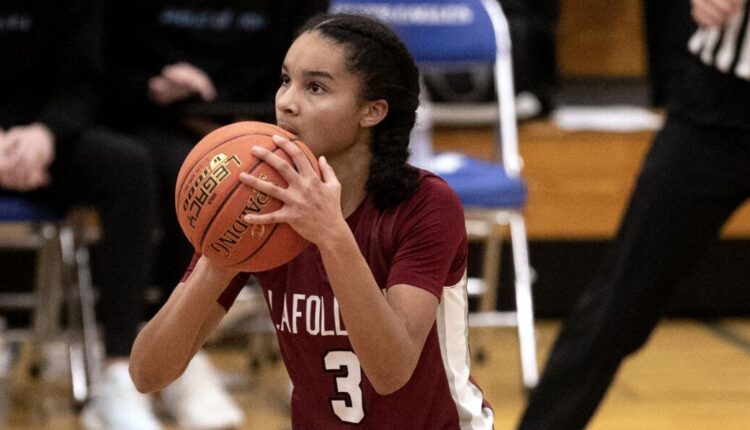 The scoring and rebounding numbers were startling.

Even Alayna West had to acknowledge that.

The Madison La Follette junior’s production has skyrocketed this season after being the fourth scoring option on the senior-laden girls basketball team last season.

This after averaging 11 points and 9.8 rebounds as a sophomore.

West, who has offers from North Dakota and Eastern Illinois and has started to receive interest from higher NCAA Division I programs, also is in the top 10 in the state in steals (6.0 per game), according to WisSports.net’s leader boards.

“She is so fast, so quick,” La Follette girls basketball coach Will Green said. “She doesn’t slow down. … Once it kicked in that she might do this every game, it was definitely astounding. And now I think she is very capable of doing that. And now we want her to do it.”

West believed she would do well this season, but said, “I didn’t think it would be as extreme as it is now with multiple 40 and 20 games. So that came as a shock.”

Green knew much of the team’s scoring production from last season was gone along with eight seniors, notably guards Demetria Prewitt, Aaliyah Smith and Malia Green, the coach’s daughter.

The quick-jumping West had been asked to play inside and crash the boards last season.

“Being a guard is my natural thing,” the 17-year-old West said. “I had to play the ‘5’ last year because that’s where the team needed me.”

Her role would have to change.

Most of the time, she’s playing point guard and carrying a big load for her team.

“I knew she could give us a lot of production, but I didn’t know it would be in the area of almost 40 points a game,” Green said. “And the rebound production. Wow.

“I had asked my team before the season started how we were going to get 45 points. The starting five said, ‘Oh coach, we can probably each score six or eight points.’ I said, ‘If all of you can get six or eight points, that will be great.’ Then the first night, she had 36 and the next night 48. She’s been consistently doing it for us and it’s been great. She’s just an outstanding athlete.”

West, who also competes in sprints and long jump during track and field season, has a knack for rebounding.

“I just think it’s how high I can jump,” she said. “I feel I’m off the floor grabbing the rebound before most other girls. It makes it easier.”

West played on boys basketball teams and up in age with girls teams when she was younger. She also played youth football with the Southside Raiders, Green said.

“That was our big man,” Chris Davis Jr., a 6-3 sophomore guard for the Sun Prairie West boys basketball team, said when asked about Alayna West. “She was our fifth, always. She used to be taller than all of us.

“She had the most heart of us. Now she’s averaging 50 points a game. Growing up, she was playing with boys and she also was playing with females. I’m grateful for her. I knew this was going to happen. I texted her, ‘This is going to be your best season.'”

“That’s really what my childhood was — playing outside basketball against my brothers and their friends and my cousins,” she said. “My (older) brother Anthony is the one I’ve played one-on-one the most.”

Anthony West, a former La Follette boys basketball standout, also is someone who has believed this was possible.

“I think this is a shock to a lot of people,” Alayna West said. “The only person that I could say called it from the beginning was my brother Anthony. He’s been saying, ‘You are going to have a breakout season.’ He said, ‘You should average 30 points and 20 rebounds.’ He’s been saying that already.”

“She played with the boys forever,” he said. “You just knew when she transitioned back to the girls, it was going to be impossible to guard her.”

West, who averages 5.1 assists per game, and Green are looking for her to be more efficient on the offensive end.

West, a second-team all-conference player last season, has been taking almost 30 shots a game and her shooting from the floor (about 41%) and free throw line (about 53%) need improvement.

She’s an active offensive rebounder. Her high rebounding totals sometimes are a product of rebounding her own missed shots in succession.

“So sometimes she’s getting like four rebounds in one possession,” Green said.

Her early season success has led to teams double-teaming and triple-teaming her or playing a box-and-one, Green said.

“It was something I wasn’t used to,” she said. “But now it doesn’t really matter what they do because I have to play how I have been playing.”

“What we are working on now is for her to understand how to see other people and see the whole floor,” Green said. “She has to be able to see the floor and get people involved and not force shots.”

West’s eye-popping start this season has been a cool thing for the Lancers.

“To have her at the top of the list of scoring and rebounding, that’s phenomenal for La Follette’s program,” Green said.

And for West, a good student who particularly enjoys math and history.

“She is finally getting her recognition,” Chris Davis said. “I think a lot of people didn’t know she was this good. I’ve been telling her mom since she was little that she’s a very special player.

“I think she’s going to go farther in life than a lot of girls that have come out of the Madison area because she has almost a 4.0, she’s a very good kid, very respectful, a very polite young lady. And she’s a heck of a player. I think she will go somewhere special, as a Division I player or anything in life, and she will be very successful.”

Check back for updates to the list as more area students announce their college commitments. And if you notice a local student athlete missing from the list, email the student’s information to [email protected]

Get in the game with our Prep Sports Newsletter

Sent weekly directly to your inbox!

Thousands without power in Missouri, Illinois

At least 9 cars in pileup crash on N. Main in Winnebago Co.