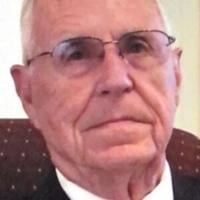 He briefly attended Bradley University at Peoria, Illinois, while working as a management trainee for the JC Penney Co.

Tom entered the United States Air Force in 1952 and spent a year in flight training. He retired from the Air Force in 1971 after 20 years of service and with the rank of major. He returned to Parsons.

He married Sara Alice Hodges in December 1952 at the First Baptist Church in Leland, Mississippi. They became the parents of three children. Sara preceded him in death on Aug. 22, 1969.

After returning to Parsons Tom worked 18 years for the state of Kansas in the driver’s license department. At the time of retirement, he was a supervisor for Labette and Cherokee counties.

He served as scoutmaster of Boy Scout Troop 11. He loved to travel and ride motorcycles in later years and was a member of the American Motorcycle Association. He loved to winter in south Texas and did so for many years.

He is survived by his three children, Lynn A Thomas of Parsons, Julie F McAdams of San Benito, Texas, and Scott A Falkenstien of Chanute; seven grandchildren; and 15 great-grandchildren.

The service will be officiating at 2 pm Tuesday at the Carson-Wall Funeral Home with the Rev. Wayne Mason. Burial will be in Oakwood Cemetery with military honors provided by the McConnell Air Force Base funeral detail.

The family will receive friends from 6 to 7 pm Monday at the Carson-Wall Funeral Home. Piano music will be provided by Ken Weaver during the visitation.

Memorials are suggested to either the American Cancer Society or St. Jude’s Hospital. They may be left at or sent to the Carson-Wall Funeral Home, PO Box 942, Parsons, KS, 67357.

Online messages may be sent to www.wallfuneralservices.com.

Hundreds of US Hospitals Sue Patients or Threaten Their Credit, a KHN Investigation Finds