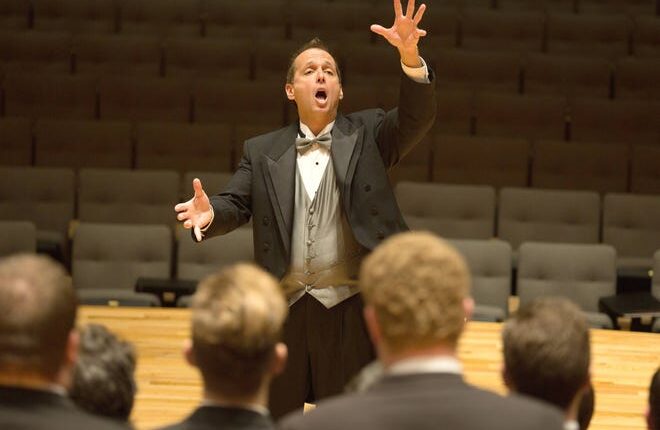 Richard Rossi is preparing to bring voices from across the country to perform in Erie.

“What makes it professional is that they’re (singers) all paid and they all have degrees or extensive experience performing,” Rossi, 60, said. “It’s like the symphony (Erie Philharmonic); They’re all paid, but this is the first-ever (paid chorus) in Erie, so it’s sort of exciting.

“And I pull players from all over. If I didn’t, I’d be limiting myself just to the region. And while that’s fine, I wanted to bring in talent from all over because that’s what a professional group would do.”

The mission and vision of Transcendence is to present professional choral performances that inspire, cultivate and transform lives through vocal artistry and musical excellence, according to its website.

Transcendence will present its premiere concert, “The Essence of Christmas,” which will be held at St. Peter Cathedral, 230 W. 10th St. in Erie on Dec. 17 at 7 pm Julia Jamieson, award-winning harpist, will accompany the choir as a special guest.

When deciding on the music for the concert, Rossi said he was going for an “eclectic repertoire.”

“My goal is to sing different colors so they don’t all sound the same on every piece,” he said. “Most of the music spans a huge spectrum, and a lot is from the 20th century and 21st century, some from the Romantic (Period).

“If you close your eyes you’d think there were 4 different choirs performing, and that’s my goal because I get tired of hearing conductors do everything the same way.”

Related:Save your money for presents. Here is a list of cheap holiday events around Erie

Transcendence will present Kirke Mechem’s “The Seven Joys of Christmas” along with several related choral works, including five written by Rossi.

“The pieces intertwine,” Rossi said. “You’ll see the seven joys is the final product in the sense that it weaves the rest of the songs together into one fabric. I did it to make the program interesting. I have to be aware that the ear can get tired, so we have bells, then it’s chant and then we go into harp and then sing acapella and then harp again. They should all be able to leave whistling something.”

To make it all happen, Rossi hired six sopranos, five altos, five tenors and five basses. Some of the singers are from Erie, while others are from Princeton, New Jersey; Virginia Beach, VA; Chicago and New York City.

“It’s an exciting opportunity, especially after the last few years we’ve had,” she said. “I just thought what an incredible combination of opportunities to get back to an experience where I was exchanging the privilege of making music with other talented individuals and get to work with Dr. Rossi again. It just seemed like a home run opportunity.”

DeAngelis said her relationship with Rossi goes back at least 15 years. While she was the soprano soloist at First Presbyterian Church in Champaign, Illinois, Rossi was the church’s organist. The two also put together a recital titled, “A Keyboard Extravaganza” in 2010.

Reconnecting with Rossi as a member of Transcendence gives DeAngelis the chance to work with someone she considers one of the best musicians she’s ever known.

“I love that he found a way to draw in much newer music, including his own, which is an additionally special experience to be singing music of a new, living composer,” DeAngelis said. “The genius of what he’s done ― finding music that compliments each other but also represents a very wide array of music ― all that comes back to the same purpose, which is transcending; bringing people to a higher place, especially at a time in the year when it’s not only celebratory, but reflective.”

How Transcendence came to be

When Rossi was hired as St. Peter Cathedral’s organist in 2019, he knew he eventually wanted to start a professional choir to cater to his passion for conducting.

“I am a conductor, that’s my main thing, the thing that I love and Transcendence was an opportunity to move into that direction,” Rossi said. “And, Cathedrals over the centuries were the center of the arts for a long time before we started having concerts … So in a way, we’re sort of restoring that epic history of providing music in our Cathedrals.”

The December production will cost about $15,000, and is being partially funded by Herbert Lasky, a friend and colleague from Eastern Illinois University, who supported Rossi and his musical efforts for over 15 years.

Following Transcendence’s premiere concert in December, the group expects to hold its next concert – “The Essence of Spring” – in June. Rossi hopes the group will continue to make music past its inaugural season.

“It’s about making beauty and making art at a high level… Being able to work and make music at that level in Erie, this repertoire is totally different,” Rossi said. “But also, we can be a model for other choirs and attract more people to want to come or audition.”

What: Transcendence premiere concert, “The Essence of Christmas”