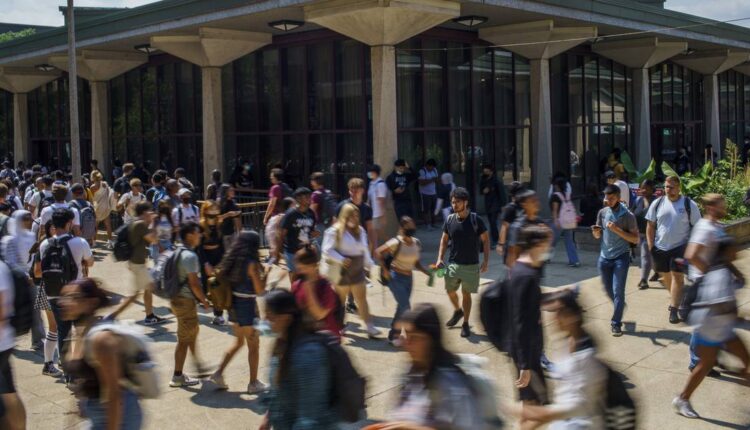 Lawmakers alleged Monday that racist comments and unequal treatment of students has been ongoing for years at the University of Illinois at Chicago College of Dentistry, including racist imagery and statements by one instructor in particular.

The imagery included a photo of someone with a noose around the neck and a hood over the head, and the statements included use of the N-word and asking about a student of color’s “natural hair,” the lawmakers alleged in a letter that demanded school officials address the situation.

U.S. Rep. Robin Kelly and Danny Davis and state Rep. La Shawn Ford signed the letter dated Nov. 21. It was addressed to university President Timothy Killeen and asked for a meeting by Nov. 30.

“Students and alumni of UIC College of Dentistry have expressed to us that racist teachings and the unequal treatment of students has been ongoing for years,” the letter went on. “A recent revelation made us aware of a noose appearing in a PowerPoint presentation for seven years, which is disturbing. … This professor has continued to teach without any response or action from the university. Students of color have reportedly continued to be targeted at the university from being asked about their ‘natural hair’ to being called the N-word.”

University administrators launched an investigation into the allegations and will respond to the legislators, said Adrienne Nazon, vice president of external relations and communications.

Officials didn’t answer specific questions about the allegations, but issued the following statement:

“UIC does not tolerate discrimination or harassment in any form anywhere on campus. The university is committed to a safe, respectful and welcoming campus environment for students and staff, both in and outside of the classroom.

“When allegations of such conduct arise, they are investigated immediately, and actions are taken pursuant to all applicable policies and protocols. In this matter, the University’s Office for Access and Equity (OAE) immediately launched a full investigation. The College of Dentistry is actively working with students and employees to address their concerns and ensure they receive needed support. We will continue to strive to be a community that lives our values ​​of mutual respect, dignity and equity, where all can thrive while feeling safe and supported.”

The lawmakers’ letter also asks when the university found out about the professor’s behavior and what steps have been taken in response.

The professor was not named in the letter in order to focus on “systemic” issues, Kelly’s spokeswoman Eliana Locke said.

dr David Miller, a Black dentist who graduated from UI in 1988, said he was called the N-word and got into a scuffle over it during a social event in the first week of school in 1984.

Miller said he does not know the accused professor, but has heard of race-related issues at the school from students and faculty. He said students have told him that some derogatory remarks have been made recently at the school. He has seen the picture of the noose mentioned in the lawmakers’ letter and noted it was captioned, “How do you measure neck circumference in a dental office?”

It may have been an attempt at humor, he said, but isn’t funny, and conjures recollections of past lynchings of African Americans.

“This shouldn’t be tolerated at all,” he said.

“In this age of cultural sensitivity you’d think that racist images would’ve been gone by now, but that’s not the case,” he said. “These things become microaggressions against students who know if they speak up, there may be retaliation.”

Kelly added a statement saying the university must be held accountable.

“The lack of culturally competent training is shocking, especially when untreated dental disease disproportionately affects racial and ethnic minorities,” Kelly said. “For the sake of future students and patients, the University of Illinois must commit to changes that will welcome students of all backgrounds.”