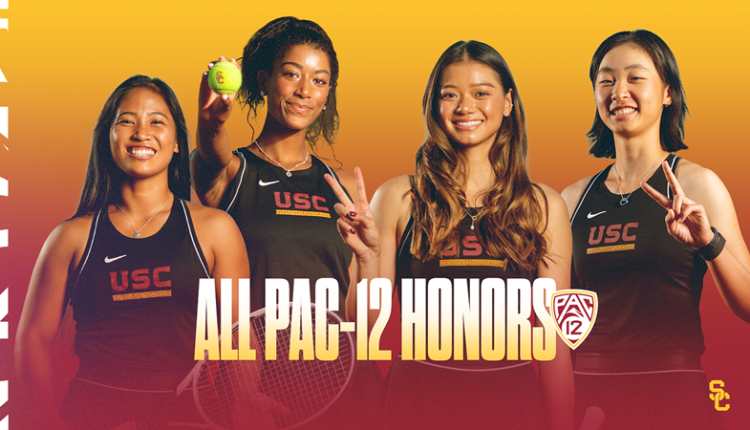 Currently ranked No. 50 in the nation, seniorSalma Ewingholds a 19-13 record in singles and went 4-3 in conference matches.This season, Ewing has played at both the No. 2 and no. 1 spot, defeating nine ranked opponents this season and clinching two matches for the Trojans. Most recently, Ewing defeated UCLA’s #28 Abigail Forbes 6-2, 7-6(7) to clinch the match for USC during her senior day.

Junior Eryn Cayetanoearn here Second Pac-12 Conference athletic honor by receiving placement on the First Team. the no 7 ranked Cayetano is 35-10 on the season and 7-3 in Pac-12 play. She has the most singles wins of any player on the USC roster and has collected 16 wins over ranked opponents this season, including six in the Top 20.Last year, Cayetano earned her first Pac-12 postseason honor, receiving placement on the Second Team.

Cayetano and Ewing will compete in the NCAA Singles Championship in Champaign, Illinois at the Khan Outdoor Tennis Complex beginning on May 23 in the pursuit of an individual national title.

sophomore Naomi Cheong Earned her first Pac-12 postseason honor, boasting a 10-2 overall record. Cheong, currently ranked No. 84 missed the beginning of the season due to injury but returned to competition in March and has been a force for the Trojans since. She is currently riding a four-match win streak.
Red shirt sophomore Snow Han also received her first Pac-12 postseason honor. the no 104 ranked Han is 32-11 on the season and has defeated six nationally ranked opponents. She is 7-3 in Pac-12 play and had a 13-match unbeaten streak spanning from January 29 through March 19.
Under the tutelage of head coach Alison Swain, USC will face San Diego State (17-6) on Friday (May 7) at 10 am PT during the First Round of the NCAA Tournament. Should the Trojans defeat the Aztecs USC will take on the winner of the First Round matchup between No. 8 seed Pepperdine and Denver on Saturday (May 8) at 1 pm PT.