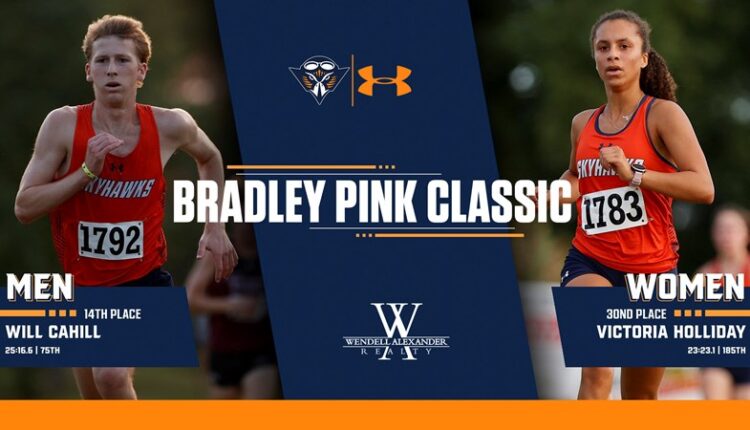 PEORIA, Fig .– With the Ohio Valley Conference Cross Country Championships only two weeks away, the University of Tennessee at Martin traveled north to the Land of Lincoln for its final vote before the championship event at the Bradley Pink Classic, which was being played at Newman Golf complete course in Peoria, Illinois.

Almost the entire team was able to compete between the white and red college races in preparation for a championship boost. The loaded fields included 37 Division I schools vying for the title of the meeting – including several regionally graded programs.

The Skyhawk women started the main racing events with the women’s 6 km red race. Runner-up Erica Fisher went into the young group in her first 6 km race of the season with a time of 22: 39.4. Newcomer Lilia Alvarez also impressed in her debut season with second place in the team with a time of 23: 12.9 for a new personal best.

Three consecutive newcomers rounded out the five points for the women’s team, with Victoria Holliday crossing with 23: 23.1 while Annie Amundsen was not far behind with 23: 42.8. The group was completed by Lydia Tankersley with a time of 24: 01.9.

In the final of four races in the afternoon, the majority of Skyhawk men competed in the men’s 8k Red race. Just like in the first three games of the season, Senior Luke McNair again led the field for the Skyhawks with a time of 24: 51.2 – and thus just missed a top 10 time in program history by less than four seconds – while he finished 34.

Two other men ranked in the top 75 of the loaded field, including nearly 250 athletes, such as the under-class couple George Payne and Will Cahill continue to stand out. Payne has proven his progress in the offseason as another scorer in second place by finishing 66th with a time of 25: 13.6. Close behind followed by Cahill, who impressed as a newcomer with a 75th place at 25: 16.6 thanks to a new PR.

The fifth number of points for UT Martin was rounded off by Senior Will Oglesby, who finished fourth on the team with a PR time of 25: 26.8, while his senior colleague Alex Schell achieved a mark of 25: 36.2.

UT Martin will use the next two weeks to prepare before competing for the OVC championship crown at Percy Warner Park in Nashville, Tennessee on Saturday, October 30th

Vote the Rockford Register Star High School Athlete of the…