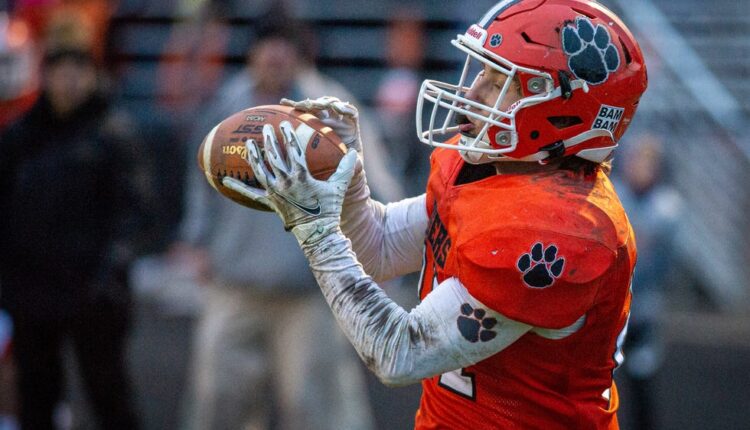 In the post-season fall last week, a few teams from the region were still on duty, giving our readers another chance to vote for the Rockford Register Star High School Athlete of the Week.

Vote on rrstar.com or the poll below and also choose from the nominees listed below.

Lena Winslow Soccer: The career game of Star Back leads Lena-Winslow past Fulton into the soccer semifinals

Byron soccer: After a dramatic TD in the last few seconds, Tigers are back in the state semi-finals

Arndt led Aquin with 15 kills as the Bulldogs defeated Springfield Lutheran 25-22, 25-17 on Saturday to finish third in the girls’ Class 1A volleyball tournament. Aquin (39-3-1) lost a tough rule of three against the eventual national champions in the semi-finals on Friday, but recovered to become strong and win the school’s sixth national cup. Each of the five previous teams that won the State Cup returned the next season to win the State title.

Binkley caught QB Braden Smith’s game-winning 10-yard touchdown pass nine seconds behind in Saturday’s Class 3A quarter-final win over Reed-Custer. That came after being the workhorse of the backcourt (and one of the defensive stars) all day. Binkley had 139 yards of rushing and a TD on 26 carries.

Colvin won two state medals at the IHSA State Finals for Girls in Swimming and Diving on Saturday at Westmont and finished 11th in the 50 and 100 yard freestyle races. Colvin, along with junior colleague Mikayla Durkin from Guilford, was the only two locals to reach the state finals on Saturday.

Durkin scored a time of 23.64 and finished ninth in the 50s freestyle race at the state finals on Saturday. Durkin won the 50 Free at the Sections and had qualified for both the 50 and 100 Free for the state.

Modestly paying tribute to his offensive line after the game, Roby had 109 yards and two TDs on his first two carries on Saturday, then stormed for 257 yards and three touchdowns in the first half while taking Le-win to a 54-28- Victory led. The win over Fulton put the Panthers in the Class 1A semifinals for the fourth time in a row. “All of the credit goes to that line,” said Roby.

Sayles led Hononegah by 48 yards on three carries, caught two passes for 26 yards and had team highs with 8 1/2 tackles and 4 1/2 tackles for the loss on defense on Saturday. But Hononegah (11-1) lost 36-16 to St. Rita (10-2) and Ohio state recruit Kaleb Brown in the Class 7A quarterfinal showdown as Brown had seven catches for 116 yards and three TDs.

Scott had a career high of 18 kills in the Class 3A state volleyball game on Saturday when Belvidere North (39-3) lost in three sets to LaGrange Park Nazareth to finish second. Scott and Belvidere North fought hard during a 25-18, 20-25, 25-21 loss in the final and even led 13-7 in the final set.

Whisenand was 17 of 30 for 164 yards through the air with two touchdown passes – a 35-yarder in the first half to Stuart Hale and a 15-yarder to Bryce Goodwine late. But St. Rita overtook Hononegah 440 yards to 215 and it retreated along the way.