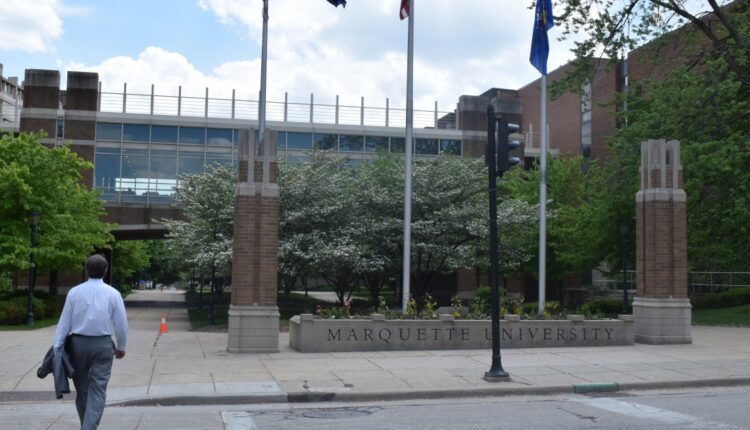 Marquette University officials announced Friday the school had sold 11 acres of land to developers who have plans to build a new sports and entertainment district, including a soccer stadium and indoor concert venue, in that part of Milwaukee.

The land which the university purchased in 2014 and 2015 is located northeast of the Marquette Interchange, and bordered by North 6th Street to the east and Michigan Street to the north.

The school sold the land to Bear Development, who is joining with Kacmarcik Enterprises to redevelop the land, according to school officials. The proposed district would include an 8,000-seat stadium, which could be a home to a professional soccer club, a concert venue, a hotel, multi-family residential housing, retail stores and food and beverage locations.

Officials said the stadium would also be the home field for Marquette’s men’s and women’s soccer and lacrosse teams.

The location currently has several vacant parcels of land and parking lots. It also has a vacant hotel building, an office building and the Marquette Behavior Analysis Program Building. All the buildings are slated to be demolished and tenants will be moved.

According to the university, the new district is “projected to create hundreds of new jobs in the community and draw a million visitors annually.”

[email protected] has sold an 11-acre parcel of land, located to the northeast of the Marquette Interchange, to Bear Development who, together with Kacmarcik Enterprises, plans to develop the area into a vibrant sports and entertainment district. https://t.co/PoATlKRLjy

The seven-day average for new COVID-19 cases in Wisconsin is 1,980 as of Thursday. The Wisconsin Department of Health Services has confirmed 12,966 total deaths from the disease.

On Thursday, the Centers for Disease Control and Prevention signed off on booster shots for children ages 5 to 11. Until now, only children ages 12 and older and adults were eligible for a booster.

“If your child is 5 or older and is not one of the nearly 122,000 Wisconsin children who have started and completed their initial two-dose series, it is not too late. Getting your child vaccinated can help protect them from the potentially severe consequences of COVID-19 and help prevent them from spreading illness to others,” Timberlake said in the statement Friday.

On Tuesday, the Biden administration announced a third round of free at-home COVID-19 tests. Each US household is eligible for up to eight more tests via mail. Order more tests at COVIDTests.gov or call 1-800-232-0233.

A Chippewa County artist hopes to honor a 10-year-old girl who was killed in Chippewa Falls with painted-on car designs of a purple flower that features Lily Peters’ first name on one of the petals.

Lacey Ashwell, owner of LA Sign Design, said it takes a few minutes to paint onto a car window. The paint should last through a few rainstorms, the Eau Claire Leader-Telegram reported.

Ashwell is planning a drive-through window-painting event on June 12 at Marshall Park in Chippewa Falls. Drivers can pull up to get the design painted on their cars. The event awaits permit approval from the Chippewa Falls City Council.

Iliana (Lily) Peters, of Chippewa Falls, was strangled and sexually assaulted on a walking trail near the Jacob Leinenkugel Brewing Co. on April 24.

The 14-year-old accused of killing her has been charged with first-degree intentional homicide and two counts of sexual assault and is being held on a $1 million cash bond.

A dancing velociraptor in the doctor’s office’s hallway?

A baby triceratops near your hospital bed?

The little animatronic creatures were just what the doctor ordered.

Last week, a group of child life specialists took these dinosaurs for a trip to HSHS St. Vincent Children’s Hospital in Green Bay to cheer up their youngest patients.

The dinos are one of the ways the hospital is working with children to put their minds at ease and provide a bit of an escape — and hopefully some laughs.

As the Green Bay Press Gazette reported, St. Vincent Children’s Hospital is the only hospital in that region with a dedicated child life team. Child life specialists, according to the paper, work with children “to explain in terms they understand why they’re in the hospital. Knowledge, rather than withholding information, can put a child’s mind at ease and meet them at their level. And then , of course, there’s lots of playtime.”

At last week’s visit, a teenager who has had a difficult time with her health, welcomed the distraction.

“She had the dinosaur in the room with her for five minutes. She didn’t have to think about why she was in the hospital room. Being in a hospital doesn’t have to mean always thinking about your diagnosis,” said Ashley Thompson , child life supervisor at HSHS St Vincent Children’s Hospital.

The change means earlier deadlines for reporters’ stories to make the print edition, so late-breaking news or results from the previous night’s games will no longer be in that day’s print version.

George Stanley, the paper’s editor, said the newspaper will be “entirely what it mostly has been: A place to find great in-depth enterprise reporting of stories most important to people in Wisconsin.”

Stanley reiterated that breaking news and sports coverage will still happen, but primarily though digital and mobile services.

Child ID kits to be distributed over next few weeks

Over the next few weeks, child ID kits will be dispersed to Wisconsin families as a way to help keep children safe.

Parents and guardians can use the kits to record their children’s physical characteristics and fingerprints onto ID cards, reports WFRV, if that information is ever needed by police.

The kits are free and are made available thanks to a partnership between Wisconsin attorney general Josh Kaul, the Green Bay Packers, Alliant Energy, the International Brotherhood of Electrical Workers and the National Child ID Program.

“No parent should have to go through the nightmare of having a missing child, but thousands of parents are confronted with that tragedy every year,” Kaul said. “The National Child Identification Program empowers parents to collect information that can assist with identification if the unthinkable occurs and a child goes missing.”

How the formula shortage became so dire

In this story, NPR explains how a single plant can have a dramatic impact on the production and availability of infant formula in the United States.

Guardians have been struggling to access formula for weeks and weeks — and on Wednesday, President Joe Biden invoked the Defense Production Act, which, among many things, ensures formula manufacturers are the first to receive necessary ingredients before other customers.

Earlier this week, the Food and Drug Administration announced emergency measures — including importing formula from overseas — to get more baby formula on the shelves as soon as possible.

Infant formula available in the US is almost an entirely domestic production for a variety of reasons, including safety regulations to protect infants. In the US, four companies control 90 percent of the market, and a government program has also contributed to the shortages across the United States.

As NPR reported: The four companies “operate a relatively small number of formula factories in order to maximize efficiency and keep their production costs low.” So when one plant closes, like the one in Michigan, that has a big impact on the entire industry — and the infants relying on formula.

Editor’s note: The Associated Press contributed to this report.