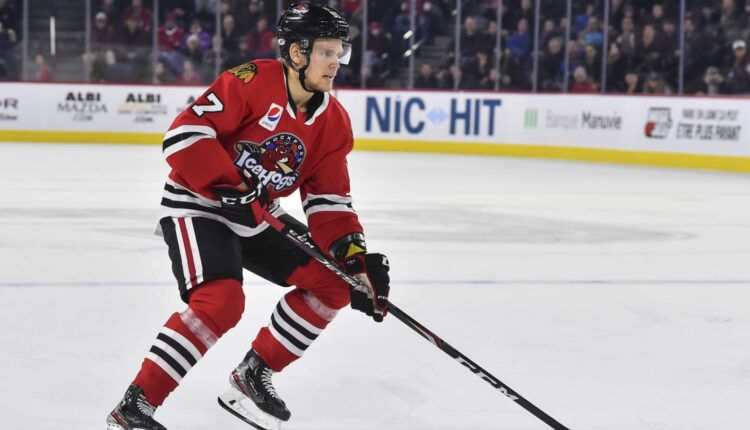 On Saturday, May 7th, the Rockford IceHogs, the AHL affiliate of the Chicago Blackhawks finished a two game sweep in a best of three series against the Texas Stars (affiliate of the Dallas Stars). They are now set up to play the Chicago Wolves (affiliate of the Carolina Hurricanes) in a best of five series starting on Thursday, May 12. While I am fully aware that this page is not called “IceHog Up” I wanted to take a few moments to acknowledge the importance of what is going on during these Calder Cup Playoffs in the AHL.

What a special night at @BMOHarrisCenter! @goicehogs with a 1-0 OT win in Game 2 to sweep the @TexasStars and head to the Central Div. Semis vs. @Chicago_Wolves! pic.twitter.com/5aTZ8x9112

What you have to remember is that every player on the team has the potential (and possibly likelihood) of playing on the Blackhawks at some point or another. If they don’t play for the team, then they are likely to be used in a trade package of some sort years down the road. These are not just random players, they are the Blackhawks’ acquired guys. They matter to the team directly.

The IceHogs’ product has not been strong since joining with the Blackhawks, largely because of the overwhelming success of the 2010s, that kept the AHL affiliate bereft of talent as all hands were on deck for the Stanley Cup Championship runs. Just now, they are beginning to get built up, and this matters in the grand scheme for the Blackhawks.

Contributors from this year like Alex Vlasic, Alec Regula, Mike Hardman, Ian Mitchell, and Lukas Reichel are all playing for the IceHogs. While certain contributors (like a Mike Hardman) may not be in the long term future plans, Lukas Reichel certainly is, as well as Alec Regula. Additionally, first round draft pick Nolan Allan and second rounder (and younger brother of Kirby Dach) Colton Dach were called up to the IceHogs in time for the playoff run. Goalie Arvid Soderblom looks like he could also have some serious future with the Blackhawks.

Thru 2 playoff games @goicehogs Arvid Soderblom has 69 saves & has allowed but one goal in 60:56 of hockey. Nothing trumps a hot goaltender in the playoffs. Hope for the future too for the Blackhawks in goal. Let’s see how long this young man can keep this up! Next up the Wolves! pic.twitter.com/ll1Dksy4vi

I know it is easy to ignore the AHL. It’s not as great of a product. The big names are at the NHL level. Some of the names (like IceHogs) are kind of cheesy. I get it. But I am telling you it matters.

These players have gone through some of the similar off-ice effects as their professional counterparts. With the very necessary firing of Jeremy Colliton early in the season required Rockford’s head coach, Derek King to become the new head honcho in Chicago. This of course left assistant coach, Anders Sorensen as the head coach at Rockford. Coaching changes can be good, but they are always a bump in the road for a player’s development. There is always a learning curve.

But these players remained resilient. They also had to withstand their best player, Lukas Reichel being called up during a stretch when they needed him most to clinch a playoff spot. Regula and Vlasic and Stillman were called up. It’s an ever-changing landscape. And for the IceHogs to find themselves winning a postseason series and facing off with one of the top teams in the playoffs means something to these players. It’s a taste of the postseason at the professional level. It’s experienced in incredibly competitive circumstances. It’s critical to their development to have these experiences and that is why what happens in Rockford matters so much.

Reichel and Soderblom and Regula amongst others will be up some day and if you want the rebuild to rebound quickly, these players need those experienced in Rockford.

We’ll see how far Rockford is able to go, and how well they can hang with the Wolves.

In the meantime, enjoy the ride, sign up for AHL tv so you can watch the postseason. And if you are in the Chicago area, go buy some tickets at the Allstate Arena in Rosemont, and see the future with your own eyes.

Vaid picked as next director of McKinley Health Center | News