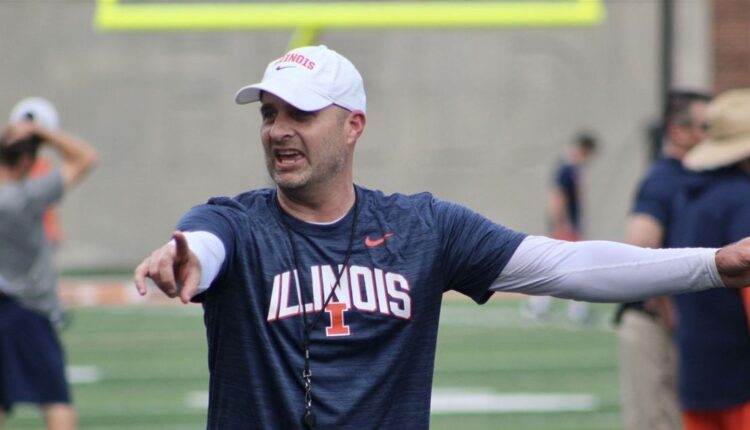 CHAMPAIGN — Illinois had some success on Friday moving the ball against an Indiana defense but is likely lamenting the lost opportunities to put more points on the board.

The Illini turned it over three times inside Indiana territory in the second half to allow the Hoosiers’ late rally. Illinois had 448 yards of total offense but two fumbles, a turnover on downs and an interception were crucial in allowing Indiana to notch a home win.

Illinois was 3-of-5 in the red zone and offensive coordinator Barry Lunney Jr. and his team have to quickly wash out the taste of a tough road lost to host Virginia at 3 pm Saturday (ESPNU).

Running back Chase Brown had 199 yards on 36 carries with wide receiver Isaiah Williams had nine receptions for 112 yards and a touchdown. Illini quarterback Tommy DeVito was 21-of-35 passing for 232 yards, two touchdowns and an interception.

Here’s what Lunney said during his weekly press conference in the press box on the eighth floor at Memorial Stadium.

You were able to move the ball very well but what happened in not being able to convert once you got on their side of the field?

Lunney: “We just didn’t execute with a couple play calls and within the play calls of the execution. It just wasn’t good enough for us to get the points that we needed to get to win the football game. Moving the ball is just half that. The most important part is figuring out a way to score touchdowns and not have field goal opportunities. That’s certainly an area we came up short in on Friday night.”

What was your perspective on the fourth-down call?

Lunney: “Certainly one that I’d like to have back. It kind of got in that awkward area where you’re so close to the goal line but you’re still like a yard and a half. I didn’t put our guys in a position to succeed. That’s something I’ve got to own and certainly have and will learn from it and the next opportunity to have to be better prepared to give our guys a chance to punch the ball in the end zone. That’s the bottom line.”

Hill of A Race Obstacle Run