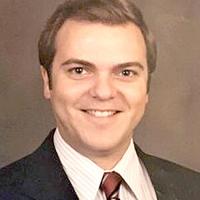 He graduated from Monticello High School in 1977 and was involved in track, wrestling and FFA. He attended Franklin College and became a member of SAE fraternity along with his brother Todd. Morey graduated from Southern Illinois University and University of Illinois with a double degree in Agriculture and Ag Business. Morey was an avid Cubs and Indianapolis 500 fan and enjoyed following his favorite teams including the Bears and University of Illinois. He and his wife Julee loved traveling each year to North Carolina. Along with his own farmland, Morey owned and operated Hamilton Farm Management. Morey was kind-hearted and loved by all that him knew.

Morey is survived by his wife, Julee and mother Shirley Hamilton of Decatur, Illinois. He is also survived by: sister, Angela Stoerger (Louis) of Cisco, Illinois and brother, Todd Hamilton (Dianne) of Angola, Indiana; stepsons, Sam Greenstreet (Kelly) of Rockford, Illinois; Brandon Greenstreet (Brynn) and step-grandchildren (Rhodin, Cierra and Cailee) of Fairbanks, Alaska; four nephews, two nieces, and eleven grandnephews and nieces. He was preceded in death by his father, Lawrence Hamilton.

Funeral services were held at 11:00 am Monday, March 14 at Church of Christ, 2601 Philo Rd. Urbana, Illinois with a visitation one hour prior to the service. Rev. Richard Miller officiated. Burial will be at Croninger Cemetery in Cisco, Illinois. In lieu of flowers, memorials can be made to: The Wounded Warrior Project (woundedwarriorproject.org), Shriners Children’s Hospital (donate.lovetotherescue.org), or the Philo Road Church of Christ (www.livechrist.church). Condolences may be offered at www.renner-wikoffchapel.com.