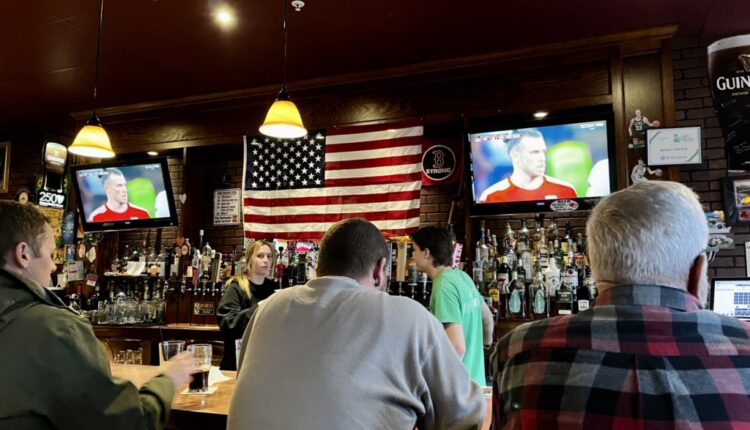 Tim Weah sliced ​​through the Welsh defense, collected Christian Pulisic’s delicate pass and fired a shot home, earning both a crucial goal for the United States Men’s National Soccer Team and a deafening roar from the crowd at Qatar’s Ahmed bin Ali Stadium.

Six thousand three hundred miles away, two dozen fans at Byrnes’ Irish Pub in Brunswick let out their own cheer, joining a chorus of support for the FIFA Men’s World Cup.

Husband and wife Brian Seheult and Janelle Jorgensen, visiting the Midcoast from Champaign, Illinois, were among those who attended Byrnes’ watch party Monday afternoon.

“We don’t like to miss World Cup games,” Seheult said. “It’s the biggest game in the world, so this is fun to see.”

More than 3.5 billion people watched the 2018 World Cup, according to FIFA, nearly one out of every two humans on the planet. While the popularity of professional soccer lags behind sports like football and basketball in the US, the quadrennial tournament consistently captures the attention of casual sports viewers as well as fanatics, according to Pat Byrnes, manager of the pub’s Brunswick location.

Normally closed on Mondays, Byrnes’ drew both groups of friends and solo watchers to cheer on the Americans in their opening match against Wales. Several Portland bars and breweries, which serve as weekly destinations for the city’s surprisingly robust soccer fandom, held their own events.

Watching the tournament in public spaces offers a rare sense of camaraderie and shared experience with legions of other viewers around the world, said Gabe Hoffman-Johnson, whose group USL to Portland is working to bring a professional soccer team to Maine.

“It’s almost unfathomable the sort of impact and scale that this event has in the world,” he said. “It’s just this transcendent experience.”

Tim Weah, of the United States, celebrates after scoring in the first half of their World Cup game against Wales on Monday at the Ahmad Bin Ali Stadium in Al Rayyan, Qatar. Darko Vojinovic/Associated Press

The US failed to qualify for the World Cup in 2018, leaving fans of the men’s national team hungrier than usual to support their side this fall, according to Tim Adams, owner of Soccer Post Freeport. Over the past week, customers have flooded the store to buy replicas of Pulisic’s jersey and anything else bearing the USA shield.

Yet Maine’s excitement for the global tournament extends beyond the American team; Adams reports that gear championing star-studded squads from Brazil, Germany and England have also been flying off his shelves.

“It’s a lot of fun when whole families are coming in, and one kid likes Portugal, one kid likes Argentina, parents are for the USA,” he said. “That’s what this is all about really — bringing the whole community together.”

Friday will provide another opportunity to do just that when the US takes on high-powered England. Thanks to a late equalizer from Welsh star Gareth Bale that spoiled an American win on Monday afternoon, the England match could dictate the Yanks’ chances of moving on to the tournament’s knock-out stages.

Headlining another slate of watch parties will be a collaboration between USL to Portland and Downtown Portland, which Hoffman-Johnson expects will draw hundreds of fans to the city’s Monument Square to watch the game outdoors. He hopes the “bring-your-own-chair” event, which kicks off at 11:30 am before the start of the 2 pm match, will be the start of a new community ritual.

“It has the potential,” he said, “to be a very, very exciting and special day for Portland.”