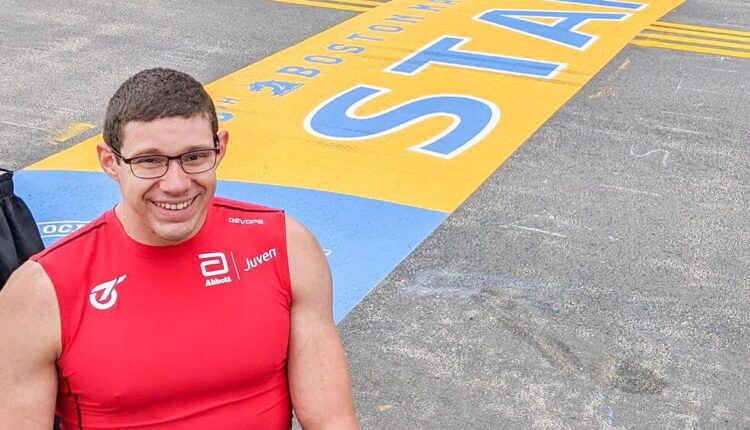 BOSTON — It wasn’t until Daniel Romanchuk arrived in Hopkinton, Mass., for the start of Monday’s Boston Marathon that the 23-year-old member of the University of Illinois wheelchair racing team realized the race would be completely different than he’d expected.

Marcel Hug, who has dominated the world of wheelchair racing since debuting a new high-tech, highly expensive chair at last summer’s Paralympics, wouldn’t be racing.

“I’m just praying and hoping for a quick recovery from him,” said Romanchuk, who took the racing world by storm as a 20-year-old when he began a string of six wins in eight world marathon majors.

At that point, Romanchuk became the prohibitive favorite. After hanging with the pack early, he broke away along with teammate Aaron Pike before eventually taking a commanding lead during the second half of the race and winning his second Boston Marathon title in a time of 1 hour, 26 minutes, 58 seconds.

He finished nearly six minutes ahead of Pike, who took second just a month after competing in the Winter Paralympics in cross-country skiing and the biathlon.

“From the start, it was kind of a, ‘Hang on for dear life,’ with some of the bigger guys, because I don’t go down hills well,” Romanchuk said Monday. “For the conditions, I’m pretty happy with the time. It was a slight headwind. I mostly felt it the second half of the course, which is where all of the uphills are, so maybe I was just feeling those.”

When Hug does return, Romanchuk is hoping to find a way to close the gap after the Swiss racer won five golds at last summer’s Paralympics and five of the next six world marathon majors. Romanchuk interned with racing wheelchair manufacturer Top End in December, working with engineers to try to make a faster, lighter, more aerodynamic chair.

But he doesn’t want to close the gap alone.

“Every so often, I’ll get a message from someone around the world saying, ‘How do you get into the sport? It’s expensive,’” he said. “I was working with (Top End) on just general chair improvements, making it more aerodynamic, and things like that, but also keeping in mind keeping things attainable for a lot of athletes as far as cost is concerned.

“Some changes might be in the works,” he added, “but right now, we’re working on testing and things like that. Stay tuned.”

Seven months ago, the UI’s Susannah Scaroni suffered a career-threatening spinal injury when she was hit by a car at full speed while she was training.

On Monday, she took second place in the Boston Marathon, her first marathon since the accident. Scaroni finished just over five minutes behind Switzerland’s Manuela Schar and more than six minutes ahead of third-place Madison De Rosario.