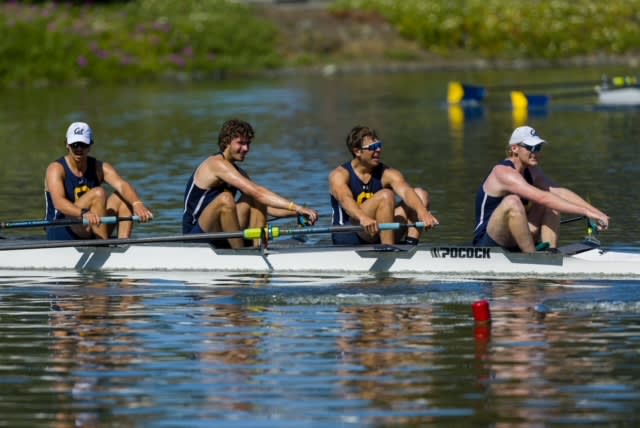 In addition to baseball (hosting New Mexico in the final nonconference series of the season) and softball (visiting No.6 UCLA with their postseason hope on the line), several other Cal spring programs are still going strong despite it being graduation weekend (at least the campus-wide commencement) this weekend.

The NCAA tennis tournament made some changes in 2022. The final championships, to be held in Champaign, Illinois this year, will be just the final 8 teams, rather than the final 16. An additional round of home-court advantage was granted and no .11 Cal (18-7) will have to win at No.6 NC State (25-5) to make it to Illinois.

On the season, Cal had some big wins over No.7 Texas A&M and No.8 Pepperdine. If the Golden Bears are playing at their peak, they could upset Wolfpack on Saturday. Talent and a bit of luck were what the Bears earned their first Pac-12 regular season title this year.

Cal routed Northern Arizona and Texas Tech in the opening rounds of the NCAA Tournament last weekend. No.4 Duke or No.13 Georgia will await the winner between Cal and NC State in the next round.

Despite having the top-ranked and 24th ranked doubles in women’s tennis, NC State managed to lose the doubles point to Tennessee in their last match. They won three singles in straight sets but the other three were in a decisive third set (or on their way there).

Cal has an experienced team, despite two key freshmen, that made it to the final 8 of the Indoor Tennis Championship back in January. In dual season, Bears also often find a way to win the doubles point despite just solid rankings.

This should again be the Cal lineup:

Valentina Ivanov was in the singles lineup earlier in the year but not the past weekend. Given how she is playing doubles, I would not be surprised if the one-time top player for the Bears does play in this Super Regional dual.

While Cal Women’s Tennis has an ITA Indoor Championship to contribute to Cal’s count of 99 team national titles, the program is still seeking its first NCAA team championship.

Top-ranked Cal Men’s rowing just might be the one to win that 100th Cal team national title in a few weeks. Although they lost an early-season head-to-head to Yale, the Cal Varsity 8 boat defeated Washington to find themselves as the top-ranked squad heading into the postseason (Pac-12 Championships on Sunday and IRA Championship for the men in three weeks and NCAA Championship for the women in two weeks).

In what is perhaps a rare concern for the four-time NCAA champs, Cal women might need a strong outing this weekend to secure their spot in the NCAA Championships. Cal has underperformed as a team in the recent month.

Dexter Lake in Lowell, Oregon – just outside of Eugene, will host this championship for the first time.

ROW ON YOU BEARS!

Also in conference championship action are the Cal Track and Field athletes. They will visit Eugene, Oregon this weekend as a tune-up for the NCAA Regional where the NCAA Championship berths will be at stake.

Needing a top-4 finish to advance as a team, Cal Women’s Golf finished 10th in the Stillwater Regional.

Cal women have made this stage for the 21st time in 22 years (when a postseason was held), but the

By comparison, the Cal men did not make the NCAA regional in 2022 nor had any individual qualifier in a weird year where all the upperclassmen stopped competing by the end of the season leaving Cal to be the youngest squad at the Pac-12 Championships. Nonetheless, great things are expected from many of the Cal underclassmen before their collegiate career is over.

Almost a month ago, No.9 Cal Men’s Gymnastics finished their season at the NCAA Championships in Norman, Oklahoma.

Bears do send 7 individuals to the NCAA Championship session, led by Noah Newfeld in the all-around.

Noah Newfeld finished the 11th in the all-around with a total of 78,798, posting a high score of 13,800 on parallel bars to tie for the 14th in that event. He added a 13,300 on floor and a 13,033 on vault to pad his score, capping off a solid sophomore season that saw him compete at the prestigious Winter Cup and earn MVP consideration from the College Gymnastics Association (CGA).

On pommel horse, Will Lavanakul only just missed out on All-American status, following up his 13,933 from Friday afternoon with a 13,366 to tie for 9th place in the field. Tyler Shimizu followed Lavanakul in the standings with a pommel score of 12,966, while Yu-Chen Lee posted a 13,466 on parallel bars.

Overall, Cal finished the season ranked ninth in the nation after finishing fifth in Session I of Friday’s qualifying round. Their highest-ranked event squad was the parallel bars group, who averaged a total score of 66,231.

Should You Worry About Data From Your Period-Tracking App Being Used Against You?

Opinion: This could be a game changer in the November elections