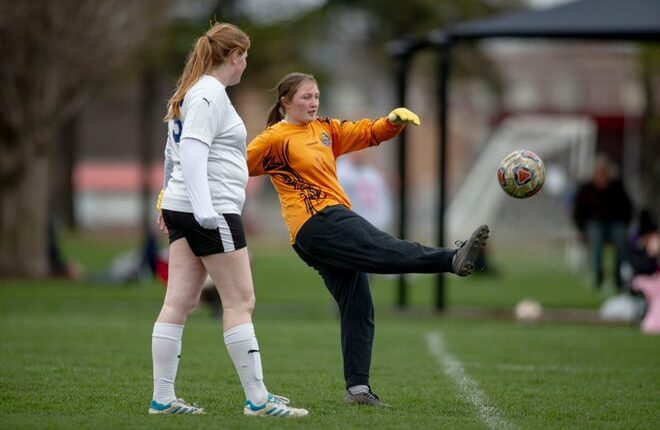 The Rockford Christian girls soccer team just keeps on pouring it on, winning its second regional title in a row, this time in dominant fashion with a 6-1 victory over Winnebago on Friday night.

“Now that’s more like it; that was a much more dominant game for us,” Rockford Christian coach Eron Harvey said. His squad fell behind 1-0 before rallying for an 8-1 win over Rockford Christian in the Class 1A regional semi. “It was good that first game of the playoffs gave us a challenge, and kind of woke us up. We came to play (Friday night).”

Jada Harvey, the Royal Lions senior forward who has led the way throughout, had a goal and five assists, and she now has 28 goals and 24 assists on the season. Her goal has been to finish with as many assists as goals, and she closed that gap on Friday.

“We have really showed that we are not just a one-girl or a one-player team,” Eron Harvey said. “They (Winnebago) really bracketed Jada and played her tough on defense. But that just fed into her strength. She loves to pass, and find the open shooter.”

She did, and often. Molly Henderson had two goals and Ellen Love had a pair of goals, and the Royal Lions have scored six or more goals in three of their last six games. Rockford Christian goalie Tess Combs has surrendered seven goals the entire season.

Now Rockford Christian (15-1), which absorbed its only loss of the season on April 30 to Class 2A Freeport, will take on Princeton in Tuesday’s Hinckley-Big Rock Sectional semi starting at 5 pm Princeton pounded Genoa-Kingston 6-0 to win its regional title on Friday night.