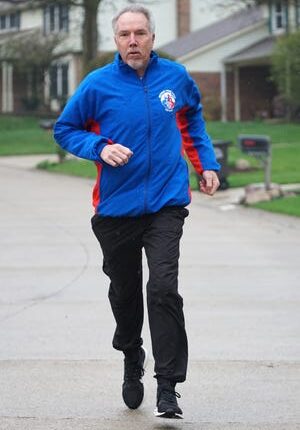 Never say never, but there are two things that are almost certain about Michael Webster.

Had the 62-year-old Northville resident not picked up a copy of the Detroit Free Press in early 1983, he likely never would’ve met his wife of 33 years, Vicki, 65, nor would he have become an avid runner, one who’s about to achieve a milestone most would never reach fathom.

So what the heck was in that edition of the newspaper?

It was an advertisement for the 1983 Freep Marathon disguised as a training plan. It was one of those couch-to-42-kilometers how-to guides that broke down how many miles you needed to run each week to ready yourself for the actual marathon by the time it rolled around in the fall.

“I bet I can do that,” Michael remembered saying to himself as he grabbed a pair of scissors, cut out the training plan and placed it under a magnet on his refrigerator. “I said, ‘I want to test myself. I think I can make it.’ I tried following it, but then I wasn’t following it too much. Just about everything you could do wrong I did during that first marathon.”

That was almost 40 years ago. Michael made it to the finish line. But it wasn’t pretty.

When he lines up to run the Freep Marathon once again on Oct. 16, it’ll be his 100th marathon.

That’s right. He went from reading a random article in a newspaper to becoming a hobbyist runner obsessed with pushing his body’s limits to its breaking points and even thriving in the process.

Here’s how he has gone from doing “everything you could do wrong” to now preparing to run No. 100

Giving up golf for distance running

Growing up in Peoria, Illinois, Webster thought he was going to be a professional golfer.

In fact, when he attended Richwoods High School he remembers being on the golf team and practicing at one of the local courses, the same course that Richwoods’ cross country team would run on. Webster remembers he and his buddies making fun of the runners as they’d run past them on the greens and tee boxes.

It’s kind of funny how that all worked out.

Webster’s father, who worked at the old Caterpillar headquarters in town, eventually convinced his son to give up golf and pursue a real career. Webster attended the University of Illinois, studied engineering and eventually landed with Chrysler, as the automotive industry is what brought him to metro Detroit.

Vicki Johnson ran track and field for one season while attending Westland John Glenn, but she never really took a true interest in running until the early 1980s.

But running wasn’t why she actually got into running.

After a breakup with an old boyfriend, she was distressed about her dating prospects. She didn’t know where she was going to meet a man, let alone find “the one.”

“I had family members who ran races, and I was looking to find a boyfriend at the time,” she remembers. “I went and watched a race and thought, ‘Wow, there’s a lot of guys here. Running might supply me with a healthy young man. What’s the shortest race there is? A 5K? I can do that.’

A family friend suggested she should join a running club. Lots of guys are serious runners nowadays anyways.

She eventually signed up with the Redford Road Runners in July 1986. That’s when she met Michael, who had joined the club a year earlier.

Not too long after meeting each other, they started dating. And on one of their first dates, they discovered that the 1983 Freep Marathon was the first time either had competed in a marathon.

“That’s the only time I have ever beaten him in a race,” said Vicki, whose 4-hour, 5-minute jaunt around downtown Detroit edged Michael’s time by 12 minutes.

They got married in 1988. Most of the wedding’s attendees were their running buddies. Michael even wore red running shorts underneath his slacks. By the time the dancing started at the reception, he was seen wearing those shorts and a pair of running shoes.

Running during ‘our younger, foolish days’

The Road Runners, who were originally organized by local running legend Randy Step, used to meet at Saint Robert Bellarmine School off W. Chicago and Inkster in Redford.

It worked out great for them because one of the club’s members had access to the school’s locker rooms. Runners could do their race prep and then take a shower so they didn’t have to drive home in sweaty clothes.

They’d run up and down Middlebelt and Merriman. But, even back then there were plenty of close calls while running against unpredictable traffic.

“Those were our younger, foolish days,” Michael said. “We would take risks you wouldn’t normally take today. We just loved to run and were competitive about it.”

The running clubs have helped Michael and Vicki train for most of their marathons and some of their top times. Michael’s best time at the Freep Marathon was 2 hours, 46 minutes in 1991; Vicki’s was 3 hours, 31.5 minutes in 1988.

The quest for 100 marathons

While Vicki has since stopped running marathons after having two children, Michael has run in about every prominent marathon around the country. That includes two New York Marathons — he ran the first marathon there following 9/11 — and 10 completions of the Boston Marathon, including him running in Boston about a month ago.

He’s already run three marathons this year. He completed the Walt Disney World Marathon in Orlando in January, did the Boston in April and followed it up with the Glass City Marathon in Toledo the following week, which put him at 99 marathons for his career.

He’s going to take a break from marathons for now. Part of that’s because he competes in triathlons during the summer. The other part is because he wants his 40th Freep Marathon to be his 100th overall.

“Once I got close to 90 marathons I started thinking: ‘Well, ya know, I guess I could get to 100, and if I run this one here, and this one on that day, maybe I can play it so I can get to 100 at the same time as I run my 40th Detroit Free Press Marathon,'” he said. “I run many shorter races, too, and I never really thought about running 100 marathons when I first started running. But I just kept plugging away, and I liked the experience at Detroit, so I just kept signing up for that race year after years.”

Thanks to Michael’s successful career, it afforded his family several vacations over the years. But it didn’t take too long for his children to realize that most of their trips out of state were organized around their father’s marathons.

And if a family trip wasn’t buttressed by one of Michael’s runs, he and Vicki went out of their way to find a 5K or fun run to compete in while they were in a new place.

The toughest part about being a year-round runner from Michigan is, in fact, forcing yourself to train year-round in Michigan. And given how brutal the cold was this past winter, finding the motivation to run isn’t always the easiest.

“Running the Disney Marathon in January requires you to get out and run,” Michael said. “I’ve talked to people who are local to Florida who were asking me how do I run and train in the cold. Somebody told me there if it gets below 50 degrees, they don’t even run because it’s too cold.

“I told them, ‘Man, in Michigan, if it’s under 50 degrees and you’re not running, you’re eliminating 6 months of the year.'”

So what’s next for this long-distance runner?

Michael doesn’t know how much longer he’s going to compete across the country after he runs his 100th marathon.

But he’s going to keep running the Freep Marathon every year until he’s physically unable to do it.

Other than that, he’s going to continue to sign up for races that interest him. To put himself through that much pain, both while training and competing, the race has got to be worth it.

“Afterwards, it’s certainly not a pleasant feeling,” he said. “I don’t know if you ever really get used to that filling, but you get accustomed to knowing what to expect. Even after running 99 of them, you get a sense of accomplishment and a sense of satisfaction afterwards, so that doesn’ don’t go away.”

And no other race has given him that kind of feeling quite like the Freep Marathon.

“It’s considered a hometown race to me, and it’s a nice course,” he added. “There are communities who come out and support you. There’s not travel required. It’s evolved and changed over the years, and it’s really unique in that sense. Now you can run into another country (Canada). When I first started running it, Now you can run across the (Ambassador) Bridge in the morning with the sun coming up, and that’s always a cool, unique experience.

“That’s what keeps me coming back.”

Free and Cheap Outdoor Movies This Summer in Champaign-Urbana