A century has gone by, and it’s still a wonderful life | News, Sports, Jobs 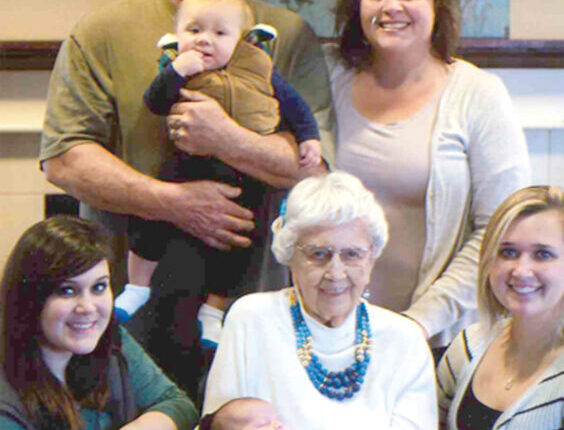 We all get an annual opportunity to celebrate another trip around the sun. However, it is quite rare for someone to complete that journey 100 times.

“I think it’s quite a milestone to tell you the truth,” says almost-centenarian Anna Mae Feldick Hutchins.

She was born on May 13, 1922 to Martha and George Cook, a fact which Anna Mae admits “doesn’t seem possible.”

She and her four sisters, Emmabelle Chaffee, Georgia Sailor, Frannie Nelson and Crystal Worden, were graduates of Blue Earth High School. Anna Mae herself donned her cap and gown in 1940.

“I think it was different than it is now,”she considers. “We had to obey, and of course my family was strict.”

Anna Mae chuckles as she recalls when her family wrote her a permission note to ‘pick flowers’ on Senior Skip Day so she could participate in the tradition with a clear conscience.

Anna Mae had a long life ahead of her following her graduation.

After attending Hamilton Business College in Mason City, Iowa, Anna Mae worked as a cashier at the First and Farmers National Bank in Blue Earth. Then, a chance meeting in 1946 changed everything.

That August, Anna Mae was visiting friends in Buffalo Center, Iowa, when she met a dashing young man named Lawrence Feldick as he was collecting the offering at a First Baptist Church service.

“When he passed the offering plate, he said, ‘I’ll meet you outside,'”Anna Mae recalls.

The pair convened after church, and Lawrence offered to take Anna Mae home. She declined at first, explaining she had driven her sister’s car, but Lawrence insisted.

“We went down to Blue Earth, and went to the ice cream shop. He didn’t have any money,”she laughs. “It all went from there.”

Lawrence had enlisted in the US Army, and informed Anna Mae shortly after their first date he would be leaving for basic training on Sept. 1.

The couple was clearly smitten, however, and did not forget their short time together while they were separated.

It was some time before the pair met at the end of the aisle. Following their engagement, Lawrence was stationed near Sarebo, Japan.

“The soldiers remembered riding the troop train through Hiroshima and Nagasaki, and saw the craters made by the atomic bombs which had been dropped there,”beth shares

Lawrence’s journey home was not exactly smooth sailing. He contracted malaria in Japan and was hospitalized there for a considerable time.

However, by March of 1948, Lawrence was honorably discharged from the army and returned home to Anna Mae.

The pair was united in marriage on Aug. 14, 1948, at First Baptist Church in Blue Earth.

They settled in Blue Earth, where Lawrence worked as a mechanic for 18 years at Holland Implement, formerly known as Eide Implement. They had two children: Larry Feldick and George Feldick.

“I had just lost my husband – I wasn’t going to go out with anybody,”Anna Mae recalls.

However, she met someone very special from her past in the fall of 1968.

Harold Hutchins had been a schoolmate of Anna Mae’s back in the day.

“I met him when I was three, and he was four,”Anna Mae says.

Harold’s family relocated to Duluth when he was 13, and the pair lived their separate lives for some time.

It was 1968, practically a lifetime later, when they were reunited.

“He came into the law office all dressed up in a black silk suit and top hat,”Anna Mae reminisces. “He picked me up and kissed me in front of all the girls. That sealed the deal.”

After that, Harold and Anna Mae did not wait long to start their new life together.

They were married on May 30, 1969, and then relocated to Battle Creek, Michigan where Harold began a career as an engraver for the International Paper Company.

The family explored several different Midwestern locations over the next few years, living for some time in Des Moines, Iowa, and Peoria, Illinois.

Then, Anna Mae and Harold returned to their childhood home in 1987 after Harold’s retirement.

“Harold had a heart attack, and we decided to retire in Blue Earth where we knew people,”she says.

The couple lived there happily for 20 years, but eventually relocated to independent living apartments in Fairmont in 2007.

Later, Harold contracted an illness, and the couple made one last move to Windom. They were able to celebrate their 50th anniversary in May of 2019 before Harold’s death on Nov. 18, 2020.

Harold took his final journey to Blue Earth the following May, where he was laid to rest in the Blue Earth cemetery.

She is in disbelief about her approaching birthday, but also could not be more grateful for the past century.

“It’s been a good life, and I am thankful for it,”Anna Mae says. “I’m so thankful I still have my mind. I’ve had two wonderful men, and I have done things to help people.”

Anna Mae particularly enjoyed teaching Sunday school and music throughout most of her life. She even directed a senior citizens group at a church in Peoria, an experience which she considers “Quite an accomplishment.”

She will celebrate her birthday next week with four generations of family members, from her sons to her great-great-grandchildren.

Her family hopes to collect cards to commemorate the occasion, which may be addressed to Anna Mae Hutchins at Sogge Good Samaritan Nursing Home, 705 Sixth Street, Windom, MN 56101.