Rockford IceHogs | IceHogs Weekly: IceHogs Ready for First Round of… 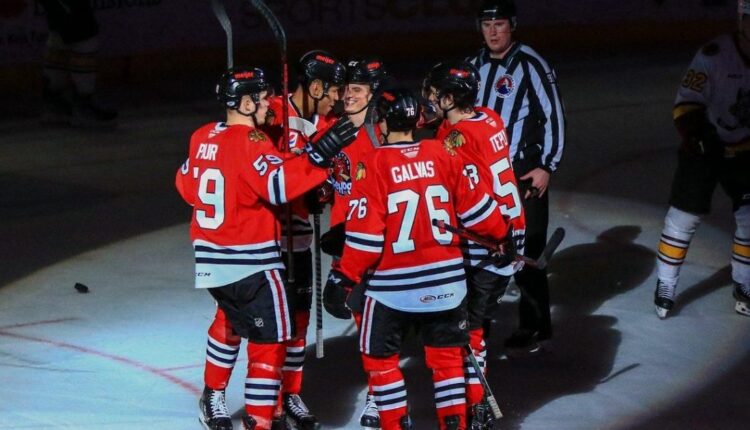 Wednesday, Apr. 27 at Iowa Wild
With the Iowa Wild (32-31-4-5) already out of playoff contention, the Rockford IceHogs (37-28-4-1) kept their foot on the gas with a 6-1 win over the Wild Wednesday night at Wells Fargo Arena in Des Moines. Forward Josiah Slavin led the way with two goals, while defenseman Isaak Phillips notched three assists. Recap & Highlights

Friday, Apr. 29 at Milwaukee
The Rockford IceHogs (37-29-4-1) dropped a close one 3-2 against the Milwaukee Admirals (39-28-5-4) Friday night at UW-Milwaukee Panther Arena. The loss solidified fourth place for the IceHogs, meaning they will meet the Texas Stars in the first round best-of-three playoff series beginning Wednesday, May 4 at BMO Harris Bank Center. Recap & Highlights

Saturday, Apr. 30 vs. Chicago
The Rockford IceHogs (37-30-4-1) closed out the 2021-22 regular season in front of 6,418 fans, the largest crowd of the season. The IceHogs fell 3-2 against the Chicago Wolves (50-16-5-5) Saturday night at BMO Harris Bank Center. Despite the loss, goalie Cale Morris set a franchise record for most saves by a rookie, making the most saves (51) in a regulation game in team history. Recap & Highlights

Forward Luke Reichel ranked fifth among AHL rookies with 57 points (21G, 36A) and fourth among first-year players with 17 power-play assists.

goaltender Arvid Soderblom sat 20th in the AHL with a 2.76 goals-against average and fifth among netminders with 1,187 saves.

Forward Michael Teply placed first among rookies and tied for second overall in the AHL with four shootout goals.

defenseman Ian Mitchell is tied for 17th among AHL blueliners with 35 points (11G, 24A) and tied for first with six power-play goals.

IceHogs and Stars Collide in Central Division First Round of 2022 Calder Cup Playoffs
The Rockford IceHogs their 2022 Calder Cup Playoff run with Game 1 their best-of-three first round series against the Texas Stars on Wednesday, May 4 at 7 pm at BMO Harris Bank Center. Game 2 is Friday, May 6 at 7 pm at the BMO and, if necessary, Game 3 is Saturday, May 7 at 6 pm at the BMO.

Morris Has Career Night to Close Regular Season
Goaltender Cale Morris made a career-high and team season high 51 saves on Saturday in the 3-2 loss to the Chicago Wolves. In his previous start, he made a then career-high 44 saves in the IceHogs’ 4-3 win at Chicago on Apr. 19.

IceHogs and Stars Collide in First-Round Calder Cup Playoff Matchup
The IceHogs and Stars meet in the postseason for the fourth time in their history and the first time since colliding in the 2018 Western Conference Finals where the Stars prevailed in six games to advance to the Calder Cup Finals. The two previous postseason gatherings featured sweeps. The Stars swept the IceHogs out of the postseason, 4-0, in their first meeting in 2010 while the IceHogs returned the favor, 3-0, in the first round of 2015.

Meijer First Goal Fundraiser
When the IceHogs score the first goal of each game this season, Meijer will donate $50 to Rock House Kids, a 501(c)(3) foundation helping feed Rockford’s inner-city youth in a safe nurturing environment. This season’s donation to Rock House Kids is currently $1,700!

Descended from Donuts and American Dream