A look at who’s on the ballot in C-U 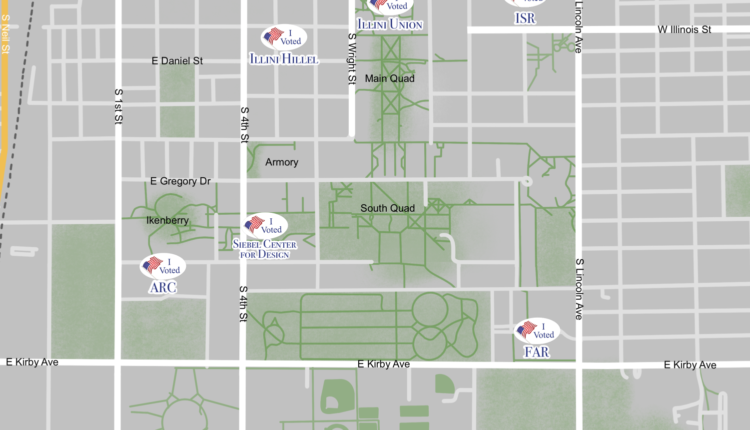 With election day around the corner and early voting in full swing, The Daily Illini has compiled a list of candidates running for major offices. In addition to the gubernatorial and congressional elections, a number of important county-wide elections are happening down ballot.

The biggest political race of the midterms is the Illinois gubernatorial election. Incumbent Democrat Gov. JB Pritzker is running for a second term against Republican challenger Darren Bailey. Hailing from Louisville, Ill., Bailey has served as a State Senator for the state’s 55th district since 2021 after serving a single term in the Illinois House of Representatives for the state’s 109th district.

Bailey has run his campaign appealing to downstate voters, often portraying Chicago voters as out of touch with the rest of the state. He has centered his campaign around reopening the economy, upholding second amendment rights, shaping policies to support farmers and finding solutions to education funding gaps. Bailey first made headlines in April 2020 when he south Pritzker over his stay-at-home mandate during the COVID-19 pandemic.

Conversely, Pritzker has focused his reelection campaign on upholding a reproductive rights, investing in clean energy and improving Illinois’ infrastructure. Pritzker became governor in 2018, when he beat then-incumbent Republican Bruce Rauner with 54.5% of the vote, the largest margin of victory in an Illinois gubernatorial election since 1994. Most major political polls have Pritzker leading Bailey by a sizable marginalthough that margin has been shrinking as we get closer and closer to election day.

Duckworth is running for a second term in the Senate, having been first elected in 2016. The incumbent has had a long list of political experience, serving two terms in the House of Representatives, three years as the director of the Illinois Department of Veterans Affairs and two years as the assistant secretary of Veterans Affairs for Public and Intergovernmental Affairs. As a senator, Duckworth has been credited with saving the Americans with Disabilities Act.

The Center for Effective Lawmaking has ranked Duckworth as one of the five most effective Democratic senators during his freshman term. In 2018, Duckworth became the first US senator to give birth while in office and was instrumental in changing senate procedures to allow senators to bring their children onto the senate floor.

Salvi’s platform consists of promoting independent energy production, limiting governmental oversight, securing the southern border, supporting the police and giving parents more control over education policies. Salvi, who worked as a former public defender, had no previous elected political experience. She won the Republican primary with 30.2% of the vote, just over five percentage points ahead of her nearest challenger.

Illinois’ 13th congressional district, which encompasses Champaign-Urbana as well as parts of East St. Louis and Springfield, features a contested election between Democrat Nikki Budzinski and Republican Regan Deering. Since this is the first election after the redistricting process, the new district has no incumbent.

Budzinski’s platform has centered around labor rights, drawing on her experience as a labor union leader. Budzinski has formerly served as the chief of staff for the Office of Management and Budget in President Biden’s administration. Although she hasn’t held an elected office, Budzinksi led Pritzker’s exploratory committee prior to his 2018 run for governor.

Regan Deering, the former chair of the Decatur Public Schools Foundation, won the Republican primary with 34.6% of the vote — winning by only 700 votes. Her campaign has centered around Second Amendment rights, increasing border security, promoting public safety and strengthening education.

This is the first election with the newly drawn 13th district, which has been redrawn to heavily favor the Democrats. Prior to the redistricting process, the district was represented by Republican Rodney Davis since 2013. The district has not been represented by a Democrat since 1895.

Illinois’ 52nd State Senate district covers CU, as well as Rantoul, Georgetown and Danville. The district was left largely unchanged during the redistricting process, with some less-populous rural areas either joining or leaving the district.

Democrat Scott Bennett is the current state senator for the 52nd District and is running unopposed in the election. Bennett was first appointed to the state senate in 2014 to fill a vacancy and has been reelected ever since.

Bennett currently serves on the Illinois Senate Agriculture Committee, Judiciary Committee, Labor Committee and Redistricting Committee. He received his law degree from the University of Illinois College of Law.

Illinois’ 103rd State House district covers the entirety of CU and was left unchanged during the redistricting process.

Democrat Carol Ammons is the incumbent state representative for the district and is running unopposed in the general election. Ammons was first elected in 2014 with 61.4% of the vote and is currently serving her fourth term.

Prior to her tenure in the Illinois House of Representatives, Ammons served on the Champaign County Board and the Urbana City Council. She currently serves as the co-chair of the Illinois House’s progressive caucus and is an active member of the Illinois Legislative Black Caucus. Ammons was one of only eight candidates to be endorsed by Bernie Sanders during his 2016 presidential campaign.

There are a number of local Champaign County offices up for election this cycle.

Champaign County Executive, an office responsible for overseeing the duties and businesses of running the county’s administration (similarly to a mayor’s duties within a city) is up for election. Democrat Steve Summers is running against Republican Ted Myhre.

Summers has served on the Champaign County Board for five years, where he currently serves as the vice chair and has previously served 16 years on the Urbana Board of Education from 1995–2011.

Myhre has held a variety of different positions throughout his life. He served in the US Army 82nd Airborne Division, taught high school chemistry and works as a volunteer EMT. Living in the Chicago suburbs for a period of time, Myhre worked with the People’s Resource Center, a nonprofit organization serving underprivileged communities in DuPage County. While with the People’s Resource Center, Myhre organized a curriculum to teach inmates in local jails computer skills.

Another important office up for election is the Champaign County Clerk. The county clerk is responsible for running elections within the county, as well as maintaining governmental records. The incumbent county clerk is Democrat Aaron Ammons, who has held the position since 2018. He will be running against Republican challenger Terrence Stuber.

As county clerk, Ammons has expanded voting opportunities at the University of Illinois, increasing the amount of voting locations from a singular location at the Illini Union to multiple across campus. Prior to being elected as the county clerk, Ammons served as an alderman on the Urbana City Council and co-founded the advocacy group Champaign Urbana Citizens for Peace and Justice.

Stuber currently serves on the Tolono Village Board, having assumed the position in 2015. Stuber made local headlines in August when responding “I don’t know if he truly was the winner or not” when asked if Donald Trump won the 2020 election. Later, Stuber said President Biden won the election, but said he remained skeptical about the 2020 election process.

Prior to Ammons’ election in 2018, the office had been held by Republicans for decades.

Also on the ballot this November is the Champaign County sheriff. The incumbent sheriff, Democrat Dustin Heuerman, is running against Republican challenger John Brown.

Heuerman was elected as sheriff in 2018, where he became the county’s first Democrat sheriff since the 1930s. As county sheriff, Heuerman helped close the dilapidated jail in downtown Urbana, as well as publishing the first sheriff’s office annual report in over 16 years. Heuerman is also one of five openly LGBTQ+ sheriffs in the US

Brown currently serves as the mayor of Savoy and has had over 32 years of law enforcement training and experience. Brown served with the University of Illinois Police Department for 30 years from 1990 until 2020, where he retired to become the deputy chief of police for the Tolono Police Department. Brown is also a graduate of the FBI National Academy.