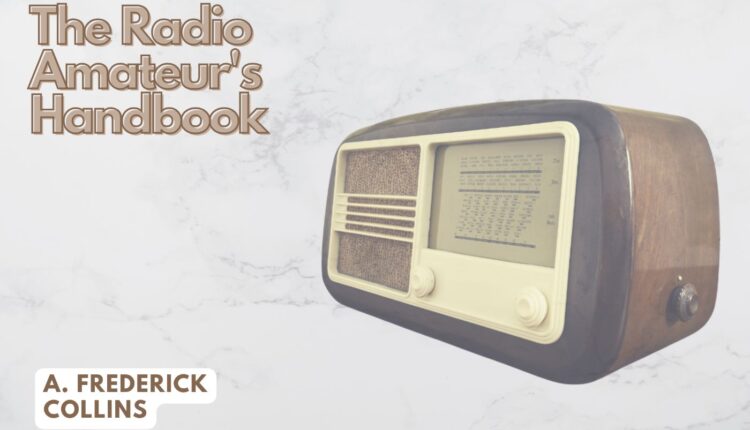 The Radio Amateur’s Hand Book, by A. Frederick Collins is part of HackerNoon’s Book Blog Post series. You can jump to any chapter in this book here: [LINK TO TABLE OF LINK]. Chapter VIII: A Simple Vacuum Tube Detector Receiving Set

Though the vacuum tube detector requires two batteries to operate it and the receiving circuits are somewhat more complicated than where a crystal detector is used still the former does not have to be constantly adjusted as does the latter and this is another very great advantage. Taken all in all the vacuum tube detector is the most sensitive and the most satisfactory of the detectors that are in use at the present time.

Not only is the vacuum tube a detector of electric wave signals and speech and music but it can also be used to amplify them, that is, to make them stronger and, hence, louder in the telephone receiver and further its powers of amplification are so great that it will reproduce them by means of a loud speaker, just as a horn amplifies the sounds of a phonograph reproducer, until they can be heard by a room or an auditorium full of people. There are two general types of loud speakers, though both use the principle of the telephone receiver. The construction of these loud speakers will be fully described in a later chapter.

Assembled Vacuum Tube Receiving Sets.–You can buy a receiving set with a vacuum tube detector from the very simplest type, which is described in this chapter, to those that are provided with regenerative circuits and amplifying tubes or both, which we shall describe in later chapters, from dealers in electrical apparatus generally. While one of these sets costs more than you can assemble a set for yourself, still, especially in the beginning, it is a good plan to buy an assembled one for it is fitted with a panel on which the adjusting knobs of the rheostat, tuning coil and condenser are mounted and this makes it possible to operate it as soon as you get it home and without the slightest trouble on your part.

You can, however, buy all the various parts separately and mount them yourself. If you want the receptor simply for receiving then it is a good scheme to have all of the parts mounted in a box or enclosed case, but if you want it for experimental purposes then the parts should be mounted on a base or a panel so that all of the connections are in sight and accessible.

A Simple Vacuum Tube Receiving Set.–For this set you should use: (1) a loosely coupled tuning coil, (2) a variable condenser, (3) a vacuum tube detector, (4) an A or storage battery giving 6 volts, (5) a B or dry cell battery giving 22-1/2 volts, (6) a rheostat for varying the storage battery current, and (7) a pair of 2,000-ohm head telephone receivers. The loosely coupled tuning coil, the variable condenser and the telephone receivers are the same as those described in Chapter III.

The Vacuum Tube Detector. With Two Electrodes.–A vacuum tube in its simplest form consists of a glass bulb like an incandescent lamp in which a wire filament and a metal plate are sealed as shown in Fig. 37, The air is then pumped out of the tube and a vacuum left or after it is exhausted it is filled with nitrogen, which cannot burn.

When the vacuum tube is used as a detector, the wire filament is heated red-hot and the metal plate is charged with positive electricity though it remains cold. The wire filament is formed into a loop like that of an incandescent lamp and its outside ends are connected with a 6-volt storage battery, which is called the A battery; then the + or positive terminal of a 22-1/2 volt dry cell battery, called the B battery, is connected to the metal plate while the – or negative terminal of the battery is connected to one of the terminals of the wire filament. The diagram, Fig. 37, simply shows how the two electrode vacuum tube, the A or dry battery, and the B or storage battery are connected up.

Three Electrode Vacuum Tube Detector.–The three electrode vacuum tube detector shown at A in Fig. 38, is much more sensitive than the two electrode tube and has, in consequence, all but supplanted it. In this more recent type of vacuum tube the third electrode, or grid, as it is called, is placed between the wire filament and the metal plate and this allows the current to be increased or decreased at will to a very considerable extent.

The Dry Cell and Storage Batteries.–The reason that a storage battery is used for heating the filament of the vacuum tube detector is because the current delivered is constant, whereas when a dry cell battery is used the current soon falls off and, hence , the heat of the filament gradually grows less. The smallest A or 6 volt storage battery on the market has a capacity of 20 to 40 ampere hours, weighs 13 pounds and costs about $10.00. It is shown at A in Fig. 39. The B or dry cell battery for the vacuum tube plate circuit that gives 22-1/2 volts can be bought already assembled in sealed boxes. The small size is fitted with a pair of terminals while the larger size is provided with taps so that the voltage required by the plate can be adjusted as the proper operation of the tube requires careful regulation of the plate voltage. A dry cell battery for a plate circuit is shown at B.

The Filament Rheostat.–An adjustable resistance, called a rheostat, must be used in the filament and storage battery circuit so that the current flowing through the filament can be controlled to a nicety. The rheostat consists of an insulating and a heat resisting form on which is wound a number of turns of resistance wire. A movable contact arm that slides over and presses on the turns of wire is fixed to the knob on top of the rheostat. A rheostat that has a resistance of 6 ohms and a current carrying capacity of 1.5 amperes which can be mounted on a panel board is the right kind to use. It is shown at A and B in Fig. 40 and costs $1.25.

Assembling the Parts.–Begin by placing all of the separate parts of the receiving set on a board or a base of other material and set the tuning coil on the left hand side with the adjustable switch end toward the right hand side so that you can reach it easily. Then set the variable condenser in front of it, set the vacuum tube detector at the right hand end of the tuning coil and the rheostat in front of the detector. Place the two sets of batteries back of the instruments and screw a couple of binding posts a and b to the right hand lower edge of the base for connecting in the head phones all of which is shown at A in Fig. 41.

Connecting Up the Parts.–To wire up the different parts begin by connecting the sliding contact of the primary coil of the loosely coupled tuning coil (this you will remember is the outside one that is wound with fine wire) to the upper post of the lightning switch and connect one terminal of this coil with the water pipe. Now connect the free end of the secondary coil of the tuning coil (this is the inside coil that is wound with heavy wire) to one of the binding posts of the variable condenser and connect the movable contact arm of the adjustable switch of the primary of the tuning coil with the other post of the variable condenser.

Adjusting the Vacuum Tube Detector Receiving Set.–A vacuum tube detector is tuned exactly in the same way as the Crystal Detector Set No. 2 described in Chapter III, in-so-far as the tuning coil and variable condenser are concerned. The sensitivity of the vacuum tube detector receiving set and, hence, the distance over which signals and other sounds can be heard depends very largely on the sensitivity of the vacuum tube itself and this in turn depends on: (1) the right amount of heat developed by the filament, or filament brilliancy as it is called, (2) the right amount of voltage applied to the plate, and (3) the extent to which the tube is exhausted where this kind of a tube is used.

To vary the current flowing from the A or storage battery through the filament so that it will be heated to the right degree you adjust the rheostat while you are listening in to the signals or other sounds. By carefully adjusting the rheostat you can easily find the point at which it makes the tube the most sensitive. A rheostat is also useful in that it keeps the filament from burning out when the current from the battery first flows through it. You can very often increase the sensitivity of a vacuum tube after you have used it for a while by recharging the A or storage battery.

The degree to which a vacuum tube has been exhausted has a very pronounced effect on its sensitivity. The longer the tube is used the lower its vacuum gets and generally the less sensitive it becomes. When this takes place (and you can only guess at it) you can very often make it more sensitive by warming it over the flame of a candle. Vacuum tubes having a gas content (in which case they are, of course, no longer vacuum tubes in the strict sense) make better detectors than tubes from which the air has been exhausted and which are sealed off in this evacuated condition because their sensitivity is not dependent on the degree of vacuum as in the latter tubes. Moreover, a tube that is completely exhausted costs more than one that is filled with gas.