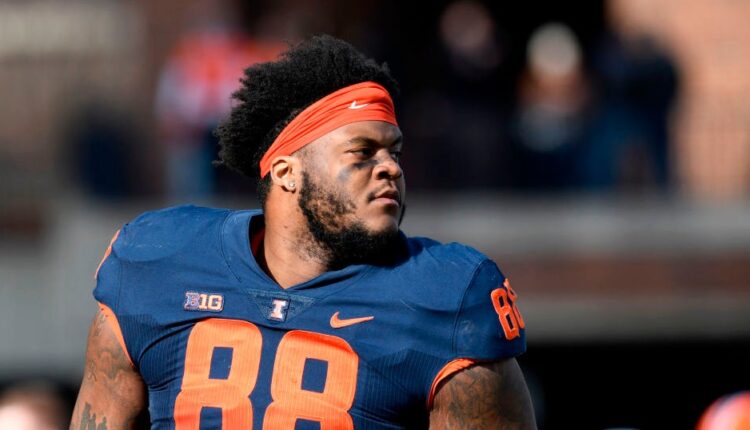 Randolph, a redshirt junior from Belleville (Ill.), emerged this season as an All-Big Ten third team selection by coaches and media. He was second in the conference in tackles for a loss (13.0) and had four consecutive games in September with a sack. He finished the year with 51 tackles, 13.0 tackles for a loss and 4.5 sacks to go with an interception.

“Dear Illinois nation,” Randolph began a 53-second video. “It has been a true blessing from God to wear the orange and blue for the past four years. I have made memories, friendships and bonds that will last a lifetime. I would like to thank my Lord and Savior Jesus Christ for putting me in position I am in today. I want to thank (Illinois head coach Bret Bielema), (defensive line coach Terrance Jamison) and the rest of the staff for believing in me and helping me get to where I am today. To my parents, I ‘m forever indebted to you and there are no words to describe my appreciation and love. To my brothers, I appreciate you all and it has been a true honor and a blast to be on the field with you boys.

“But the job’s not finished. Illinois nation, I’m back.”

Randolph offers great length (6-foot-5) and good athleticism for his size (300 pounds). He’s a versatile prospect who can play many spots on the defensive line. He’s not the most dominant pass rusher in the Big Ten, but he consistently disrupts the backfield and is incredibly stout against the run.

they counted me out, but they miscounted… pic.twitter.com/12AXIWWSaQ

“For one, they’re both playing at a really high level,” former defensive coordinator Ryan Walters said of both Keith Randolph and Johnny Newton earlier this season. “They both push each other every day in practice. Because they play similar positions, it’s hard to get the offense to slide to one guy or the other because now somebody is going to be single blocked. I think that is advantageous for both of them and their versatility on the inside is advantageous for our defense.”

Randolph was a big in-state recruiting win for former head coach Lovie Smith. Though he started playing football his junior year of high school, Randolph blew up thanks to his length, athleticism and potential. He chose Illinois over offers that included Florida State, Michigan State, Iowa, Minnesota and others.

In the last two seasons, both as a full-time starter, he has recorded 18.5 tackles for a loss, and all of his 8.5 career sacks along with 93 of his 109 career tackles.

“It’s something I’ve been grinding for,” Randolph said earlier this season when asked if he had the mindset for the NFL. “Whenever that time comes I’m going to have my big boy pants on, boots tied up tight and my mindset ready to go.”

What it means: This is a massive return for Illinois given the question marks after Randolph and Newton on the roster. Randolph should be a lock to be an All-Big Ten selection again and possibly more. Though Illinois is losing talent in the defensive secondary, the return of Randolph gives Illinois a huge anchor for the 2023 season.

Randolph’s length and athleticism make him an intriguing NFL prospect and he likely could have been drafted in the 2023 draft. Returning should help him improve his draft stock while providing a very talented bridge as Illinois continues to develop defensive linemen behind him.

There is just one defensive lineman from the last three (2020, 2021, 2022) high school recruiting classes remaining on the roster (Sedarius McConnell). Illinois has signed National Letters of Intent from Mason Muragin other Alex Bray in the Class of 2023. Illinois is still waiting on an announcement from Johnny Newton.