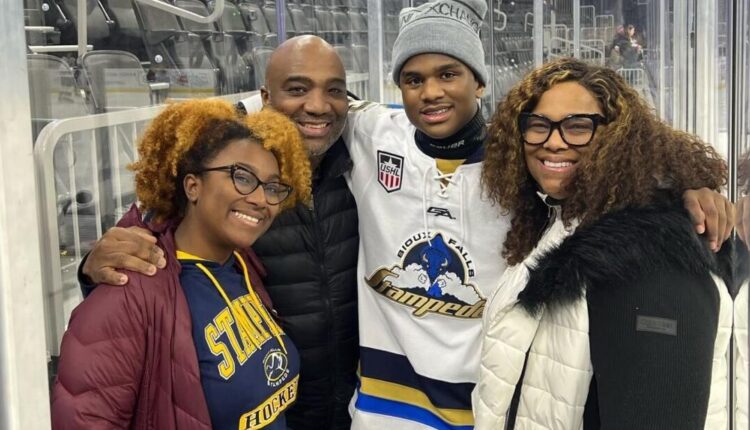 Get ready for another Champaign star on ice. This time, in hockey.

Grant Dillard, born and raised in Champaign, made his debut this weekend with the Sioux Falls (SD) Stampede in the prestigious United States Hockey League.

If it goes the way Grant hopes, he will someday be competing in the National Hockey League.

His parents, George and Dr. Tiffani Dillard (she is an obstetrician and gynecologist at Carle Foundation Hospital) and sister Chloe attended the weekend games in South Dakota, his first with the amateur team.

The 16-year-old was drafted last spring by the Stampede.

“This is giving him exposure to what the USHL is like,” the father said.

After a week in Sioux Falls, Grant will return to Bishop Kearney High School near Rochester, NY, where he plays an extensive season with the Bishop Kearney Selects, a AAA U16 team.

The squad is made up of players from eight states and two Canadian provinces. Grant is not the only Illinoisan on the roster; defenseman Ryan Santiago is from New Lenox.

At 6-foot-1 and 170 pounds, Grant is equal in height to the tallest players on the Selects.

He plays center, scoring goals and setting up his teammates.

“In basketball, you know how you have gym rats? He would be considered a rink rat or whatever they call it,” his dad said.

“He eats, breathes, drinks hockey,” his mom said. “When we’re at home, he has a hockey stick in his hand. He reads hockey draft books all the time, hockey magazines. Hey watches games. He’s a huge, huge hockey fan.”

You figure kids in hockey-crazed Canada put on skates about the time they learn to walk.

The game came a bit later to Grant, who mentioned the idea of ​​playing to his parents at age 7.

“Kind of on a whim, he told us that he wanted to try out hockey,” his mom said. “We were like, ‘Great, he can do that.’ From the second he was on the ice, he just loved it.”

When did the Dillards know their son was more than an average youth hockey player? They got an inkling when he helped the Champaign-Urbana Chiefs win a state championship.

When Grant was 10, former Illini hockey coach Nick Fabbrini told them “you might need to have him go to Chicago and play in AAA (the highest level),” George said.

Grant was able to able to meet the Illini hockey players and check out the locker room at the University of Illinois Ice Arena. That made a positive impression.

The Dillards followed Fabbrini’s advice and found Grant a team, the Chicago Fury, based in Orland Park.

Hockey was new to the family.

“We didn’t know anything about hockey other than seeing it on TV a little bit,” George said. “We didn’t really know what we were getting into.

“I don’t think we had any expectations about where we thought he would end up. And that might be because we were naive about hockey in general.”

Grant attended Champaign’s Next Generation School through eighth grade. He did online schooling during the COVID-19 pandemic for a year before moving to Bishop Kearney. He is now in the middle of his junior year.

Mom and Dad insist that if Grant wants to continue playing hockey, he must keep his grades up.

“He’s an A student,” Tiffani said. “When he started playing hockey, I felt like it’s great that kids should play team sports and that’s wonderful.

“He had to maintain excellent grades. As long as that happened, I was fine. He has been a model student. Teachers love him. He gets assignments done early.”

Grant is one of the few black players in the USHL.

“I think it’s inspiring for a lot of people, encourage, to be able to see a Black player at this level,” Tiffani said.

She said the son of a friend started playing hockey after watching Grant.

“To be able to see yourself represented in a sport that doesn’t typically have Black players and to finally see a Black player, it lets other young Black kids see that,” she said. “We see ourselves represented in basketball and football, but not often in the sport of hockey.”

Other parents want Grant to talk to their kids, and he is willing to oblige.

What’s next for Grant?

First, he will finish the year out at Bishop Kearney.

Then, he will move to Sioux Falls next year and be a full-time member of the Stampede. That will coincide with his last year of high school.

Playing college hockey is a strong possibility. A broken left leg he suffered in his sophomore year delayed some of the interest, but that is again picking up.

“We’re pretty sure he’s going to go the college route,” George said. “That he’ll get some scholarships. If you ask him, he hopes to get drafted. He hopes to pursue NHL ambitions.”

“In his mind, that is his goal,” George said.

Grant is the youngest of three. His oldest sister, Sharon, lives in Chicago. Middle child Chloe is a freshman at Howard University in Washington, DC

Grant returns to Champaign during breaks in the school year. He trains in Chicago during the summer.

George tries to attend all of his major tournaments.

The City of Rockford government says no to panhandling | news