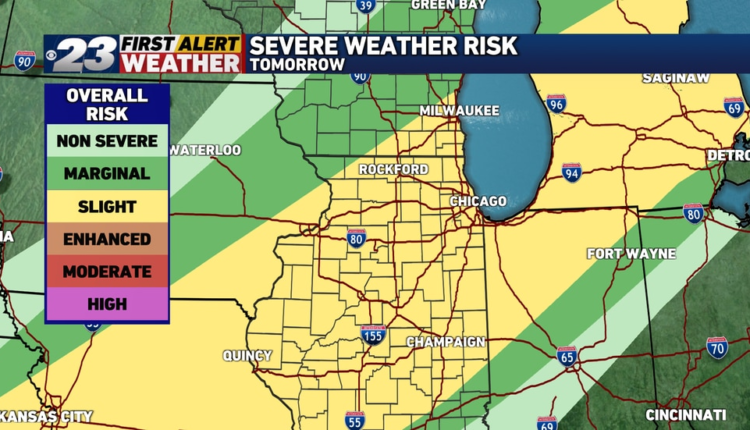 ROCKFORD, Ill. (WIFR) – As Memorial Day Weekends go, they really don’t get much better than this one. Aside from a few very quick sprinkles in a few spots Saturday, the Stateline was treated to warm, pleasant weather all weekend long, culminating in Monday’s hot, but certainly not humid, upper 80s to lower 90s.

Temperatures topped out at 91° in Rockford Monday, making it one of just 12 Memorial Days to record highs in the 90s.(Mark Henderson, WIFR)

The 91° registered at the Chicago-Rockford International Airport marks the fifth time the mercury touched at least 90° in 2022. While that may not seem like a lot, we’re still nearly a week away from the average date of when we see our FIRST 90° temperature in a normal year. What’s more, just six other times since the late 1800s have seen as many or more 90s by today’s date! If history’s any guide, it could mean we’re headed for a hot summer. Those six other years to see five or more 90s by the end of May went on to see, on average, 47 days of 90°+ heat for the year as a whole! 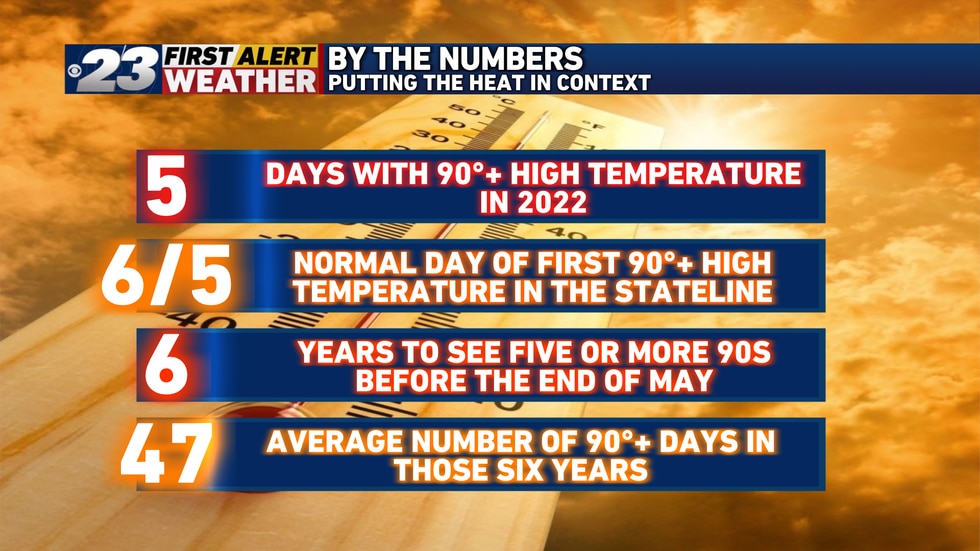 We’ve already had five days in the 90s this year. Normally our first such day doesn’t come until June 5.(Mark Henderson, WIFR)

Skies Monday night are to be mainly clear, which should allow for favorable viewing conditions for the POTENTIAL meteor shower, should it occur. Those interested in attempting to view it should plan on getting out of any densely populated cities by midnight. 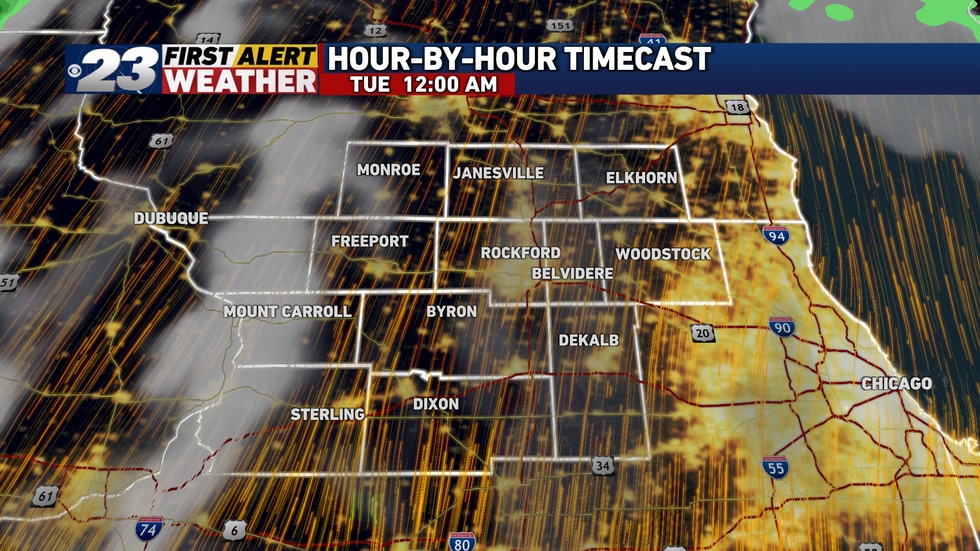 The same can’t be said about viewing conditions to our north and west, where ferocious thunderstorms have been roaming for much of the afternoon and evening, prompting the issuance of a myriad of severe weather watches and warnings. While there’s no imminent threat of severe weather here overnight, Tuesday could be a different story. 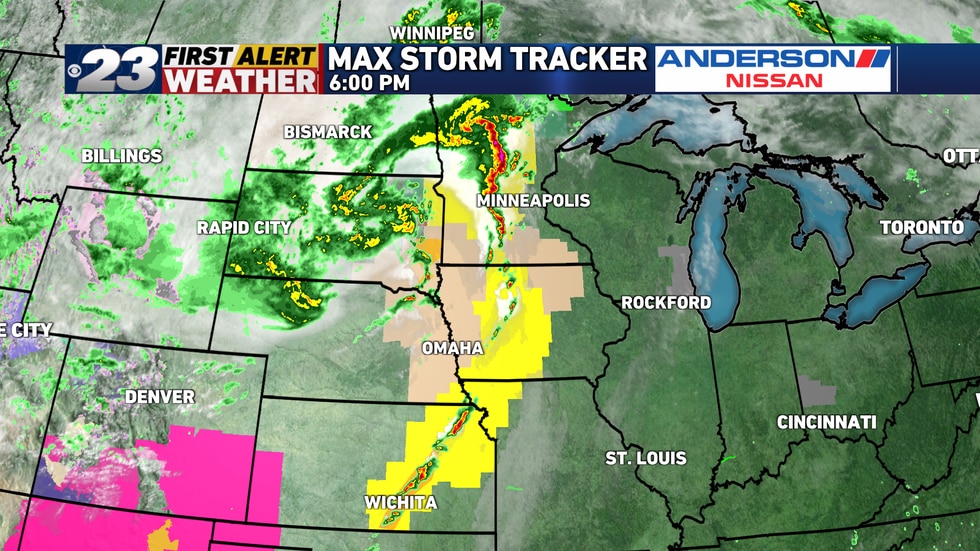 Nasty storms have formed from Minnesota to Kansas late Monday, prompting the issuance of several severe t-storm and tornado warnings. This is to be monitored locally Tuesday.(Mark Henderson, WIFR)

It’s possible that a few of the showers and storms currently occurring over the Central Plains may make it here late Tuesday morning. Should that occur, they’d be almost certainly weakening upon arrival. 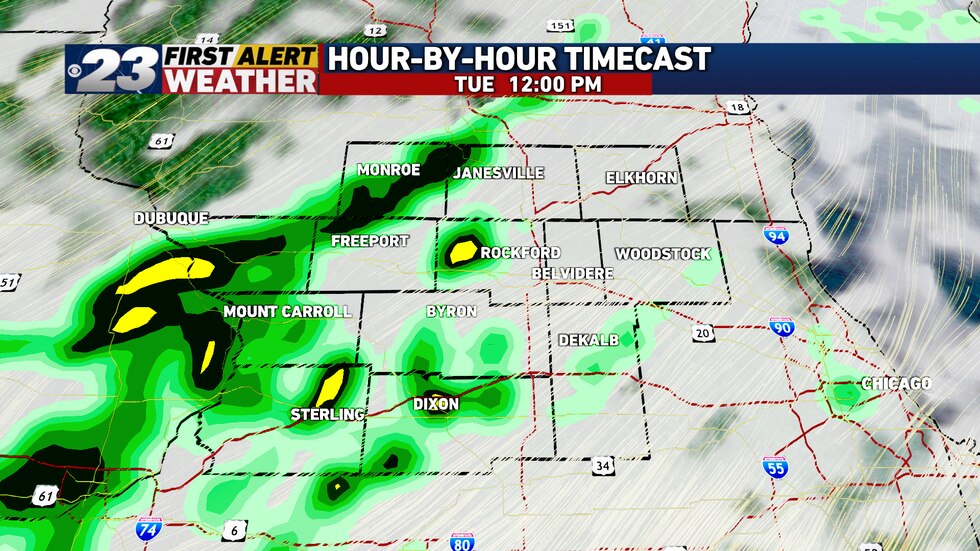 It’s a wildcard, but should a cluster of decaying showers and t-storms move overhead from the west around midday, as projected by Timecast, our severe weather threat MAY be slightly lower. This will be a wait and see case.(Mark Henderson, WIFR)

A second, potentially more potent cluster of storms is projected to develop either late in the afternoon or early in the evening Tuesday. Depending on just how much sunshine occurs before the storms’ development would go a long way in determining just how much of a punch they could pack. 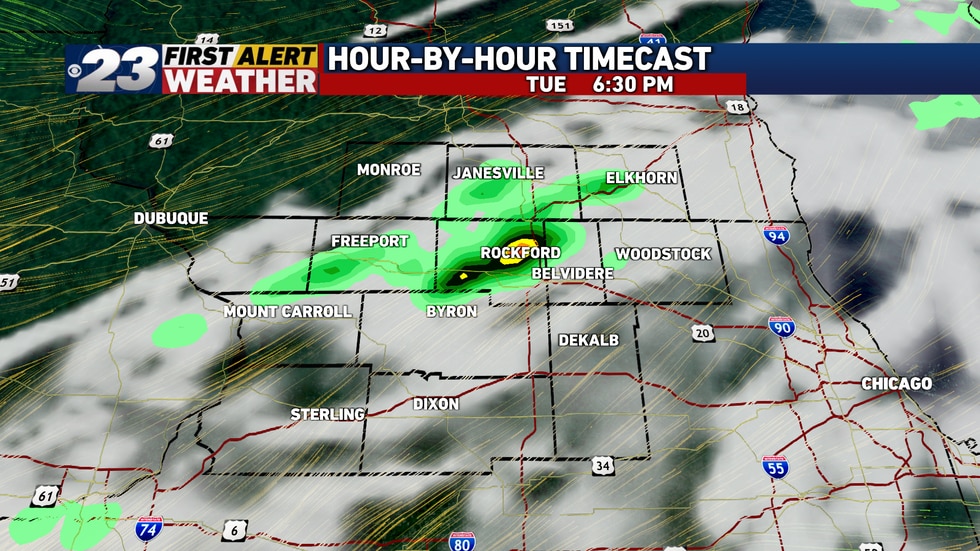 A few showers and t-storms will be entering the Stateline late in the afternoon or early in the evening.(Mark Henderson, WIFR) 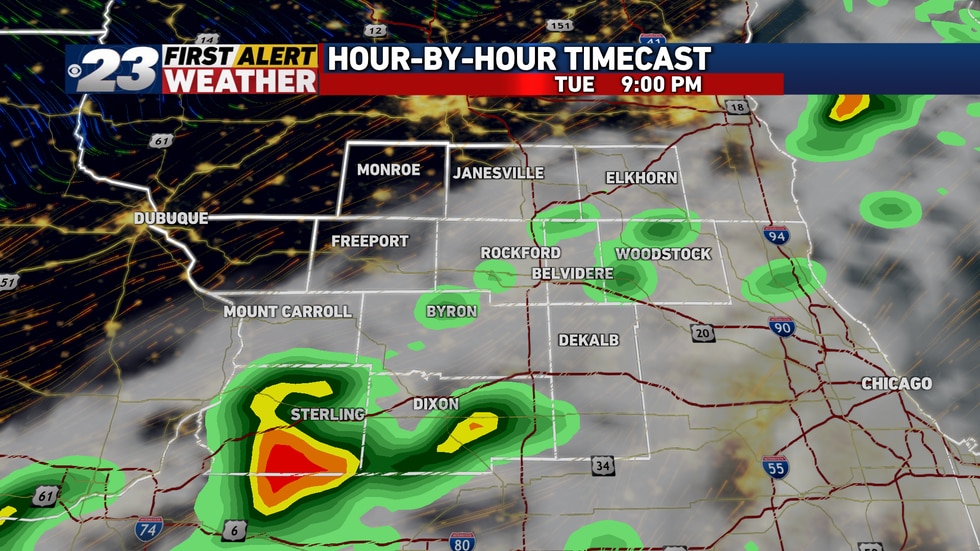 Clusters of scattered t-storms are to continue through mid-evening Tuesday.(Mark Henderson, WIFR)

As it appears now, we’ve identified the window of 3:00 to 9:00pm Tuesday as that when our storm threat’s at its highest. The Storm Prediction Center places virtually the entire Stateline in a Level 2, Slight Risk for severe weather during this time. Large hail and gusty winds would be our main severe threats, though isolated tornadoes are not out of the question. Close monitoring of the situation will be prudent throughout the day, and rest assured we’ll be doing just that. Just about the entire Stateline finds itself under a Level 2, Slight Risk for severe t-storms Tuesday afternoon and evening.(Mark Henderson, WIFR) 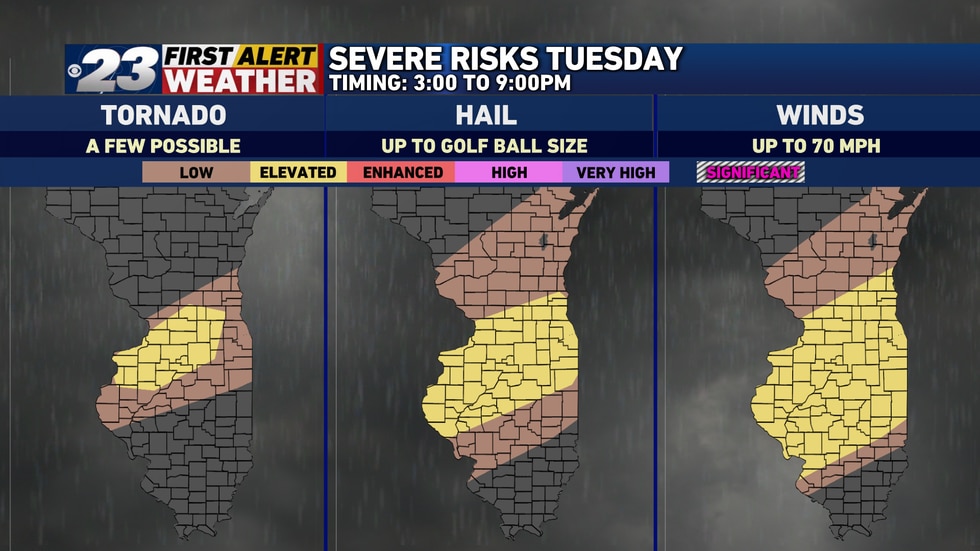 All modes of severe weather are in play Tuesday, with hail and gusty winds the main threats. Tornadoes aren’t impossible, either.(Mark Henderson, WIFR)

Rain quickly comes to end late Tuesday evening, and high pressure is to settle in very shortly thereafter. That’s to promise the return of sunshine Wednesday along with cooler, more seasonal temperatures in the 70s for the rest of the week. 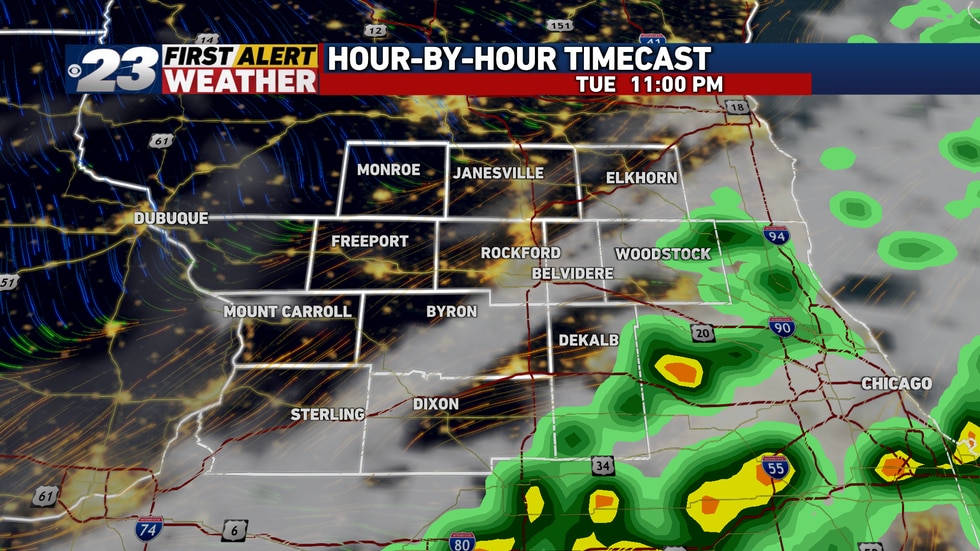 Showers and storms should be out of here by 11:00pm.(Mark Henderson, WIFR) 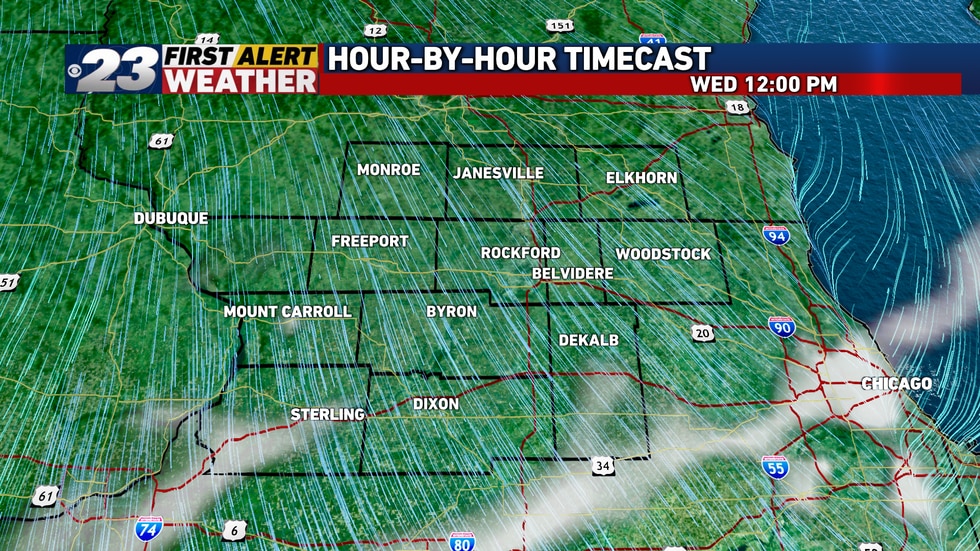 Sunshine’s due back Wednesday, along with more seasonal temperatures.(Mark Henderson, WIFR)

Indian-origin Us Congressman Gets Personalized License Plate ‘raja’; Here’s Why