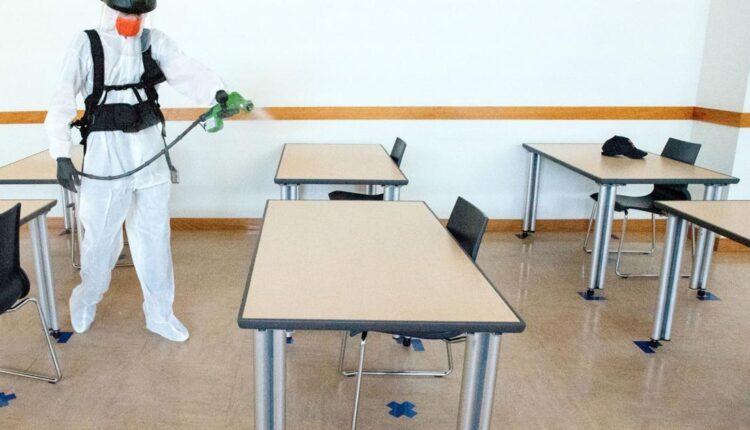 URBANA — The clock is ticking for the University of Illinois and its building-service and dining workers to reach a deal on a new contract and avoid a possible strike.

The three-year contract between the workers, represented by SEIU Local 73, and the UI expires Aug. 22, the first day of classes. If an agreement is not reached by then, the union can submit a 15-day notice of intent to strike.

On Wednesday, the sides will meet in the presence of a federal mediator, appointed in July at the request of the union. Another bargaining session is booked for Aug 19.

“We still believe that mediation isn’t necessary since we continue to meet and discuss the outstanding proposals,” UI spokeswoman Robin Kaler said. “We are willing to participate in the process in the interest of reaching an agreement.”

The biggest gap in negotiations, which began in November, remains pay and raises.

SEIU 73 represents more than 800 of the UI’s dining staff and building-service workers who cook food for students and clean campus buildings, respectively.

Many of the workers were deemed essential during the early throes of the pandemic, as the UI commenced an ambitious reopening plan for fall semester 2020 with a mix of remote and in-person instruction and campus-wide COVID-19 testing.

“They built a large portion of their reopening plan around the extra work we would do, to sanitize buildings, disinfect trash and come up with plans to clean quarantine floors,” he said. “We’ve done a lot for the university; we put our lives on the line for this university.”

To open negotiations, the union proposed its largest-ever set of raises: $5 an hour with subsequent $1-an-hour increases in the next two years.

The UI proposed a 25-cent-an-hour raise, then recently bumped it up to 67 cents the first year and 35 cents for the next two, Rojas said. The last guaranteed contract raises at least 39 cents an hour for all three years.

“They would like to see it higher, particularly because inflation and wage compression has been quite a big deal for them this calendar year,” Rojas said.

In May, 91 percent of participating union members voted to authorize a strike.

Earlier that month, the union sued the University of Illinois Board of Trustees in federal court for denying the public-comment requests of several building-service workers who wished to speak on working conditions and the state of negotiations.

“The UI Board of Trustees has a longstanding practice that does not permit the discussion of active negotiations in the public-comment forum at board meetings,” Kaler said. “SEIU requested time to discuss the status of negotiations.”

Lindley was one of the workers whose request was denied in May. Last month, he ended up speaking at the trustees meeting in Urbana, detailing some of his on-the-job struggles as other members held signs outside in protest.

“You need us to operate this university,” he told the trustees. “I beg you to re-evaluate where our priorities lie. It seems our priorities are building these really nice buildings with really nice features, but then we turn around and say we need to give the administration better raises.

“All we get is excuses as to why we can’t get a raise. As someone who has put my health on the line while everyone else was rightfully working at home, I’m glad you guys got to be safe at home. I wasn’t. I was here.”

Building and dining service workers last went on strike for three days in 2013. In 2019, the union threatened to strike on Move-In Day, but ended up reaching a deal before that.

The UI, Kaler said, prepares contingency plans to continue operations in the event of a strike.

SEIU Local 73 represents more than 31,000 workers in public-service positions across Illinois and Indiana.

“The majority of people I’ve talked to are ready to go; we’re preparing for a strike,” Lindley said. “We’ve been telling people to get their money saved up just in case. We’re going to negotiate. Obviously, we’d rather have a contract than go on a work stoppage, but we’re not going to take this level of disrespect.

“I don’t think the university realizes how angry BSWs and food-service workers have gotten.”

After ‘a Lot of Doors Shut in Our Face,’ Crusading Couple Celebrate Passage of Burn Pit Bill

OSF to commemorate 100 years of care in Urbana, Illinois