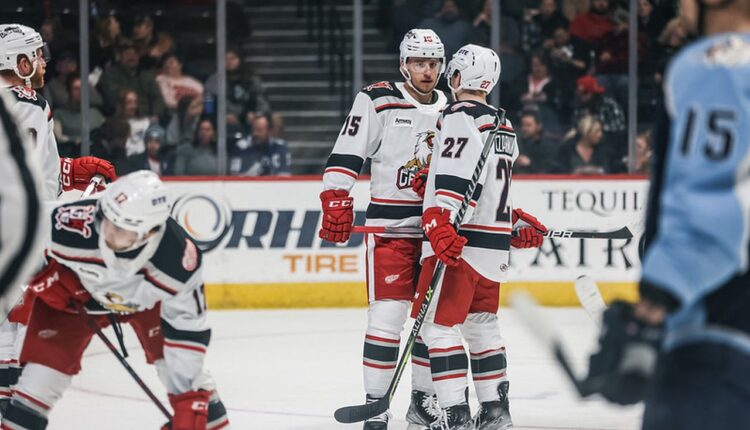 Coming out of the holiday break, the Grand Rapids Griffins looked to end 2022 on a high note with a trio of tough matchups against Central Division rivals last week.

ROLLING IN THE MUD

Their first contest of the week came on the road against the Rockford IceHogs, the American Hockey League affiliate of the Chicago Blackhawks.

Each team had chances in the early going, but neither team found the back of the net in the opening 20 minutes. Then, in the second period, David Gust helped put the IceHogs ahead with a pair of goals, including one on the power play.

The Griffins finally got on the board in the waning seconds of the frame, as Taro Hirose found the back of the net for the eighth time this season, with Grand Rapids only trailing by one heading into the third period.

However, unlike their NHL brethren, GR was unable to complete the comeback on Wednesday night. A tally from Lukas Reichel, along with Gust completing the hat trick, helped send Rockford to a 4-1 win, giving the ‘Hogs their third win on the campaign against the Griffins.

Austin Czarnik picked up his 12th assist of the season on Hirose’s goal, with Albert Johansson also etching his name on the scoresheet with his fourth helper of the campaign. Jussi Olkinuora was handed his seventh regulation loss of the year, stopping 28 of the 31 shots he faced.

The Griffins then were faced with a tough task, opening up a home-and-home Friday night with a longtime rival, the Milwaukee Admirals, the Nashville Predators’ AHL affiliate. The Admirals, who were sitting second in the Central at the time, came out flying in the first period, outshooting GR 22-11 in the frame. They were rewarded with goals from two of their top scorers in Kiefer Sherwood and Cole Schneider, giving them a 2-0 lead heading into the first intermission.

The scoresheet was padded a little more in the second period as Jimmy Huntington added to Milwaukee’s lead early in the stanza. The Griffins looked like they had fatigue, as they were only able to muster up six shots on goal in the final 40 minutes of the game, en route to a 3-0 loss. It marked just the second time this season that Grand Rapids was shut out in a game.

Victor Brattstrom made 36 saves in his fifth regulation loss of the season.

In their annual New Year’s Eve game, the Griffins came out with a little more bit against the Admirals. Though John Leonard opened the scoring for Milwaukee in the first period, Pontus Andreasson scored his first goal in eight games to level the score at one. Yet, Phil Tomasino scored with just a few ticks left on the clock to give the Ads a 2-1 lead after 20 minutes.

The Griffins controlled the play for most of the second stanza and finally found the tying goal in the final minute of the frame. Veteran captain Brian Lashoff found the back of the net for the first time this season, marking the first goal for the defenseman since April of last season. 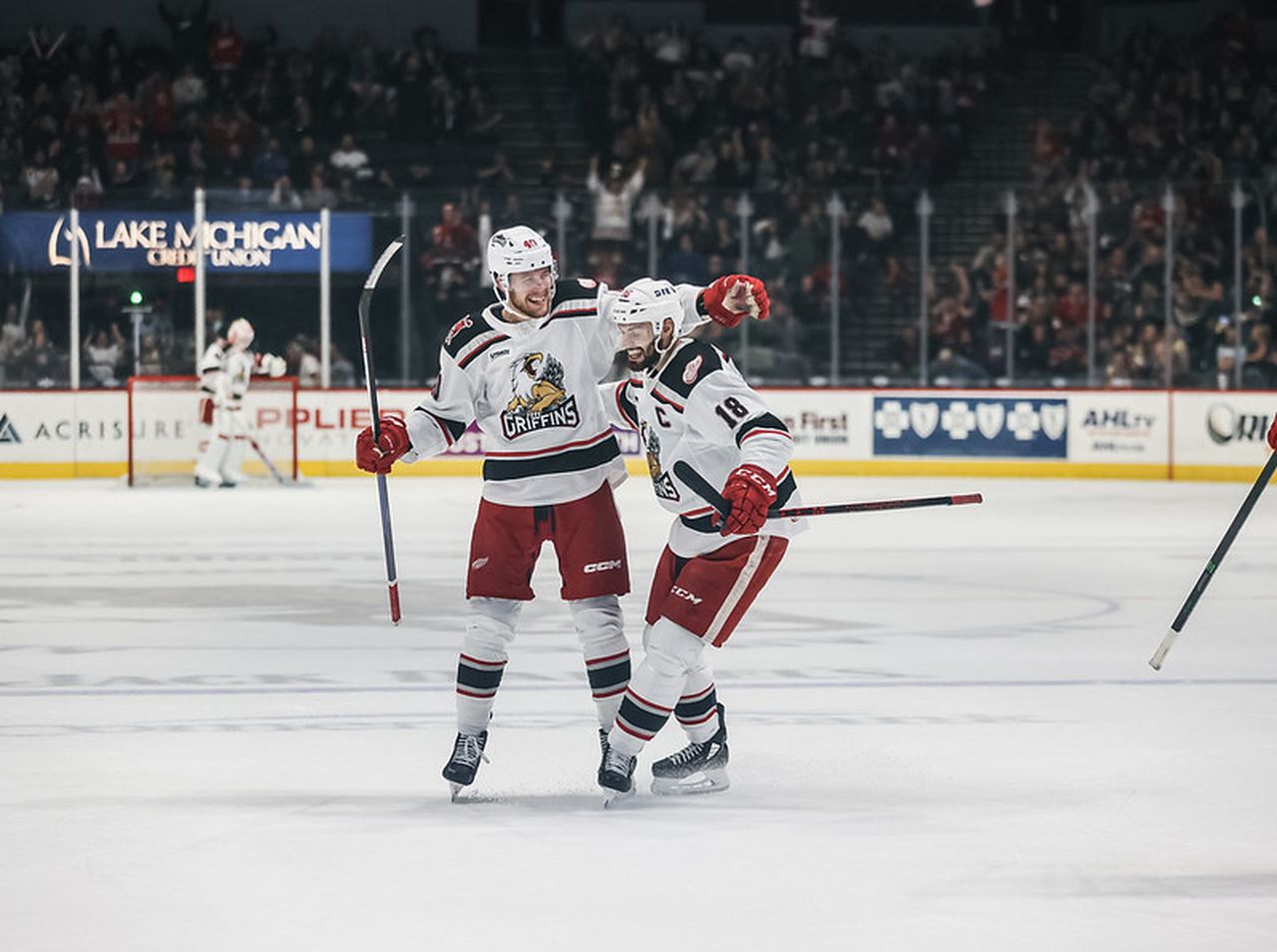 Lashoff (right) has 32 goals in his 605-game AHL career, all with the Griffins (Photo Credit: Nicolas Carrillo/Grand Rapids Griffins)

However, Grand Rapids was unable to complete the comeback. Luke Evangelista gave the Admirals their third lead of the night a little past the halfway mark of the third period, before Leonard potted an empty-netter to seal the weekend sweep for Milwaukee, handing the Griffins a 4-2 loss, their sixth defeat in their last seven games.

BACK IN THE SADDLE

A player that also struggled over the week with the Griffins was Jakub Vrana. The Red Wing mainstay was sent down to GR on a condition loan after recently exiting the NHLPA Player Assistance program that the Czechia native was entered into back in October.

The former Washington Capital did not mince his words after the Griffins’ loss on Saturday night.

“I didn’t perform well,” Vrana said to the media following the loss. “That’s the reality I’m facing, I have to get better.” 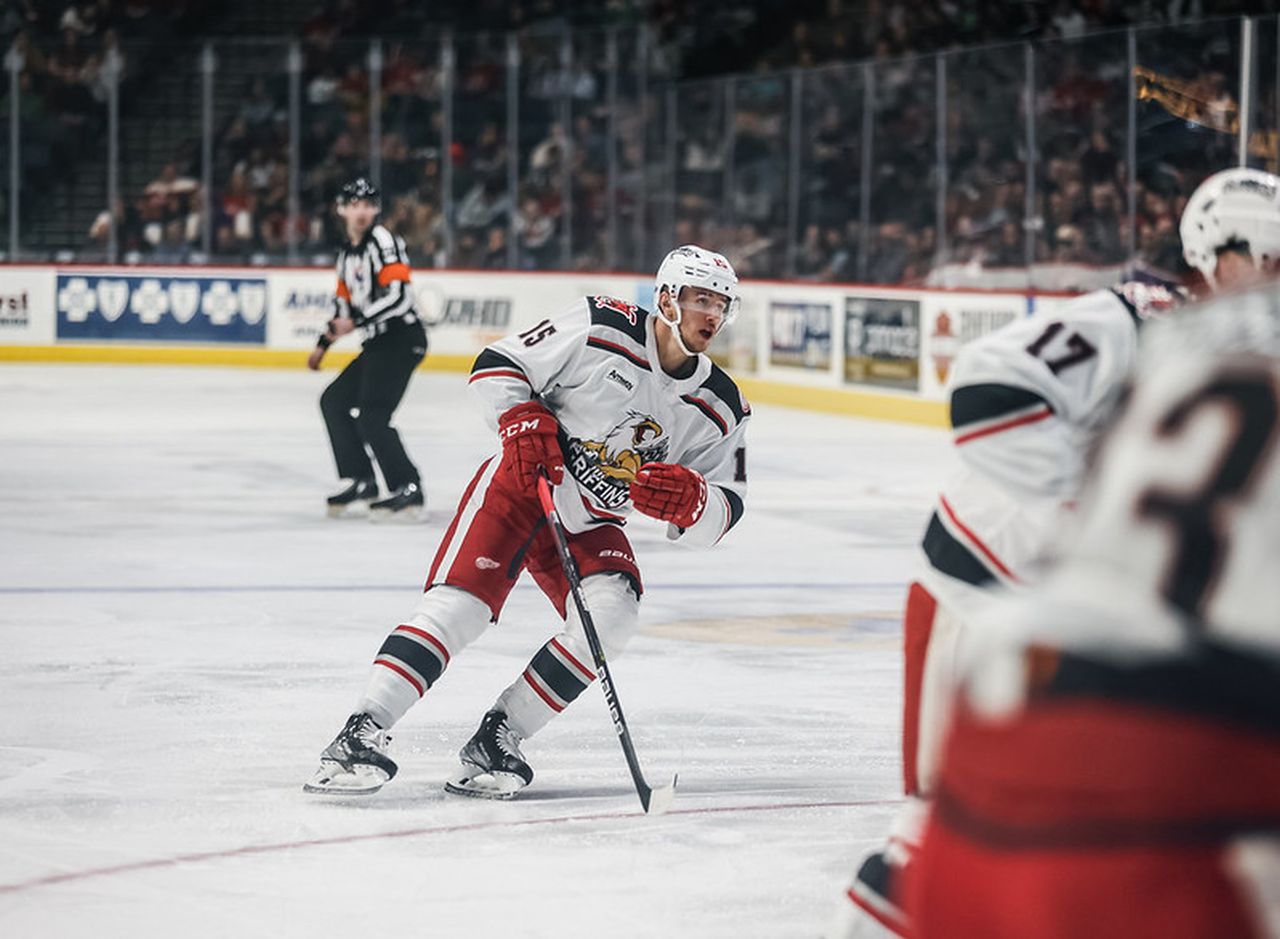 Grand Rapids’ game against the IceHogs was the first in about two-and-a-half months. Yet, rust was not an excuse Vrana was going to make.

“We lost three games, my game wasn’t there. We as a team have to find a way to start winning games, and the only way you can do that is to start working harder.”

With his three-game conditioning stint coming to an end, Vrana knows it is going to be a tough task getting back into the swing of things with the big club in Detroit.

“Whatever chance that is in front of me, I’m going to take it. I am facing adversity as it is, whatever I am supposed to do, I will do.”

Heading into 2023, the Griffins are 11-17-1, now last in the Central Division with 23 points, one back of the Chicago Wolves. They are now 20 points back from the Texas Stars for the top spot in the division.

Grand Rapids will continue their seven-game homestand this coming week, starting off with their rescheduled matchup with the Cleveland Monsters, affiliates of the Columbus Blue Jackets. The Monsters have slipped down the North Division standings, currently sitting sixth with 27 points, 13 back of the dominant Toronto Marlies. The Griffins ended their 2021-22 regular season against the Monsters, picking up a win in Cleveland, and went 7-0-1 against the Monsters in the season series.

Then, the Griffins will take on the Stars in their final series at Van Andel Arena on Friday and Saturday. Texas is on a roll as they arrive in West Michigan, having not lost in regulation since November, and went 9-0-1 in December. The GR has dropped three of the first four meetings this season with the Stars, including both in the opening weekend of last month.

You can watch and listen to the Griffins all season long on AHL.TV