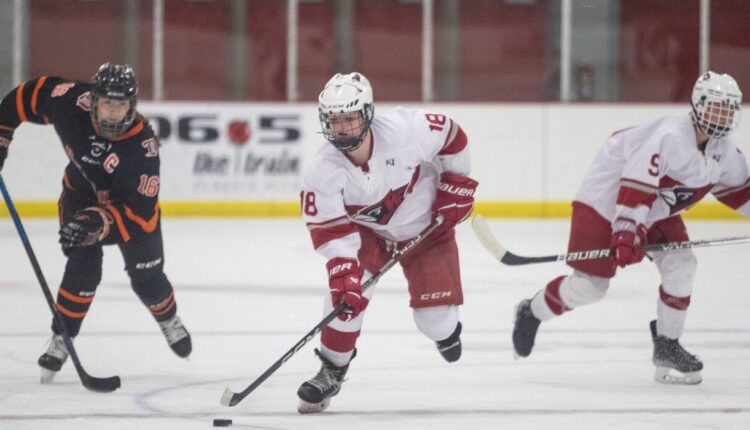 WILLMAR — The Delano/Rockford girls hockey team broke the game open with two goals in the third period en route to a 2-0 victory over Willmar on Saturday.

Kayleigh Olson scored the game-winning goal for Delano/Rockford. Her tally came during a penalty kill at 7:57 of the third period.

Delano/Rockford cemented his win with a power-play goal from Ava Reierson at 12:33 of the third period. Olson had the assist.

Willmar Cardinals battle with Delano during a home matchup at the Willmar Civic Center on Saturday, December 17, 2022 Willmar Cardinals sophomore Avery Olson and Kaelyn Wittwer of Delano battle for the puck during a matchup at the Willmar Civic Center on Saturday, December 17, 2022 Avery Olson of the Willmar Cardinals shoots the puck past a Delano defender at the Willmar Civic Center on Saturday, December 17, 2022

River Lakes fell to Luverne despite seeing a 45-save effort from goaltender Kaydence Roeske at Blue Mound Ice Arena.

River Lakes’ one goal came on the power-play at 12:08 of the third period. Abby Storms found the back of the net. Lucy Vettleson and Sophie Olson had the assists.