Glancing Back for May 2: Man, son-in-law engage in shotgun duel | 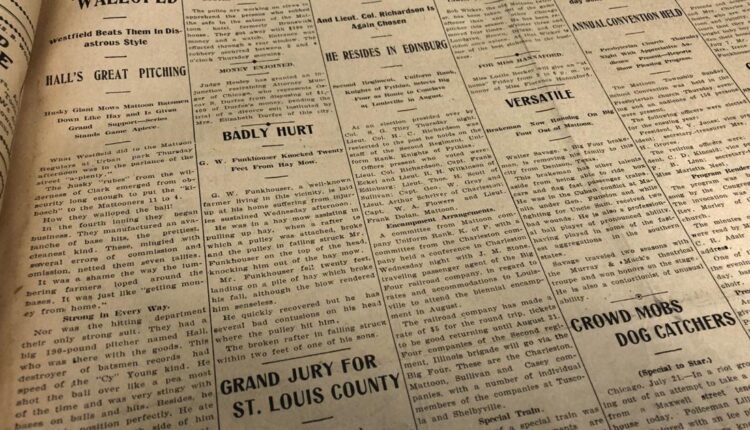 MATTOON – James Gatewood and his son-in-law, Ralph Beavers, both of Mattoon, engaged in a shotgun duel yesterday afternoon. No casualties were reported. Both men have been arrested. Beavers, who is married to one of Gatewood’s daughters, told police trouble between the men had been brewing for a week, brought on by marital difficulties. Early yesterday, Mrs. Beavers left her husband’s house, going to that of her father. Beavers was told, he stated, that Gatewood had threatened to shoot him if they met. The threat was carried out, Beavers said, when, on walking past Gatewood’s house, he was fired upon. He said he then went to his house and secured a shotgun. The two men then went to Moultrie Avenue, one stationed on Seventh Street, the other on Eighth Street, and let loose with their weapons. They were too far apart to do any harm, police said… CHAMPAIGN – Illinois Memorial Stadium will be built southwest of the university military field between First and Fourth streets. It will be south of Pennsylvania Avenue. The decision was reached at a meeting of members of the Board of Trustees, stadium committee and campus plan committee Friday in Chicago. President David Kinley said various sites were considered with the one chosen being an unanimous decision. It was the opinion of all, he said, that the location has ample room, the site is already owned by the university and therefore immediately available and, being high ground, it offers excellent drainage, has ample approaches and abundant parking space.

CHARLESTON – Charges filed in an Eastern Illinois University student court have been dropped against three students who picked the Martin Luther King Jr. Union on April 21, in protest of the Vietnam War. The charges, filed by an EIU administrator, allegedly the three students continued to picket the union after being told by a union employee they were violating university rules. The charges were dropped by Kenneth Karr, dean of personnel services at EIU against Gary Forrester, David Long and Clem Dabrowski… CHARLESTON – The Wabash Valley Association has chartered three planes for its May 15-17 trip to Washington in search of funds for Lincoln Lake and other water projects in the Wabash Valley. A hearing on Lincoln Lake will be held by the House Appropriations Committee on May 16. A second hearing by the Senate Appropriations Committee will be held that same afternoon. The trip cost is $128 and reservations should be made with Robert Carlisle of Charleston or John Dooley of Mattoon… WASHINGTON – J. Edgar Hoover, director of the Federal Bureau of Investigation since 1924, died last night at his home at the age of 77, Justice Department officials announced. Hoover, the nation’s chief law officer for 48 years, had become a legend in the United States, shaping the FBI into a massive, powerful federal agency. When Hoover took command in 1924, the FBI had fewer than 500 agents. There are now some 15,000 employees, including 6,700 special agents.

LONG BEACH, Calif. – Eastern Illinois University President David Jorns is one of six candidates for president of California State University of San Bernardino. Jorns was not on the EIU campus yesterday and unavailable for comment. A spokeswoman for Cal State-San Bernardino said Jorns was one of about 100 original applicants for the position. EIU’s Board of Trustees voted on June 21 to retain Jorns for another year at his present salary of $128,400. Jorns, 53, was named EIU’s president in September 1992… CHARLESTON – Sweeping all three categories, Charleston High School won the traveling trophy at the annual H-Oly-Saints Novice Speech Tournament at Bloomington Central Catholic High School. CHS placed first of 11 teams in the Experienced Division and first of 11 teams in the Beginners Division. In addition, the CHS production of “Bullshot Crummond” placed first in Group Interpretation. This is the seventh year of the last eight that CHS has won this traveling trophy. Individuals placing first in the tournament include Jessica Dunphy and Josh Newby, Group Interp; Rachel Vaughn, prose; Marie Poteete and Jamie Dunphy, dramatic duet acting; Reem Hasib, special occasion speaking; and Gena Harrison, first in prose.